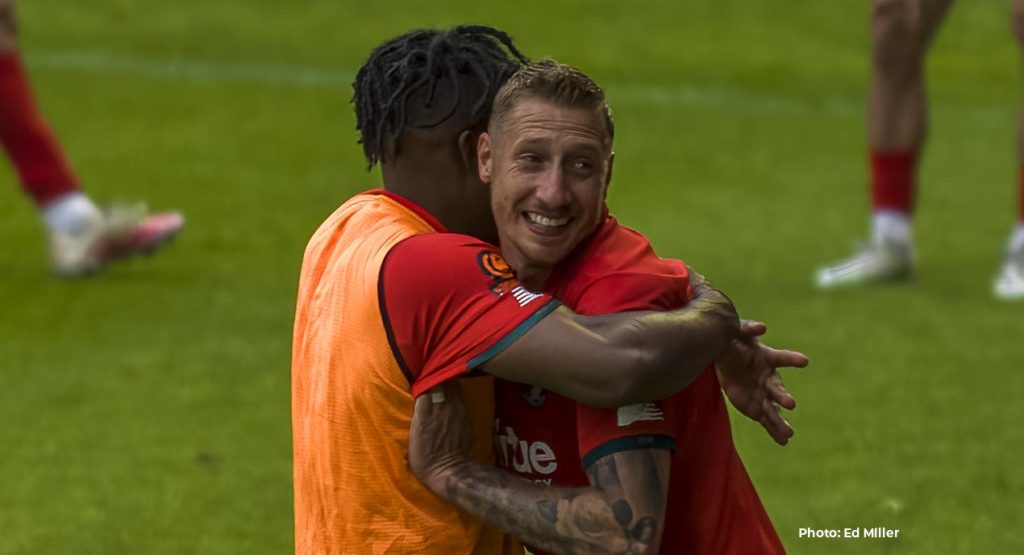 The Fleet are in the promotion final after Lee Martin’s extra-time goal finally broke the resolve of a determined Chippenham Town side who so nearly repeated their midweek feat of pushing a goalless draw to penalties.

The Fleet protected a proud record of winning every opening play-off match they have contested and although the possession stats weighed heavily in favour of the home side, the visitors kept the score in the balance to the very end.

Dorking Wanderers are now all that stands in the way of a double-Kent promotion from the National League South and it’s Meadowbank that will be the venue to decide that next Saturday.

Dennis Kutrieb made two changes to his side as in came Alex Finney and Dominic Poleon, with Will Wood and Craig Tanner missing out. It was an attacking lineup with Poleon and Shaq Coulthirst sitting in front of Rakish Bingham and Elliott Romain. Adam Mekki, meanwhile, was also restored to the squad, taking his place on the bench.

It was a fast start to the game, Fleet perhaps hoping to catch a jaded Chippenham (who in truth showed little sign of tiredness) but there were few chances for either side in those opening encounters.

The Fleet had the ball in the net twice in the first half, on the first occasion Coulthirst tucking away Jack Paxman’s delivery from the left. The assistant referee flagged, presumably for Poleon straying offside but it seemed harsh with the Fleet top scorer scarcely interfering with play.

It happened again on 36 minutes when some neat football saw Paxman exchange passes with Poleon in the box, Paxman then skipping through to fire over Will Henry from close range – again the assistant flagged, this time viewing Paxman to have run offside when meeting Poleon’s return pass but once more it seemed a borderline decision at best.

In between those two cancelled goals, much of the front running came from the red shirts with Paxman’s raids down the left numerous. On 27 minutes he found Bingham with one such foray but his firm shot found its way into Henry’s arms.

Chippenham had a couple of moments of promise of their own. Joe Hanks almost repeated his goal of two weeks ago with a shot from distance that produced an acrobatic dive from Louie Moulden that was perhaps more eye-catching than it was necessary!

Sido Jombati twice got his head in at crucial moments, with Alefe Santos’ cross causing problems on 25 minutes and then Spencer Hamilton trying similar just before half-time that Fleet’s No.6 cleared away from Mo Dabre.

Another big talking point occurred four minutes from time when Christian N’Guessan’s mazy run from midfield took him into the box, where he was barged roughly aside by Hamilton who had no intention of playing the ball but referee Sam Mulhall inexplicably let that one go.

Mr Mulhall didn’t exactly receive a rapturous welcome from home fans as he called time on the opening 45 minutes after preferring to issue only a warning rather than a card to Jordan Young who slashed the ball into the Plough End in frustration at being prevented from shooting on goal by the arrival of the half-time whistle.

It was more of the same at the start of the second-half, with Fleet utilising Paxman to deliver balls in that Chippenham defended well. Bingham opted for power on 52 minutes instead with a shot that rasped goalwards from 25 yards but just cleared the bar.

Hanks also went for distance for Chippenham as they countered on 59 minutes and he found some space to fire off a shot that took a potentially nasty deflection off N’Guessan and rolled just wide for a corner.

As the second-half progressed, Chippenham became more adventurous and enjoyed their best spell of the game. Their main opportunity to break the deadlock came 12 minutes from time when skipper Kieran Parselle slid in on a free-kick to the far post and connected at close range but rather than firing on goal he sent his effort through the six-yard box and out to safety.

Fleet picked things up after that. N’Guessan sent a shot just over and Bingham glanced a Chris Solly corner across the face of goal. Another Bingham header almost resulted in a freak goal as it bounced off the back of the No.9 and was deflected behind for a corner. Another penalty shout came as substitute Alfie Egan tried to cross into a packed box and as the ball was half-cleared, it seemed to hit Danny Greenslade’s hand – but again the referee was unmoved.

And so extra-time it was and Fleet went for the kill. Solly sent a corner over that might have snuck straight in before N’Guessan just missed Egan’s pass into the box. Jombati then slid the ball away from Henry on the floor but the Chippenham keeper managed to mop up the danger.

He could do little about Fleet’s next attack on 97 minutes. N’Guessan struck a high ball forward that Poleon flicked on to Paxman wide on the left. With a little space to run into, Paxman side-footed a neat pass inside to Lee Martin who had just enough time to take a touch and pick his spot as he curled it away from Henry’s outstretched glove to send the Kuflink Stadium into raptures.

In such a tight game and with such a slender lead, it became all about managing the 23 minutes left and Fleet performed the task well. Bingham had another shot on target on 108 minutes that Henry saved before Lee Martin’s brilliant lob over the goalkeeper from distance that arced towards goal but hit the crossbar.

Chippenham struggled to find a chink in the Fleet defence but they weren’t too far off eight minutes from the end of extra-time when a corner was met by Noah Coppin and then Greenslade inside the six-yard box before cannoning off two Fleet bodies and was eventually hooked away courtesy of the big boot of Lee Martin.

Ed Miller has been Ebbsfleet United's communications manager and programme editor since 2014 and responsible for the club website since 2007. Contact him on ed.miller@eufc.co.uk
PrevPreviousFleet announce women’s and girls’ teams for new season
NextPromotion Final ticketing detailsNext