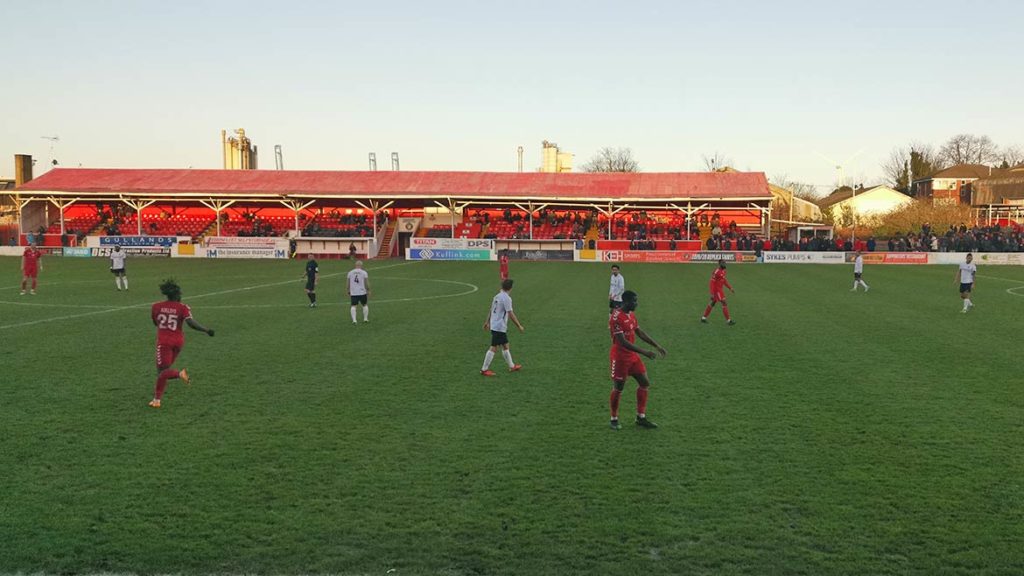 A place in the last eight of the Buildbase FA Trophy will have to wait as far as the Fleet are concerned with Kevin Watson’s side becoming the next victim of Royston Town’s impressive collection of cup scalps this season.

In a listless, uninspired performance, Fleet were forced into extra-time following a goalless 90 minutes but failed to summon a killer blow against the BetVictor South Premier Central outfit.

Fleet could have been a goal down in the early stages when Scott Bridges attacked from midfield and David Gregory attempted to gather, the ball spilled to Josh Castiglione and his effort seemed to hit Marvel Ekpiteta’s arm before his second effort forced Jamie Grimes to head off the line for a corner.

There were corners aplenty won by both sides but Fleet’s first real chance came from open play, Ayo Obileye’s long ball forward catching out Ed Asafu-Adjaye, allowing Tomi Adeloye to nip in and square it for Josh Umerah but his goalbound shot was blocked by the leg of Adam Murray with goalkeeper Joe Welch out of position.

Gregory’s poorly aimed goal kick at the other end went straight to Ofosu whose pace was too much for the Fleet defenders and he swung in a dangerous ball that Lawrie Wilson had to steer behind with Royston strikers looming.

Adeloye continued to be Fleet’s liveliest front player and another tidy cross into the six-yard box had to be hacked away by Bridges before Ugwu’s glancing header from a free-kick was met by Welch.

Royston forced a couple more corners and Fleet had a few hasty moments scrambling those to safety before Adeloye again supplied the ammunition for another chance on goal, hitting a low delivery along the floor that sat up for Ugwu but he failed to connect from six yards.

The first-half certainly had its moments, albeit broken up by the referee’s whistle, but the second half was a truly forgettable spectacle.

Scrappy, unimaginative football from both sides saw a labouring Fleet fail to really trouble Welch as Royston were buoyed by the lack of firepower their opponents offered.

That said, Fleet had a golden chance to take the lead three minutes after the restart when Frankie Sutherland’s dipping free-kick was met by Grimes, falling then to Ugwu and finally Umerah whose low shot was deflected behind by the outstretched leg of Welch.

There were strong shouts for a penalty on 55 minutes when another free-kick sailed into the box, Umerah going down under Ben Martin’s challenge, but Fleet were struggling to make any impact.

Sutherland harried in midfield with Jack King but nothing was sticking for the front runners. Substitute Josh Oyinsan saw a shot blocked in a desperate penalty-box scramble for Royston and the visitors began to call the shots for a spell as Fleet grew more and more ragged.

Tempers began to boil over as Fleet’s frustration grew, Royston’s antics designed to do just that and it worked for the visitors as they began to sense they had the measure of their hosts – and they had.

When Adeloye went off for John Goddard, Fleet lost more impetus up front, though the substitute’s 74th minute shot was a good one, blocked by the combative but effective Adam Murray.

There seemed little chance of either side winning it in normal time, summed up in time added on when Ugwu’s cross sat up beautifully for Jermaine McGlashan with the goal to aim at but he scooped it wide.

And so it was ironic that a goal came almost immediately in extra-time. Just three minutes were played when Wilson was left in no man’s land with a high ball and his header didn’t gain much ground, allowing Castiglione to get round the back and cross to the far post where two Royston players were waiting. Oyinsan got his head to it and the ball bounced off the line and out – but with enough on it to convince the linesman that it had crossed the goalline.

Fleet struggled to really set about Royston and there was little panic in the visitors’ ranks. McGlashan sent Ugwu’s decent cross from the left wide of the post and that was as much as the home side mustered in the first period, though Sutherland tested Welch with a stinging shot that was flagged offside anyway and Wilson’s run and shot was met by the goalkeeper.

The second period was no better and Royston could have wrapped it up when Brandon Adams raced clear on the break but Gregory was out quickly to deny him.

The Crows made no mistake moments later, with five minutes left, catching Fleet cold from a throw-in and Matt Bateman waltzed through and lashed a low shot into the back of the net for 2-0.

The five minutes of time added on merely prolonged the agony for the Fleet, Goddard hooking an effort wide via Ben Martin’s block when he should perhaps have scored but by then, all hope was gone.

Ed Miller has been Ebbsfleet United's communications manager and programme editor since 2014 and responsible for the club website since 2007. Contact him on ed.miller@eufc.co.uk
PrevPreviousFeast or famine for the Crows?
NextListen to the fans for an honest opinionNext