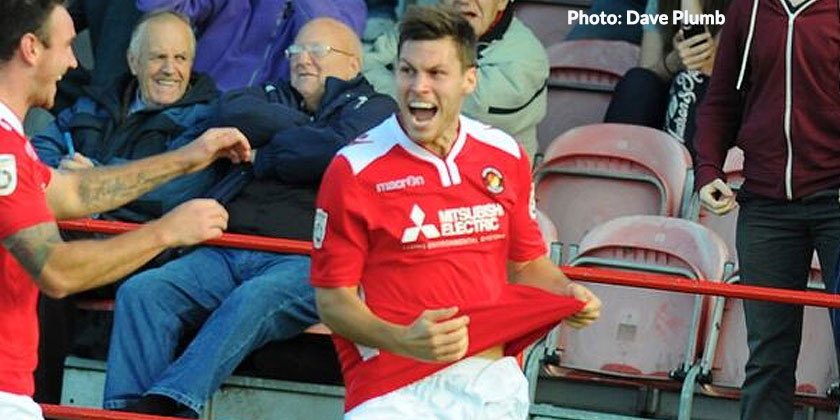 Charlie Sheringham “could be like a new signing,” Daryl McMahon has told FleetOnline.

The 27-year-old striker returned from a month on loan at Bishop’s Stortford earlier this week and is set to see his first game time in an Ebbsfleet shirt since a substitute appearance in McMahon’s second game as caretaker manager.

That was 11 months ago, at Maidenhead, but Sheringham has not featured in a starting line-up for a full 12 months, in Steve Brown’s last game in charge against Gosport Borough.

“Charlie coming back is a big boost for us,” McMahon said. “He had that purple patch last season, scoring 10 goals before his injury. The last two months or so in training he’s been outstanding, every day his movement’s been terrific and he’s been training really well.

“He could be like a new signing for us as it’s been so long since he’s played for the club. He had five games on loan and he’s shown no signs of any effects from his injury, so with that cleared up he’s firing on all cylinders.”

It’s been so long, in fact, that of Fleet’s starting line-up last Saturday, Sheringham had played alongside fewer than half of them.

Meanwhile, McMahon stated that Adam Cunnington’s move in the other direction, to Woking on loan, was simply to get the striker regular game time and more opportunities in front of goal. “Adam going out and Charlie coming back in is all about their both gaining and getting game time. Charlie’s got some and comes back into the picture, Adam needs to gain more minutes and hopefully this will get his confidence and sharpness back up. He was unfortunate with an injury in pre-season and not having the opportunity since but I know he’s a very good player and I still think he has a big part to play for us this season.”

Fleet also have another attacking option further down the line in Shilow Tracey, who spent time training with Tottenham this week. McMahon says the Premier League side liked what they’d seen and hope to have Tracey back for another look. Another club has also contacted the Fleet boss about the youth player, who will feature in the FA Youth Cup tie at Gillingham next Tuesday.

“We’ll take our time with Shilow,” McMahon said. “If nothing comes out of it with Spurs, I’m sure he’ll be in our first team at some stage this season. He’s a terrific talent and I really believe in his ability.”

Ed Miller has been Ebbsfleet United's communications manager and programme editor since 2014 and responsible for the club website since 2007. Contact him on ed.miller@eufc.co.uk
PrevPreviousCards clinch Cunnington loan
NextFrustration’s not getting the best of us, says MaccaNext