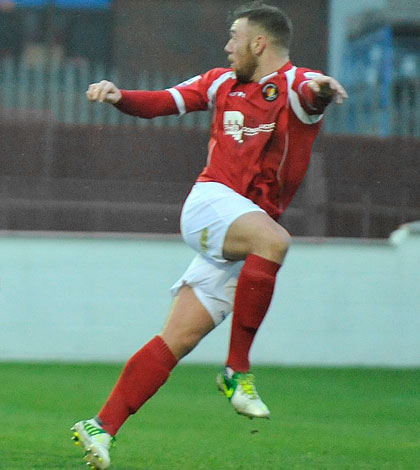 A late Billy Bricknell goal was nowhere near enough to give the Fleet a share of the spoils as Boreham Wood made it a wretched day in Hertfordshire for the men in red.

Top of the form table before last Saturday, Fleet have now gone three games without a win as the backlog of away fixtures begin to take their toll – and this latest performance must be quickly purged from the system if the team want to consolidate a play-off spot that looked theirs for the taking a short while ago.

Steve Brown brought Chris Sessegnon in at right back ahead of Joe Howe and started Ben May up front alongside Michael Thalassitis, with Billy Bricknell dropping to the bench.

Boreham Wood, fresh from a 4-0 win at Concord in midweek, clearly began from where they left off and were rampant from the first whistle, with Fleet never able to gain a toehold in the game. Several corners and crosses in the opening period set the Fleet defence on edge. A fifth minute corner saw Matt Whichelow unmarked from 10 yards set up Lee Angol and he was just off target.

Two minutes later and a poor clearance conceded another corner. Whichelow flung it in and Luke Garrard flashed a header across goal with the visiting defence slow to react. Angol’s width and pace was gaining Boreham Wood plenty of space to cross the ball and with Fleet hesitant to counterattack, there was little to stop a constant supply from the flanks.

In the 14th minute he again got free to win a corner, Garrard sent it over and Angol was in the middle to nod it just over the crossbar. A goal looked to be only as far away as the time it took the home side to find their shooting boots and they did so two minutes later. A free-kick from Greg Morgan glanced off the head of Thalassitis and looped up over Preston Edwards to give the home side a deserved lead.

Still Fleet failed to respond and Garrard had another effort headed into Edwards’ arms from a free kick before Callum Reynolds met a cross which he put wide.

The visitors lacked punch and but for a Ben May header off target on 24 minutes could have gone the entire first-half without a concrete chance. That said, May had a good shout for a penalty minutes later when he was clearly pushed in the back from a Daryl McMahon set piece but the referee deemed it a fair challenge.

The referee then became centre stage seven minutes before the break when he pulled up with an injury – much to the relief of Fleet fans who were increasingly disgruntled by their side’s and the official’s performance. There was a 25-minute delay while a replacement official was sought with the teams being sent into the dressing rooms only to re-emerge to play the final seven minutes of the first-half.

That pause, and then finally the scheduled half-time break, did the Fleet no good at all as they were caught napping two minutes into the second half. A long ball bemused the Fleet defenders who allowed it to bounce behind them and Angol duly took advantage, promptly gathering the loose offering and firing it over a stranded Edwards for 2-0.

Fleet saw a little more possession as Boreham Wood sat back with the minutes ticking away but they were unable to do anything with it. Anthony Cook sent a free-kick wide on 56 minutes and McMahon’s aim was off as his 65th minute shot went over the bar before Fleet made two changes. The first was tactical, Bricknell on for Alex Osborn, the second enforced – with Shane Huke replacing an injured colleague (in this case Yado Mambo) for the second Saturday running.

The visitors attempted a late rally and May forced goalkeeper James Russell into a save from his header. Russell continued to earn his corn with an excellent save from Bricknell but the ball fell to Cook who really should have hit the target from close range but blasted over the bar.

Had that gone in, who knows if Fleet could have grabbed a very unlikely point as a minute later Bricknell prevented a second successive blank for his side when he headed home Aiden Palmer’s cross. Four minutes of added time gave brief hope to the travelling fans, but their side mustered nothing more and must go to Gosport on Thursday hoping the south coast club will be suffering from a Wembley hangover.