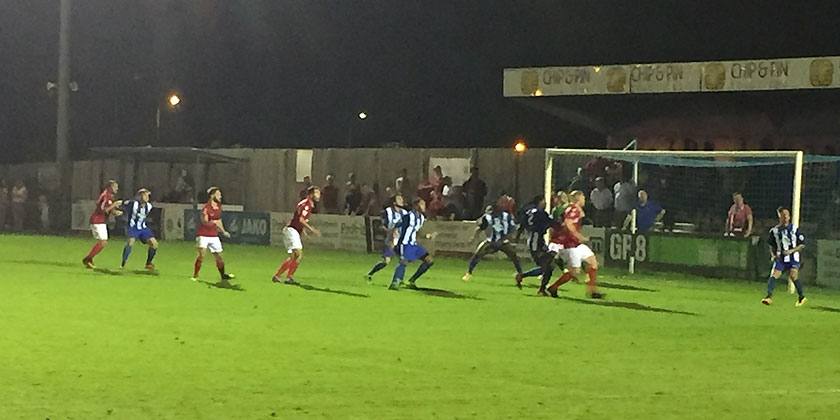 Fleet made it back-to-back wins, seven goals in two games and a clean sheet tonight as they climbed back into the play-off places to seal an excellent week for manager Daryl McMahon.

The boss made only one change, enforced by Dave Winfield’s suspension, and it was something of a surprise with Marvin McCoy deployed on the right of a three-man back line after his recovery from glandular fever.

Stortford may have only scored one goal at home all season but their early movement gave Fleet some trouble before the visitors settled into a recognised pattern. Evans Kouassi was showing pace down the right and inside him former Fleet midfielder Dominic Green and Tambeson Eyong were able to break quickly, keeping Kenny Clark in particular on his toes on the Fleet left.

After just three minutes a cross from the right dropped into the danger area and Dean Rance had to be on hand to sweep clear before Harry Osbourne got to a loose ball before Danny Kedwell and fired a long-range strike over the bar from 30 yards. On eight minutes, another break from wide and another well-positioned cross had the home side appealing for a handball from Sam Smith’s shot before Fleet somewhat hastily managed to clear.

It took 10 minutes for goalkeeper Joe Wright to be tested when a trademark Jack Powell free kick 20 yards out forced him to leap to his left and push the ball away for a corner. The home side continued to play a neat passing game in midfield as Fleet inched their way into the game but once Sam Deering found his feet and Anthony Cook managed to get forward on the right, the visitors started to find some rhythm.

A one-two with Sean Shields on 18 minutes saw Deering clear the crossbar from the middle of the box before the same player surged into the box and had good cause to claim a penalty as he met a Kedwell pass but was felled from behind. Moments later Kedwell also went down under a challenge as he turned to get a foot on a low delivery but again the referee showed no interest.

Fleet’s frustrations weren’t long in being dispelled as on 23 minutes, Cook’s determination saw him force his way past Marvel Ekpiteta to find Deering who in turn steered the ball into a space where Rance was running and he poked it past Wright from an angle 12 yards out to give his side the lead.

With the ball on the ground, some of Fleet’s quick, neat passing was leaving Stortford for dead and another move gave Deering room to nip into the box but his headlong fall was deemed a dive worthy of a caution from the referee.

Powell sent in a free-kick from the left that Wright managed to punch clear as Mark Phillips rose to meet it and Cook fired in a perfect delivery that surged past a host of players and bounced invitingly without a touch on its way across the goal. Chances continued to come Fleet’s way and Deering’s back header released Aaron McLean behind the Stortford defence but the ball landed awkwardly and the Fleet striker could only hook it off target. Another Powell corner was then powerfully headed into the ground and bounced over the crossbar from Clark’s interception.

The home side battled back into it and Josh Ekim sent a curling shot wide of Ashmore’s right post to warn Fleet that they were still very much in the game. However, Fleet should really have gone in 2-0 up two minutes from half-time when another link-up between Deering and Shields saw the latter home in on goal only to send a shot wide with Wright trying to narrow the gap.

Fleet didn’t let up in the second half and from the whistle sought to establish possession again, keeping the home side at bay inside their own half. But there didn’t appear to be much in the way of goalscoring chances until a defensive calamity on 52 minutes gifted Fleet a second. With his back to play, Danny Rumens dawdled on the ball as he attempted to play a short pass to his goalkeeper. The quick-thinking McLean nipped in ahead of him, robbed the ball and picked the gap to Wright’s left to plant the ball squarely into the net for 2-0.

Fleet’s own defensive blunder almost let Stortford back into it at the other end and Ashmore had to race out to block Smith’s run on goal. McLean then saw a shot on goal hit Phillips on the leg before Shields’ cross from the left was pushed on to the top of the crossbar by Wright. Rance wasn’t far off with a header from a Powell corner and then Powell was on hand again to play an exquisite through ball into Deering’s path; he got to the byline, delivered an inviting low cross along the six-yard line but it just evaded his strikers.

McLean took a blow 20 minutes from time that saw him replaced by Darren McQueen – it was nothing too serious but could sideline him for Saturday. By now, Fleet were just eating up time and the game grew a little scrappy as Stortford attempted to salvage something. They had a brief spell in the ascendancy when Ekim’s free-kick forced Ashmore into a lunging save and the Fleet goalkeeper then had to be at full stretch to push Johnny Herd’s long-throw away from the head of Kouassi. McCoy then did well to clear a high delivery at the far post as Eyong snuck in to meet it.

But beyond that brief spell, Stortford struggled to break the back line of Clark-Phillips-McCoy. Having been gifted the second goal, a third was almost presented to the busy McQueen who was inches away from connecting with another poor back pass, this time by Ekim.

But in time added on, McQueen got his reward. Persistence on the right by substitute Stuart Lewis saw Phillips launch a ball forwards. With the Stortford defenders appealing for offside, McQueen collected the ball, kept his cool to go round Wright and stroke the ball home for a convincing 3-0 victory.

Ed Miller has been Ebbsfleet United's communications manager and programme editor since 2014 and responsible for the club website since 2007. Contact him on ed.miller@eufc.co.uk
PrevPreviousFleet plan on prolonging Blues’ home woes
NextMacca enjoys Fleet’s goals spreadNext