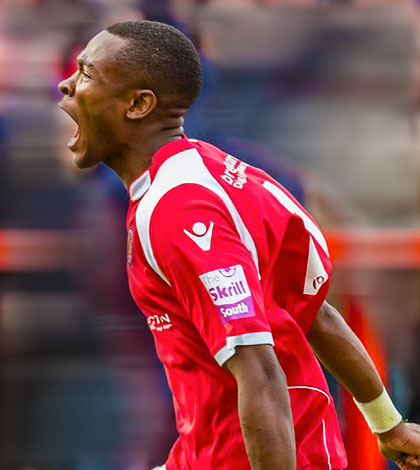 Anthony Cook rescued a point for the Fleet at Bath City as the two sides could not be separated after 180 minutes of football this season. Bath, who drew 1-1 at Stonebridge Road in September, had led twice in a game in which they were on top for long spells, but Fleet’s resilience saw them take home a point from a tricky away fixture.

Steve Brown named an unchanged starting line-up, with only Yado Mambo’s inclusion on the bench ahead of Paul Lorraine worthy of mention in terms of selection. Bath named former Fleet utility man and recent signing Phil Walsh in their starting eleven and after a quiet opening, soon established a foothold in the Fleet half.

David Pratt had first sight of goal on four minutes, heading Jake Reid’s cross over the bar and the two exchanged roles two minutes later after Sekani Simpson’s break saw Pratt’s delivery nodded wide by Reid. Fleet lacked width and their long balls towards the front two were being mopped up by Walsh and his defensive partners.

On 16 minutes, Andy Watkins – the star of the show as far as Bath were concerned – played a neat dummy which allowed Dan Bull to drive a low, powerful shot that was just kept out at the foot of the post by Preston Edwards.

Bath had threatened to unlock the Fleet defence and when they finally did, it was courtesy of a wonderful effort from Watkins on 21 minutes. Twenty yards out, he controlled the ball with one foot and then struck a well-crafted lob over Edwards from the left side of the pitch that sailed over the Fleet goalkeeper to give the home side the advantage.

Watkins was influential throughout the first half and on 28 minutes he supplied another cross into the danger area, which Pratt again headed off target. But two minutes later, with Fleet looking unlikely to craft any opening at all, they were suddenly back on level terms. Alex Osborn took advantage of a Jake Burnell slip to whip across an early delivery and Billy Bricknell was on hand to strike a well-taken shot with his left foot past goalkeeper Jason Mellor.

Back came Bath, and Walsh was at the heart of a couple of decent crossfield balls, one to Pratt that Edwards was forced to save before the Fleet goalkeeper performed further heroics to thwart Watkins. Yet Fleet provided the final threat, Cook’s half-volley clearing Mellor, but also the crossbar, as the visitors suggested they might not be quite so timid in the second half.

Indeed Bath didn’t have it all their own way after the restart, though should have regained the lead when Edwards blocked Watkins’ shot but the Bath man collected the loose ball, got clear of Edwards and rolled it back from the byline towards Reid who somehow missed the target from less than 10 yards.

Ben May made way for Michael Corcoran on 53 minutes as Fleet sought to pack their midfield and the tactic allowed Aiden Palmer and Joe Howe to creep forward a little more adventurously. Bricknell had another chance five minutes after the substitution, again supplied by the quick feet of Osborn, allowing the Fleet’s top scorer to turn Walsh and fire a shot that Mellor, fortunately for him, was well positioned for.

But just as it appeared Fleet might wrestle control of the game from Bath, the home side were back in front. A corner was scrambled across the Fleet box and ran long to Watkins who showed wonderful technique to pick his spot and place a shot into the top corner off the underside of the bar.

Running out of time, Brown sent Michael West into the fray on 72 minutes at the expense of Daryl McMahon and was rewarded with an equaliser five minutes later. Walsh’s foul 10 yards outside the box gave Cook the chance to line up a shot at glory and the winger didn’t disappoint the travelling fans, as he bent his effort around the Bath defenders and into the bottom corner.

He could have broken Bath hearts moments later when he tormented Andy Gallinagh and sprinted inside his man to fire an effort that Mellor took two bites at before holding. West also had a shot saved by Mellor while at the other end Edwards had to be on his toes when Osei Sankofa and Anthony Acheampong found themselves in a muddle from Ball’s cross that deflected into the arms of the grateful Fleet keeper to ensure his side enjoyed a share of the points.

Ed Miller has been Ebbsfleet United's communications manager and programme editor since 2014 and responsible for the club website since 2007. Contact him on ed.miller@eufc.co.uk
PrevPreviousHuke on the home straight
NextLorro forges local linksNext