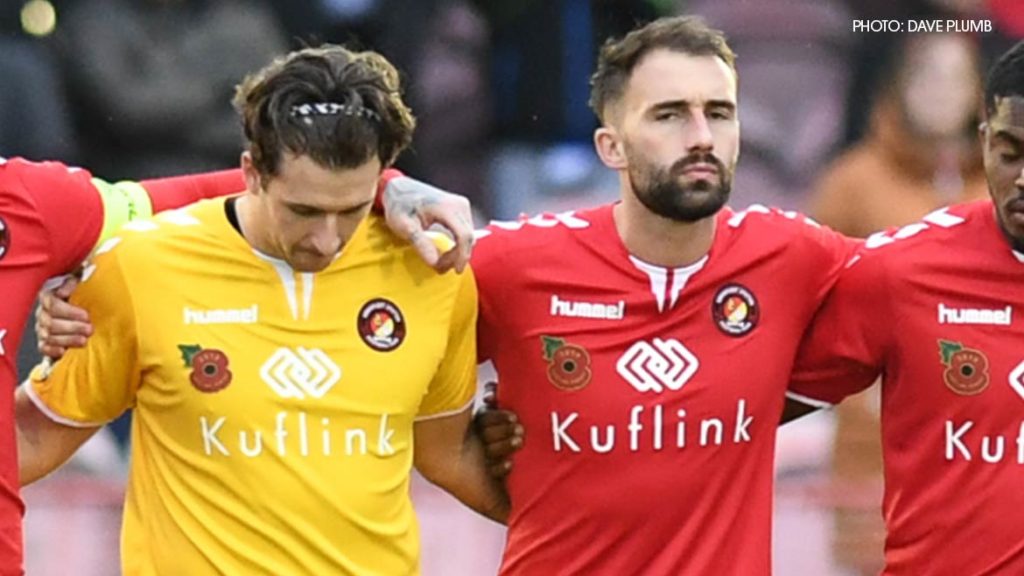 “A hell of a hit!” Holmes gives a keeper’s verdict on Payne opener

Jordan Holmes saved Fleet once in time added on but couldn’t quite do it twice… though at least he wasn’t in the way of the thunderbolt strike by teammate Josh Payne.

Holmes had a view from behind as Payne smashed his seventh-minute opener past the goalkeeper’s opposite number, who was left flat on his back. And the Fleet stopper gave the midfielder extra credit because County’s Sam Slocombe wasn’t even off his line.

“From where I was standing, I saw it come out to him and I thought he’s not going to hit this, he’s just going to calm down and play it out,” Holmes told BBC Radio Kent’s Charles Webster. “But Payney’s got that in this locker, he’s technically unbelievable. He showed that at Sutton and he showed it again. What a strike.

“The goalkeeper wasn’t far out either so you should give Payney more of the credit for the strike. Usually from those distances the goalkeepers are far out and it just goes over him. But this is just a hell of a hit and the goalkeeper, I spoke to him afterwards, he’s seen it and just said to hold your hands up, it’s a great shot.”

There was less praise for the match officials, however, with Holmes adamant the shot which beat him in the first half for the Notts County equaliser hadn’t crossed the line.

“It’s unfortunate the results sometimes haven’t gone our way, even some bits of luck today like with their first goal,” he said. “Did it cross the line? It’s up to the ref to decide that one. My view, it didn’t cross the line. I’m first to hold my hands up if things deserve to go in like their third goal that won them the game. That definitely crossed the line but I’m not sure the first one did and I’m not sure how the ref has called it from the centre of the pitch through so many bodies.

“The ref today, how do I put it, I think he missed a few decisions in the first half for both teams and I think he’s tried to rectify it in the second half. So by giving things that necessarily weren’t a foul, he’s tried to make up for them later in the game. Was our penalty really a penalty or is he just trying to make up for his error that cost us the first goal? I’m not sure.

“But that’s his decision. It was unfortunate through the game, we’ve had a few shots that the goalkeeper saves and it’s hit the post, maybe not gone in, hit the wrong side of the post. But the next few weeks are big for us and hopefully we can push on for more wins.”

Like the majority inside the Kuflink Stadium this afternoon, Holmes felt gutted by the late killer blow, especially having made an excellent save from Kyle Wootton straight after Gozie Ugwu’s penalty conversion.

“Being 2-1 down for a long period of the second-half, to get to 2-2 off the penalty, when they had that chance in the last minute with the cut back, they thought they’ve put it in the bottom corner and I’ve made a good save, I thought here we go, I’ve kept us in it, we have a replay again and into the hat for the second round. But unfortunately they got a good set piece at the end and it cost us.

“I don’t like to watch penalties so I was standing watching the Notts County fans and then obviously they didn’t cheer so I knew we’d scored and it was a great feeling. I thought that was enough for us to get the replay but it wasn’t meant to be. It was frantic to play in and to watch it must have been spectacular for the fans. We’ve really come together as a squad now and we’re playing some good football.”

The bad news for Fleet fans is that Holmes misses the Hartlepool fixture as he’s on international duty with Australia’s U23s and potentially again in January with three games against Iraq, Thailand and Bahrain coming up.

“It’s a massive game against Hartlepool next,” said Holmes, “but unfortunately I’m away on international duty for 10 days so I’ll be back just in time for the Stockport game.

“It’s a fact that when you’re at Bournemouth or a higher-up club you can go on the international breaks but the lower leagues don’t have breaks. Ebbsfleet are well aware that I’m gone for 10 days here and then in January potentially for a month. It’s not ideal for me and the boys, I don’t want to look like I’m jumping ship or don’t want to be in there with them but it’s my international career.”

Ed Miller has been Ebbsfleet United's communications manager and programme editor since 2014 and responsible for the club website since 2007. Contact him on ed.miller@eufc.co.uk
PrevPreviousWatson takes heart amidst disappointment
NextVideo highlights: Notts CountyNext