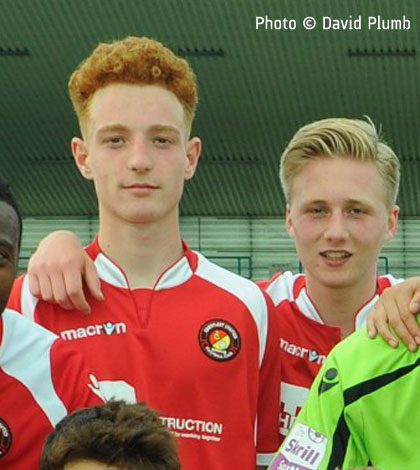 One of the main talking points to emerge from Bank Holiday Monday’s Kent Senior Cup Final victory over Dover Athletic was the emergence of two young talents who were hurriedly drafted into the first-team squad – and then got a taste of the action on the Priestfield turf in front of 1,524 fans.

Jack Barnes (left of picture) and Leo Mazzone (right) were drafted into the squad on Sunday – and their presence called to mind other successful Fleet youth graduates of the past, including Luke Moore, John Akinde and Michael West.

Mazzone, 17, came on in the 67th minute for his future manager, Daryl McMahon, while Barnes (16) followed seven minutes later, replacing Shane Huke. And the Fleet increased the lead with both substitutes on the pitch, sealing a 4-0 win in the final minute.

“The moment I was told I was going to be involved with the first team I was so excited, knowing that all the hard work that I had put in had led me to this moment,” Barnes told FleetOnline. “I really enjoyed the occasion and I’m grateful for the opportunity. I’m really looking forward to working with Macca and the management on improving my game next season and I hope one day to be a regular first-team player. I would also like to thank the players and the management on making me feel welcome.”

Young midfielder Mazzone was only made aware of his big day less than 24 hours before the game. “I got a call from Daryl McMahon on Sunday night at around 9.00pm telling me I was in the squad for the cup final on Monday,” he told FleetOnline. “I didn’t really believe him at first, he told me to get to Stonebridge Road for midday as they were leaving at 12.15.

“The build-up to the game was immense, warming up on such a nice pitch, with players that you regularly watch on a Saturday was an incredible feeling. I remember hearing Steve Brown shouting my name, calling me over for a chat, and it began to sink in that I might play today. The adrenaline was pumping all around my body, I was nervous but excited.

“Making my debut was something I had always dreamed about, and it was in touching distance. Walking out on to that pitch with the stadium announcer saying my name and number, it was a once-in-a-lifetime experience, and I wanted to seize the opportunity firmly, with both hands.

“Once you cross that line, all the nerves disappear and all you want to do is get on the ball, play, and show what you can do. After the game, having won the match, the team and I walked around the pitch clapping the support of the fans. I could see my friends and family in the crowd, it was amazing, and one I hope to emulate again and again.”

Fleet youth coach Steve Watt said, “It was great to see Ebbsfleet youngsters on the bench at the Kent Senior Cup Final today. Leo Mazzone is a very hot prospect who plays in centre midfield and impressed all the coaches at our first trial. Jack Barnes is the current U16 captain who’s just enjoyed a treble-winning season.”

Fleet’s Academy manager Daryl McMahon was also glad to see the project starting to bear fruit already: “I was delighted for Leo Mazzone and Jack Barnes on their first-team debuts,” he said. “Well done to everyone involved in their development.”

Ed Miller has been Ebbsfleet United's communications manager and programme editor since 2014 and responsible for the club website since 2007. Contact him on ed.miller@eufc.co.uk
PrevPreviousNo stadium parking for Saturday’s final
NextClub sponsor bags a hat-trickNext