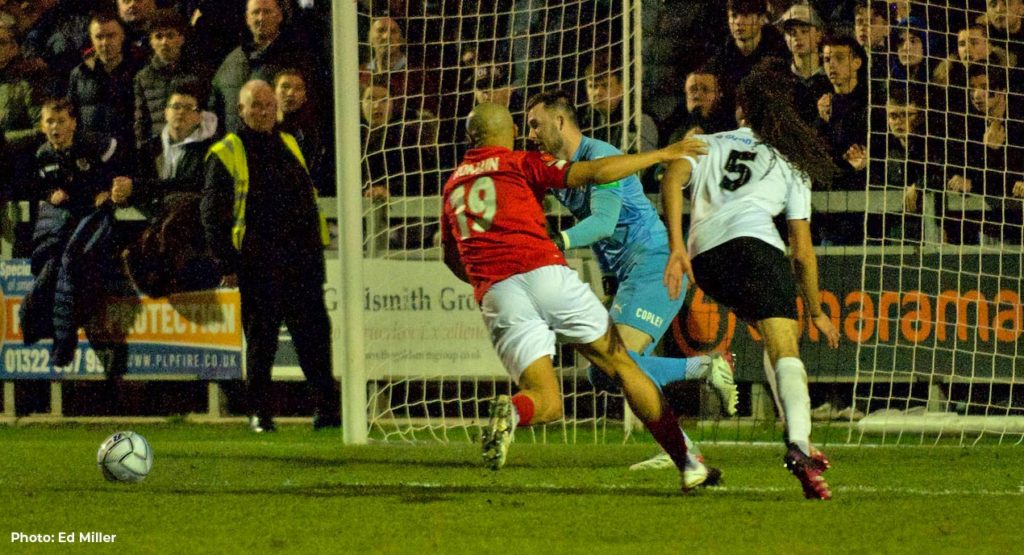 “You can’t be so wasteful with chances,” says Fleet boss

Clear-cut chances not put away were where the Fleet lost the game last night said Dennis Kutrieb, who admitted the loss of Rakish Bingham was an area he was looking to address.

“We miss him definitely,” the Fleet boss told BBC Radio Kent’s Charles Webster. “We had at least five clear-cut chances where you need to score. Even with a draw I would say I’m not happy about it. We wanted to win the game, we had enough chances to but if you don’t put the ball in the back of the net and you’re so wasteful with chances, you can’t win, simple as that.

“If we didn’t create the chances it would be a concern but we have the chances so at the moment it is no concern. But of course you can see without Raks, it’s a different story up top and we need to find [solutions] and fill the gaps. And that’s what we’ll do. We will do our work there and we will find solutions and go on from there. But it’s not about one player, it’s not about one chance, it’s about the performance. I saw some outstanding performances today – Christian N’Guessan, Chapman, Tobi in the second half, Chris Solly again over 90 minutes but of course we need to have 10 or 11 have such a game. If you don’t have everyone with the high quality on the pitch then it’s tough to win.”

Going down to 10 men late in the game after all three substitutions were made hampered Fleet’s chances to mount a late rally but Kutrieb felt his side were still the better of the two despite the disadvantage.

“It’s exactly the same as I said on Saturday, we don’t have the rub of the green at the moment. I could see it and I could feel it the same for today,” he said. “Of course you need to win the game easily but even with 10 men in the last 15 minutes there was an injury, we dominated the opponent but it doesn’t matter, you need to put the ball in the back of the net and that’s where we suffer at the moment

“I saw one other chance [for Dartford] straight away after the goal to make it 2-0 with Robinson again but that was the only other chance. And even the first chance, I will look at it back on the video, [it was] a foul I think – you have a referee who gives every little thing like a foul and then he didn’t there but it’s gone, it doesn’t matter.

“The response was really good and as I said, if you have so many chances you need to score. If you don’t, you lose, and congratulations to Dartford because they didn’t concede and so they they are the deserved winner. Now we play on Tuesday again so for me it doesn’t matter if it’s Saturday or Tuesday, we don’t need to wait too long. We can’t lose our heads now, we need to make the right decisions, we need to find the right solutions. If it would be a draw, everyone would say it was a great game from us and all these things but we lost 1-0 and unfortunately the only thing what matters in football is to win games.”

Joe Martin’s injury late on saw him limp off but it was too early to assess how long he might be out for.

“I don’t know at the moment,” said Kutrieb. “He said to me he thought he got a cramp but he was out injured a little bit longer so of course playing now two games in three days, it’s always tough and that’s the reason why we need to rotate sometimes. Maybe we got it wrong and we should have rested Joe Martin but he is experienced enough to tell us how he feels, he said he’s ready to go but it can happen. It’s a long season and it’s a a tough pitch and when you need to overlap, underlap and push forward – especially when you’re 1-0 down – it’s sometimes tough. Unfortunately it was three minutes after we made our last substitution so we needed to go with 10 men but that’s exactly what I mean when I talk about the rub of the green but it is what it is, we have to take it.”

One player definitely in contention for Tuesday night is goalkeeper Louie Moulden and Kutrieb was pleased to land that first new recruit.

“He is highly rated and what we saw is really good,” said the manager. “I’m proud for us as a club that we got the deal because I think it’s not easy for a National League South side to get such high quality. He’s young, maybe he will make some mistakes, we don’t know at the moment but I wouldn’t be surprised if we see him one day in the highest leagues. We don’t take it for granted that we can get a player from a Premier League club and it’s always tough in this league to get good loan players because of course they want to pick a League One or Two team. He trains with us from tomorrow and then we’ll see.”

Ed Miller has been Ebbsfleet United's communications manager and programme editor since 2014 and responsible for the club website since 2007. Contact him on ed.miller@eufc.co.uk
PrevPreviousDartford 1-0 Fleet
NextKresh crosses over to Billericay on loanNext