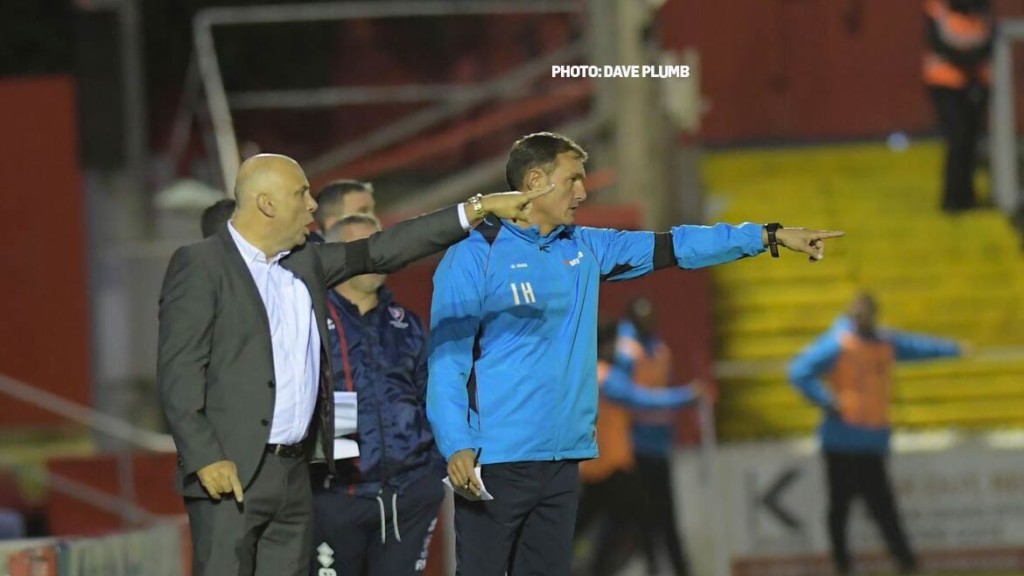 Work rate, commitment and effort are there, says Hill

First and foremost, Garry Hill demanded hard work and endeavour and he got it in spades as Fleet earned a draw in the manager’s first game in charge.

And in his first post-match interview, with BBC Radio Kent’s Charles Webster, the new boss saw plenty to encourage him ahead of away visits to Boreham Wood and the replay at Cheltenham.

“A lot of positive as you can appreciate, a lot’s gone on over the last 48 hours,” Hill said. “[We] only had a couple of days on the training pitch with the players. Ideal game to have being the FA Cup and playing against a league side. The number one factor you ask for is work rate and commitment for the 90 minutes, whatever you do or whoever you play against, you’ve got to have 90 minutes and people working.

“I’ve got no complaints in respect of the work rate and the commitment and the effort. Of course, I read certain things… I heard last week they got a result here at home against Barrow but the performance was poor by the standards that should usually be set.”

Like most observers at the Kuflink Stadium, Hill was in agreement that his side had the upper hand and should probably have gone in with their noses in front against a Cheltenham side that took 45 minutes to grow into the game.

“You always have this several times over the years in the FA Cup ,” he said. “League sides are a little bit cautious, they tend to be a little bit nervous. They want to feel their way into it, they hope to ride a little but of luck, hope to get the breaks. I think they really got that, certainly in the first half that we had opportunities. If we’d been one or two up at half-time I don’t think they could have complained. We had the better of the chances over the 90 minutes.

“I take a great deal out of the first half. I thought we were the better side by a long way. I thought that we lacked that little bit of quality in the final third and I think we got round the back of them several times, certainly on the right-hand side. Myles Weston was causing them a lot of problems. And even on the left, Coulson and Corey Whitely got round the back. There were some positives there and it didn’t quite go for us. The start of the second half, being fair to them, they got in the game , there was a little 15/20-minute spell where they grew a little bit in confidence and started to dictate a lot of the possession but not really cause us too many problems.”

Hill made a switch on the hour mark to stem the Cheltenham flow in midfield and it was something of a new addition for the Fleet, with Jack King deployed in midfield for his first appearance since the league game at Wrexham. King, who has played in a similar position throughout his career, helped turn the tide back the home side’s way.

“They were starting to get a certain amount of belief,” Hill said. “I could see us giving the midfield advantage away. We made one or two changes and Jack King came in there to bolster it up with Payney. All of a sudden then we started to get back on top. You wait and hope with whatever there is to go that you get a chance which could be a winner. We had that great chance, there’s no doubt about that, the ball got knocked  back, Kenny was disappointed but it’s a chance that should have been taken and you win the game but then you look at the other end of the pitch and your back-line boys have kept a clean sheet. So there’s still a lot to play for. I’ll take the positives in 48 hours, playing against a league side, we kept a clean sheet.

“And by the appreciation of the supporters at the end, I think the team performance and work rate was in an area and to a standard with something to build on.”

Ed Miller has been Ebbsfleet United's communications manager and programme editor since 2014 and responsible for the club website since 2007. Contact him on ed.miller@eufc.co.uk
PrevPreviousFleet 0-0 Cheltenham Town
NextAccy awaitsNext