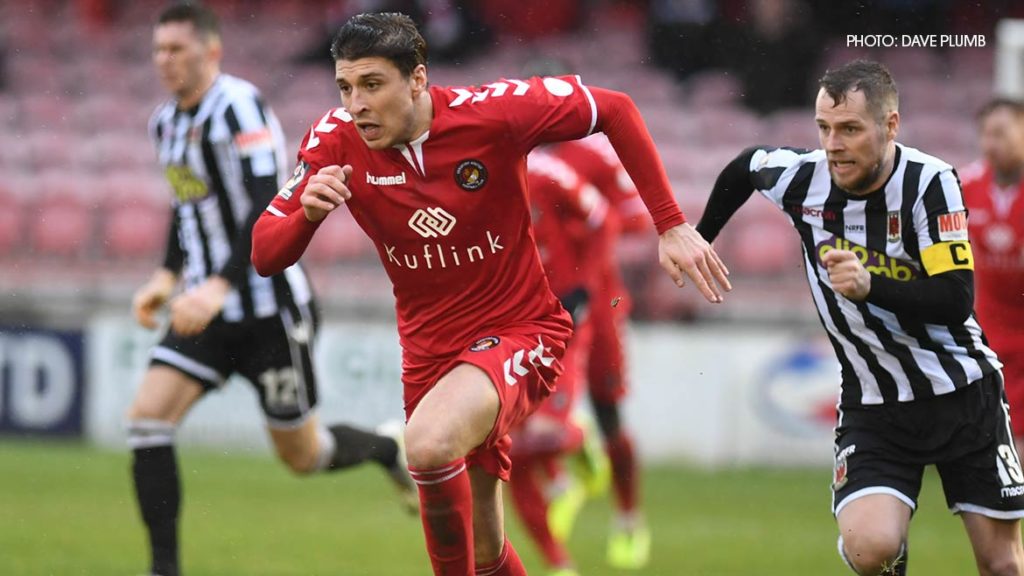 “Winning is everything” says mercurial Mekki

Adam Mekki slotted into his wide left berth at Maidenhead last night and promptly provided the energy and drive – not to mention a pair of assists – that saw Fleet score three goals for the first time since October.

And the Bromley loanee insisted sticking together is the only way his side are going to climb out of their predicament.

“It’s all about character and sticking together, not looking too far ahead,” he told BBC Radio Kent’s Charles Webster. “Keep the games coming and keep the three points coming, that’s it.

“We look at the table, we’ve had too many draws, too many losses, either one of them is not good enough to stay in this league. We’ve left ourselves in a situation where winning is everything.

The business was certainly done at York Road last night, despite going a goal behind but Mekki insisted his side’s strength of character stopped them folding there and then.

“We knew we just had to come out here because a draw or a loss was not acceptable,” he said. “It was tough going 1-0 down and we felt it was a foul on Greggers but we stayed strong and we knew the way we were going to play. We stuck together and it was great to see the two front boys getting some goals because that’s what it’s all about.

“We went with the same formation but more attacking. Playing in that position and in that formation we did allowed me and Glash on the other side to have licence to get forward. We were technically in a wing-back position so it’s half-defence, half going forward, but it was good as we had the three boys behind us keeping it solid, allowing me and Glash to get forward, get us up the pitch. It was definitely something we worked on in training and was just good to see three goals and to win the game.”

After Saturday’s 4-0 reverse at Chesterfield, the Fleet squad knew the emphasis had switched to Maidenhead and while the management staff have been keen to avoid putting all the pressure on individual games, Mekki knew how big this midweek clash was.

“We had the pressure on Saturday against Chesterfield and it was a cagey game. After about 65/70 minutes we looked like we were in it and we really took the fight to them. But obviously to lose 4-0 in 25 minutes was really disheartening.

“So we knew today the pressure was on, we need to perform, we need to get a result and we said before the game that potentially Maidenhead are a team we can start dragging into it. If we get three points on them now, the gap shuts. Chesterfield have got enough firepower to probably stay up and I think they’re one of the form teams. So Saturday we had to draw a line under and knew today was just as big, if not bigger.”

Despite Fleet’s lowly position, a Kevin Watson side hasn’t lost two games in succession and if the players can add a run of wins to that stat, Mekki believes they give themselves every chance for salvation this season.

“The manager’s emphasised how vital three points is,” he said. “He made a comment in there that since he’s been in charge we haven’t lost two games in a row.

“We’ve left ourselves in a situation where every game’s massive regardless. Sometimes it doesn’t even matter who you’re playing against or what team, you should know three points is minimum.

“Every game’s different, every team we play is different. You’ve just got to take each game as it comes, adapt to formation and different teams we play home and away. But ultimately we need to go out to win every game, thinking we’ve got to win this regardless.

“Until we’ve got the ‘R’ next to our name, we’re not taking anything for granted. We’ve still got to hope, we’re going out to win every game, not sitting off now.”

Ed Miller has been Ebbsfleet United's communications manager and programme editor since 2014 and responsible for the club website since 2007. Contact him on ed.miller@eufc.co.uk
PrevPreviousGameplan carried out “to the letter”
NextThe final five: save on admission to remaining home gamesNext