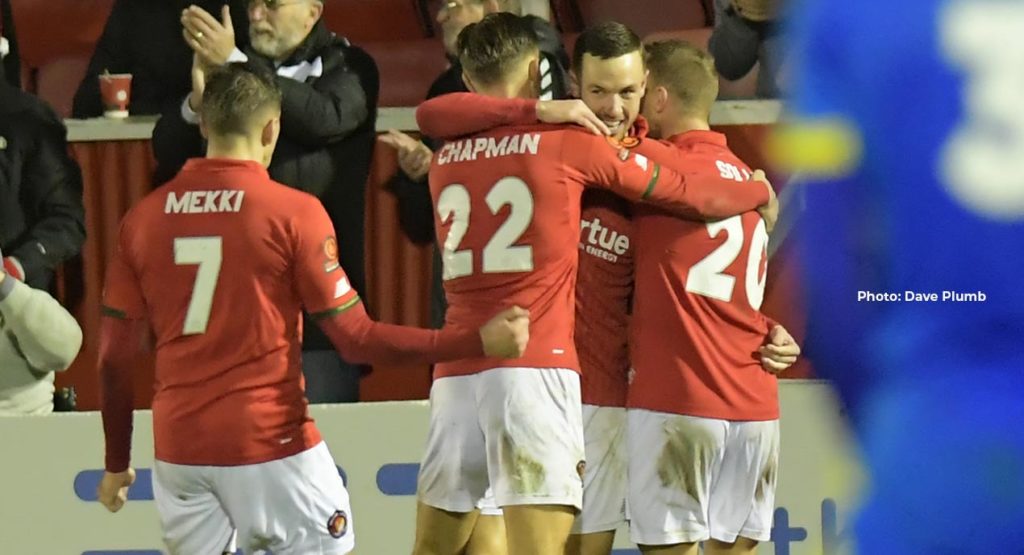 “Winning and nothing else”

The Concord game was always about the result and the points, said Dennis Kutrieb after his side filled the brief exactly in terms of those results and points. Just as the Fleet boss had said that despite being unlucky at places like Oxford it was all about the result, so too was the case here, with the late goal producing the all-important win that keep Fleet just one win off the top of the table.

“What we said before the game is it’s not about playing the greatest game and the nicest passes and everything else,” he told BBC Radio Kent’s Charles Webster. “Today is about winning and nothing else. Of course we wanted to make sure that we didn’t concede – unfortunately we conceded one. We only needed to make sure we don’t concede easy goals [and that] was much better today than last week.

“It’s not easy to get a win against Concord – Dartford lost, Dorking struggled against them, so we knew that it was going to be a tough game for us, especially in the situation where we are. So big credits to the boys because they put a big shift in, there were long periods in the middle of the game where it seemed as though it was difficult to work out how to break [Concord] down and they were pretty resolute in what they were doing.”

Breaking teams down is always a frustrating experience, as Kutrieb alluded to in his post-match thoughts.

“The problem was not so much to work out where we can break them, it was more the situation to not lose your head because if you’re not one, two or three goals up, it’s always going to be a tight game. You need to make sure you’re able to wait for the right moment to score and you could see during the second-half more and more from minute to minute we came closer and then finally we scored our goal. I think it’s well deserved, especially because of the second-half. The first-half was okay as well – if we [hadn’t] conceded in the first-half, I would say it was a great defending game because I couldn’t see [another] great chance from the opponent.”

Christian N’Guessan started his first game since his injury at Chelmsford and the Fleet manager praised the midfielder’s performance, despite an early caution.

“He had so many good decisions today,” said Kutrieb. “Even when you’re booked after two or three minutes, to play such a good game and do almost every decision the right way, to be calm and make the right passes and easy balls, not over-complicating things on the pitch, he was there as well. He’s a big player for us and we subbed him off because we don’t want to rush him. We don’t want to force anyone to come in the team and to straight away get injured. That was the gameplan, to sub him off after 60 minutes.”

Home fans rose out of their seats in premature celebration and then indignation when Dominic Poleon’s ‘goal’ was flagged offside and the Fleet boss was as mystified as many in the stadium.

“I don’t know how he can raise the flag after 10 seconds. I said to Dom, [it was perhaps] a mistake to [look at] the linesman if it’s offside or not. It gives him a [reason] to raise the flag perhaps because he was not sure. But after we scored, we started our celebration and then he raises the flag because he’s got an idea [it’s offisde]. But we get nothing gifted, not from opponents, not from referees, from no-one. So we just need to work hard and stay tight together as a team and then we will get our right results.”

As well as the result, the character and application were vital in Saturday’s outcome, said the boss.

“The main point for me is the boys have the right character and that’s what I say when we get our defeats. Sometimes you have a spell where you’re a little bit unlucky, like Oxford for example. But you have to overcome it. I don’t want to say that it’s done now – and now we start winning again. But it was the first step in the right direction. It was not our best game but we managed to come through it and get three points and in this moment, that’s the most important thing.

“I never judge the team because of results but you need to make sure that you get the right ones. Today you could see that not everyone was on track [but they were] really digging deep and working hard and I was really happy from this point of view. When we talk about the football we saw during the period when we had our wins, it was definitely better than today. But Mekki was out for many weeks, Woody was out for many weeks and it takes time. Greg Cundle had so much confidence, he comes back after a small injury and straightaway he gives us a big impact. He’s on fire, he’s prepared, he’s always a threat. On the other side, we lacked a little bit of the same quality but we are a big squad and we have enough players and everyone needs to step up. Today was Greg Cundle, next week it’s probably another person.”

Ed Miller has been Ebbsfleet United's communications manager and programme editor since 2014 and responsible for the club website since 2007. Contact him on ed.miller@eufc.co.uk
PrevPreviousFleet 2-1 Concord Rangers
Next“Missed chance spurred me on”Next