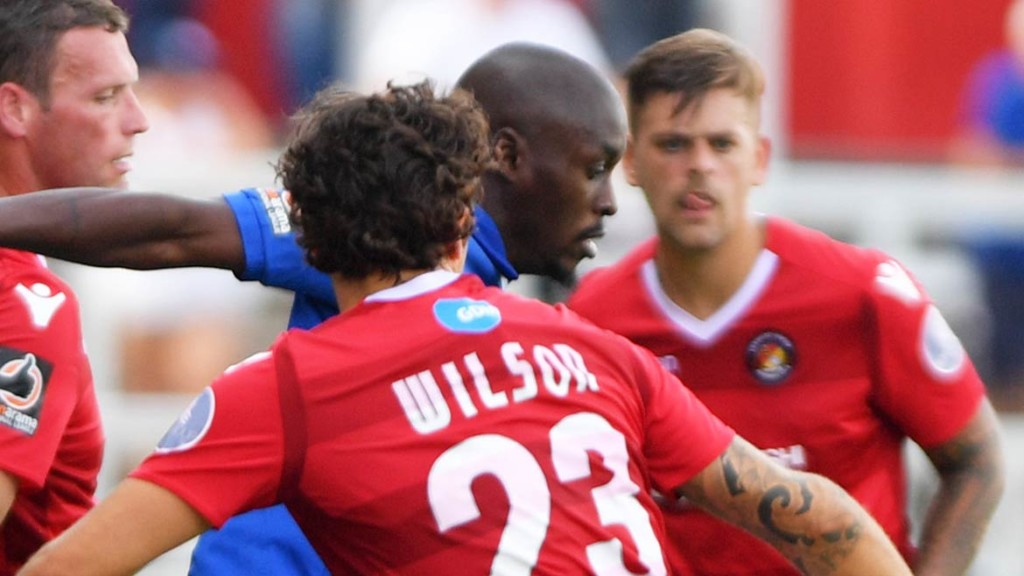 Wilson back to enjoying his football

Lawrie Wilson has enjoyed being part of Fleet’s unbeaten league run of late, having played in seven games since his return from loan at Maidstone, and he says the unbroken run is having a positive effect.

“I’m definitely enjoying my football,” he told BBC Radio Kent’s Charles Webster. “I don’t think any footballer who isn’t playing is ever going to enjoy their football so for the gaffer to come in and have that trust in me, I have to repay that and that’s what I’m doing. For whatever reason, I had many chats [with Daryl McMahon] to ask why but he preferred Sam Magri instead of me so that’s something as a player you have to just get on with. But to be given this chance now, I don’t want to let that slip and that’s hopefully showing in the performances I’m giving.”

Saturday’s Trophy exit aside, results have been positive for the Fleet recently and Wilson believes a more tight-knit squad has much to do with that.

“The management staff have come in and really set their stall out and said this is the way we want to play,” he said. “It seems like everyone has jumped on board and we have a little more direction. Everyone’s on the same page out there on the field. Throughout my career, I’ve learned managers trust players and the ones they trust are the ones that play each week. As a manager you can’t be putting a player in without trusting them and I think the gaffer here has got 17, 18 players that he trusts and that’s shown on the pitch and being repaid on the pitch with the wins, apart from obviously unfortunately today.”

After playing four games at Maidstone, the former promotion winner with the likes of Stevenage and Bolton Wanderers says he was never in any doubt that he had an immediate future back at the Fleet.

“The length of contract I still have, I always knew I was going to be coming back,” he said. “For me, I’ve always had to prove managers wrong so it was just go out, play some games, come back and be a certain standard. Sometimes when you go away from a club and come back, managers have a change of thought, they appreciate you a little bit more or they see something different in you. Before I was just training hard but never really getting a chance.

“I said stick with me, give me a chance, it might take me two or three games, but as a player you want to be given opportunities and chances. I understand if you’re not playing well, you should come out of the team. If you’re in and out one game at a time and you’ve not played for two or three months, then you play one game, to be able to switch it on doesn’t usually happen at this level. So I feel like now I’ve been given a run of games which is why I feel a lot more confident. That’s probably the reason why I went to Maidstone on loan because I just wanted to have a run of games and get back to enjoying my football.”

Enjoyment of football might have seemed at odds to outsiders looking in on Fleet’s recent off-field restructuring but Wilson said players just kept their heads down and tried to do their talking on the pitch.

“I’ve had it before with Bolton,” he said. “As a professional, we have to get on with the job. With all the stuff that goes on outside, it’s out of your control. All you can deal with is playing each game as it comes and giving your all in those games. You hope the management staff are dealing with those issues. As a player I can’t deal with payments. All I know is to be out there and win football matches. The squad do sit down and we may have meetings together, we all try and get on the same page as there is nothing you can do outside of playing.”

Now that Fleet are out of knockout competitions bar the Kent Senior Cup, Wilson believes the old adage of ‘concentrating on the league’ will be much better estimated after the Christmas run of games.

“Very disappointed with losing [in the FA Trophy],” he said, “but the manner of the loss is probably a positive to take from it. If you watch the game, it was a positive performance and we created a lot of chances.

“We’ve been on this great run, the two games we’ve lost have been in the cup, and if you’re going to lose, you’re better off than losing in the league. The run that’s happened, we haven’t been going ‘play-offs this, play-offs that’. We just keep winning and then suddenly you are only five, six points away from it so for us it’s about churning out results and come the end of Christmas you suddenly know where you are. It’s the same as last year. We were just off it and then suddenly you go, we can do this. Nobody wants their season to just dwindle away, it’s always something to look forward to.”

Ed Miller has been Ebbsfleet United's communications manager and programme editor since 2014 and responsible for the club website since 2007. Contact him on ed.miller@eufc.co.uk
PrevPrevious“It just didn’t go our way” says boss
NextBuy advance tickets for AFC Fylde gameNext