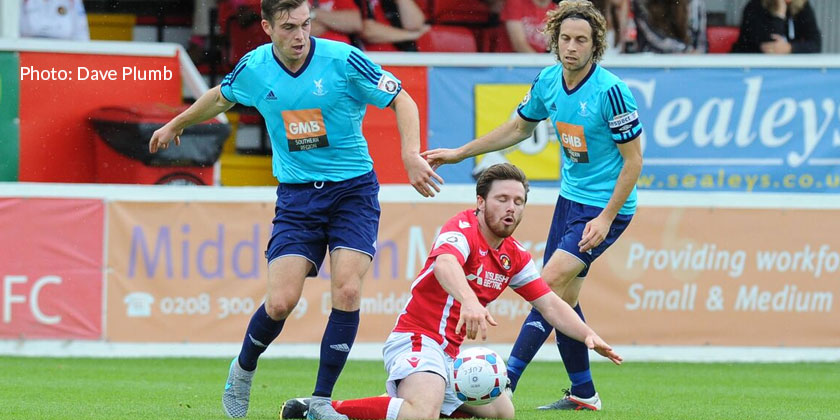 Hawks on the horizon

Forget the last 42 games – Fleet’s season rests on the next two or three, starting at Whitehawk’s Enclosed Ground. And things couldn’t be much tighter between the sides in head-to-head encounters in recent seasons. During the last campaign we won one each and this season saw a pulsating 2-2 draw at Stonebridge Road and a hard-fought but impressive 1-0 win in Brighton for the Fleet.

Fleet fans have more than enjoyed their two previous first-leg ties, navigating both with relative ease – a 4-1 win at Chelmsford in 2011 and a 4-0 thrashing of Bromley in 2014. Such breathing space would be nice but hardly expected against a Whitehawk side second only to champions Sutton United in the form table.

That said, Fleet’s own form in recent weeks – the Sutton match aside – has hardly been poor. Daryl McMahon’s side have blasted 20 goals in seven games, Matt Godden having scored exactly half of those. It may not quite top Whitehawk’s form going into this pair of games, but it’s momentum nonetheless and Fleet are finding goals easier to come by of late.

McMahon has an embarrassment of riches to call upon up front with Godden and Danny Kedwell at the head of the queue for starting berths, but with Charlie Sheringham and Aaron McLean poised to play some part. Sean Shields was rested on Saturday while Sam Deering’s showing across 90 minutes must surely push him into the manager’s plans as well while Anthony Cook is also hoping to be fit after being substituted midway through the second half of the Eastbourne game. Matt Fish and Kenny Clark are also looking to shake off minor knocks while Dean Rance returns from suspension.

It all adds up to something of a selection headache for the Fleet manager who had Whitehawk watched last Saturday but is aware that at this stage of the season both sides will know plenty about each other as it is. Fleet have considerable play-off experience in their ranks at both Football League and non-league level, with ex-Hawks Deering and John Paul Kissock having contested a promotion final only last season for the opposition.

The spine of Whitehawk’s squad is much the same as that which lost out to Boreham Wood in last year’s final and the Hawks will rely on that experience to see them through. Since we last met at Christmas, there have been numerous changes with manager Steve King being replaced by Pablo Asensio who has former Fleet goalkeeping favourite Lance Cronin as his assistant.

Sam Rents has come in to the defence from Margate, along with former Staines centre back Chris M’Boungou and New Zealander Liam Graham on loan from Chesterfield. And anyone hoping there might be gaps in Whitehawk’s squad with the return of Michael West and Alex Osborn to the Fleet can discount that with skipper and midfield playmaker Sergio Torres ready to return, along with former Brighton striker Jake Robinson. The Hawks could also call on former Fleet midfielder Tommy Fraser who returned to the Enclosed Ground earlier this year.

Then, of course, there’s the man just behind Matt Godden in the league’s scoring charts, Danny Mills. He will keep the Fleet back line as busy as Godden will hopefully at the other end. Godden will be up against Jordan Rose, whose return to the Hawks squad has helped plug a previously leaky defence that has conceded 62 goals this season, only seven fewer than bottom club Basingstoke. But in their last 10 games, Whitehawk have only let in seven, two less than the Fleet, so Rose’s return has clearly coincided with their rise up the league.

There will be intriguing battles across the park – Bonner v Mills, Lewis v Torres and Godden v Rose to name but a few; three coachloads of Fleet fans and plenty more via rail and road will aim to help their men win this first of two contests ahead of the return on Sunday.

*The first leg will be segregated on the orders of Sussex Police. Fleet fans are allocated the northern (uncovered) end of the ground known as the Sea End. Refreshment outlets will be provided but visiting fans are not permitted to use the club bar. Parking is minimal and Whitehawk FC have advised early attendance to get a parking space on a first come, first served basis. Limited additional parking will also be available at East Brighton Park.

Ed Miller has been Ebbsfleet United's communications manager and programme editor since 2014 and responsible for the club website since 2007. Contact him on ed.miller@eufc.co.uk
PrevPreviousSeats available on third Whitehawk coach
NextWhitehawk 1-2 FleetNext