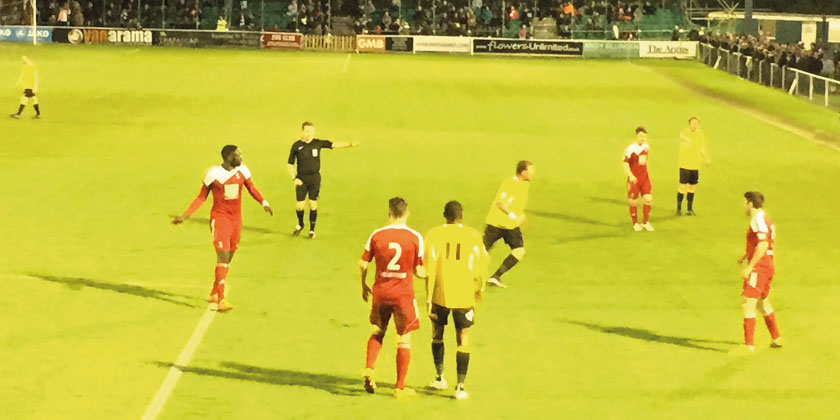 Fleet got their noses in front in the tie and maintained their 100% first-leg record in play-offs as they edged Whitehawk in a game that was a great advert for the National League South. The home side came on strong in the first half but Fleet dug in and produced a fine second-half display to extend their lead from the first 45.

Daryl McMahon maintained his full-back setup from the Eastbourne game, with Matt Fish injured and Bryan van den Bogaert still unavailable so Joe Howe and Dean Pooley kept their places. Kenny Clark got the nod ahead of skipper Tom Bonner and Dean Rance was back in place of Jordan Parkes.

Fleet had to weather an early Whitehawk spell of pressure, with Dave Martin winning a highly dubious free-kick down the left flank after five minutes and the same player headed the set piece just over the bar as it was floated to the far post where the Whitehawk winger had plenty of space.

The visitors looked a little nervy at the back at times and with Whitehawk playing a very high defensive line, the Fleet just couldn’t ease the pressure and supply Matt Godden with much more than scraps early on. It took 15 minutes for the yellow shirts to mount an attack on Craig Ross’ goal but stand-in skipper Danny Kedwell’s shot was well off target.

But Fleet started to see a little more of the ball in their opponent’s half from the 25-minute mark and had a great opportunity when Kedwell and Godden played a clever one-two, Godden squeezing through the central defenders to pull a shot just wide.

That miss was forgotten two minutes later as Fleet outwitted the Hawks with some great football. Sam Deering, roundly booed by his former fans, won the ball in midfield and worked a pass into Rance. His first-time ball unleashed Kedwell who turned a fine cross into the middle where the unlikely form of Stuart Lewis was well-placed to sweep the ball home.

The goal gave Fleet the confidence they needed to push forward and stem the Hawks’ earlier midfield drive and Lewis was almost in for a second when Godden cut inside and delivered a low pass. Whitehawk were still finding plenty of width, their two men on either flank – Nick Arnold and Martin – keeping the visiting full-backs busy until half-time. Deering and Lewis gave their defenders plenty of protection, however, with the former Hawks midfielder in particular performing several vital challenges on the edge of the box, while Nathan Ashmore’s command of his area and one confident punch almost to the halfway line typified Fleet’s commitment.

If the Hawks had perhaps edged the first-half, Fleet picked up the initiative straight away in the second. It was a really gutsy, battling performance, however, with Whitehawk by no means rolling over and the two teams produced an open, flowing second half.

Fleet had the better chances and seven minutes in, Anthony Cook’s trickery took him in between two defenders with only the goalkeeper to beat but his shot was down the middle and Ross got a hand to it. Two minutes later Godden broke free down the left and cut inside to again produce a one-on-one with Ross but the pace of the ball carried it too far and it bobbled into the goalkeeper’s hands. There were two penalty shouts at either end when Jake Robinson went down under an Anthony Acheampong challenge and then Kedwell was pulled back inside the box as he shaped to shoot, but neither seemed clear-cut calls.

Fleet continued to press and get round the Hawks’ back line, in much the same way as they did in the game here back in December. Deering hooked a ball into Godden’s path but the Fleet’s top scorer’s first-time effort flew high. Godden was constantly frustrated by the offside flag, however, while at the other end Arnold whipped a shot just wide after Rance slipped while Clark had to hack clear as another shot hit the post with Ashmore out of position.

But Fleet looked to have sewn the first-leg up on 74 minutes. Cook’s running was stretching Whitehawk’s full backs and he won a free-kick 15 yards out. Kedwell shaped up for his trademark thunderbolt and he was finally rewarded with a goal, his drive slamming through the Hawks’ wall and proving unstoppable even though Ross might have got a hand to it.

The two-goal lead gave the fans great cheer in the open-end seats but things became a little nervous eight minutes later when Whitehawk grabbed a lifeline. Torres, who lurked along the 20-yard line all night looking for an opening to exploit, finally found one and his shot was very well parried by Ashmore but it dropped into space that Danny Mills was on to in a flash and he swept the ball home to the delight of the Hawks fans behind that goal.

It woke the home side up and for the first time in the second half, Fleet looked vulnerable. Arnold had space down the right to wrong-foot the Fleet defence and play in Jake Robinson to hook a shot just wide as the Hawks’ fluid movement carved an opening.

Again, however, Fleet dug in and weathered the storm and really should have been 3-1 up as the game entered stoppage time. Kedwell broke free down the right and delivered an excellent low cross for substitute Charlie Sheringham. He homed in on goal but delayed a shot, instead attempting to take it round Ross and the goalkeeper was able to smother the ball.

Five minutes of time added on caused a little anxiety behind the goal but Fleet were resolute and deservedly took home a slender but perhaps vital one-goal lead. It’s back to Stonebridge Road on Sunday for what should be a real hundinger!

Ed Miller has been Ebbsfleet United's communications manager and programme editor since 2014 and responsible for the club website since 2007. Contact him on ed.miller@eufc.co.uk
PrevPreviousHawks on the horizon
NextLewis hails intensity and togethernessNext