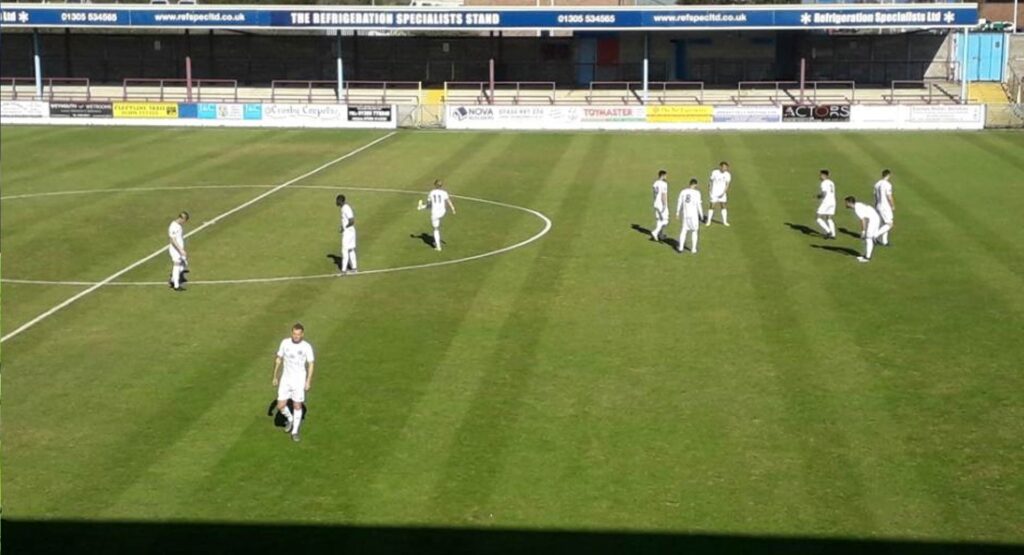 The Fleet continued their recent roll as they returned from pre-season’s final test with a richly deserved win under their belts.

Josh Payne’s second-half penalty was enough to separate the sides, although another couple of goals on to the final 1-0 result would not have gone undeserved as the visitors established the upper hand, especially after the break.

Dennis Kutrieb rotated his goalkeepers once more as Tom Hadler took over from Jordan Holmes while Michael West was in for Adam Mekki.

Under bright, clear but cold skies in Dorset, Fleet took to the field in all white, wearing their New Balance away shirts for the first time.

Weymouth were the first to get forward in a tentative start, Jake McCarthy almost taking advantage of an errant pass in the Fleet defence on three minutes but Hadler gathered that.

Fleet enjoyed plenty of possession and utilised either flank to good effect with a quick, easy-on-the-eye passing game, but found the Weymouth back line a well-drilled unit.

The home side began to establish themselves from the quarter-hour mark and the nearest either side came to a goal early on was in the 17th minute. Weymouth’s Tom Whelan got in behind from the right side of the box and his shot was diverted into the side netting by Hadler.

Fleet responded when a precise long ball forward released Rakish Bingham and he and Lee Martin looked lively in attacking the Terras rearguard but they were outnumbered by defenders.

Hadler did well to get hands on a sweeping shot from 30 yards by the influential McCarthy on 28 minutes, his defence mopping up the loose ball in the process.

Martin and Bingham combined again on half an hour, a quick-passing approach picking out the Fleet skipper and his ball along the edge of the box just evaded the outstretched leg of his strike partner.

Bingham certainly did connect on his next delivery from Martin five minutes later, striking the woodwork with a shot that beat the goalkeeper and moments later almost slipping clear to get another effort on target.

It became an increasingly busy spell for the goalkeepers with Hadler then immediately having to get down to another fierce drive from McCarthy. He punched clear the resulting corner and then had to rise to gather a well-flighted cross from the other side.

More exceptional movement from Fleet on the counterattack late in the first half saw West speed forward to involve Bingham and Martin once more but Martin couldn’t quite get the connection he needed.

Fleet began the second half with a flourish and had a couple of sights of goal inside the box in the opening minutes.

And the visitors were rewarded 10 minutes in when a clumsy challenge on Martin as he shaped to shoot earned the Fleet a penalty. Payne took a short run and blasted his spot kick high into the top corner for 1-0.

It could have been 2-0 two minutes later when a counterattack released Bingham and he slid a shot along the box and just past the foot of the far post.

Another counterattack on 61 minutes saw Weymouth mess up an over-elaborate corner, Jack Paxman racing upfield to release Bobby-Joe Taylor and his cross as he cut into the box was hurriedly hacked away by the home side.

Fleet’s well-oiled machine had certainly stepped into top gear and could have profited further via a number of additional breaks upfield.

On 73 minutes, a well-worked move down the right released the energetic Bingham in behind the Weymouth defence and his cross flew across the box but was just too far ahead of an incoming white shirt.

The very next attack produced another shot whipped low just past the Weymouth post as the National League side began to look increasingly unsteady.

But they weren’t quite finished and Fleet had to defend stoutly as Trialist took charge to head clear a dangerous ball into the box before Cody Cooke headed inches over the bar.

But the visitors re-established control quickly and with a flurry of substitutions in the final 10 minutes, held on to their 1-0 lead without issue to go into next week’s Emirates FA Cup tie in confident and convincing form.

Ed Miller has been Ebbsfleet United's communications manager and programme editor since 2014 and responsible for the club website since 2007. Contact him on ed.miller@eufc.co.uk
PrevPreviousFleet bank on best bottles
NextAre you flagging for the Fleet?Next