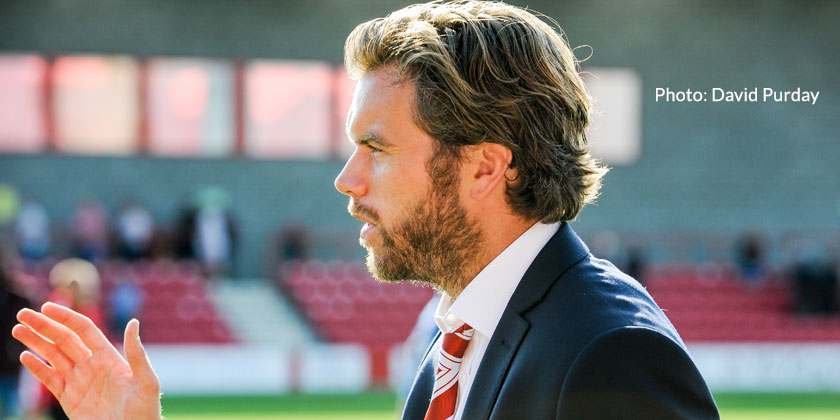 We’ve built a club to be proud of, says Fleet boss

Daryl McMahon took solace in his side’s feats this season as he took in the cheers and well wishes of the Fleet fans following defeat at Prenton Park.

“We’ve got a huge bond between the fans, the players and the staff and we’ve had to create that really, I suppose,” McMahon told BBC Radio Kent’s Matt Cole. “I think we’ve had indifferent stuff for a season in the South in the sense that we were expected to win every game and I think now we’ve come to this level, which is probably the club’s right level in the sense we’ve never been above this level, everyone can see the effort of the players and us creating a style and a good club to be proud of. And I think they are proud of it. They’re a huge part of the club, the fans, and they’ve been brilliant this season.

“The whole club, from the fans who’ve supported us brilliantly home and away, the players’ belief and the staff’s belief in what we do, trying to do things the right way which I think we have done all season, I think we’ve done the club proud this season back in the [National] League and we’ve set a high standard. And we have to make sure we try and attain it again and if we can go past it.”

The Fleet boss saw his side push Tranmere all the way for 100 minutes before the home side’s energy and pressure told in extra-time. But he was proud of their achievements.

“I’m very, very proud,” he said. “Of the players and the performance throughout the whole game in difficult circumstances in the sense we played 90 minutes and extra time Wednesday night, and to come and take Tranmere on again was huge.

“I thought we frustrated their crowd and frustrated their players a little bit as well. In terms of the game plan, we followed it really well and we probably just ran out of a bit of steam. There was nothing we could do about that after the tough week and tough month we’ve had and I wish Micky Mellon all the best next Saturday. [Tranmere] shouldn’t be in the National League. It’s a great football club.

“It’s a difficult league, it’s a draining league, there’s a lot of big clubs and big teams in it. It’s been a tough year for all of us but I think we’ve shown up alright. If we can build on what we’ve learned this year and become a little bit better, that’ll be great.”

“I thought we over-achieved. When you look at the season, the way it went, the injuries we’ve had… look at today, you’ve got McQueen – 20 goals – sitting watching; Payne, Magri, Shields, all big players for us that we’ve missed for quite a substantial amount of the season. Our spirit has dragged us to where we are now and we have to do that again and keep moving the club forward.”

Dave Winfield’s sending-off prompted some hot-tempered scenes but the Fleet boss played peacemaker as tempers boiled over on the touchline and McMahon said his skipper was on the receiving end as well as dishing out retaliation.

“Their lad [Jay Harris] bit Dave,” McMahon confirmed. “Dave’s got a bite mark on his arm and he reacted not the way he’d have liked to have done. The emotion of the game, he probably got carried away but how good’s Dave Winfield been today? He’s been incredible for us so we’ll allow him that one.

“I think we behave the right way as a football club all the time. It’s something that’s important for me that you behave the right way. Probably in that minute it got a little bit crazy. And it wasn’t just our fault, by the way, there was another team involved in that as well. We were just protecting each other.”

Fleet took advantage of the new play-off system to qualify by finishing sixth but were also on the receiving end by having to play two games in quick succession, both one-off ties and both away from home, but McMahon had few complaints about that scenario.

“I do think the system worked,” he said. “I think Tranmere deserved to have one game at home to get to Wembley. They’ve been brilliant all year, they finished second last season as well. I think it’s only right they should have that advantage, really. So I’ve got no problem with playing Tranmere once here.”

Ed Miller has been Ebbsfleet United's communications manager and programme editor since 2014 and responsible for the club website since 2007. Contact him on ed.miller@eufc.co.uk
PrevPreviousAshmore: a shame we couldn’t do it for the fans
NextMacca devises his spring into summerNext