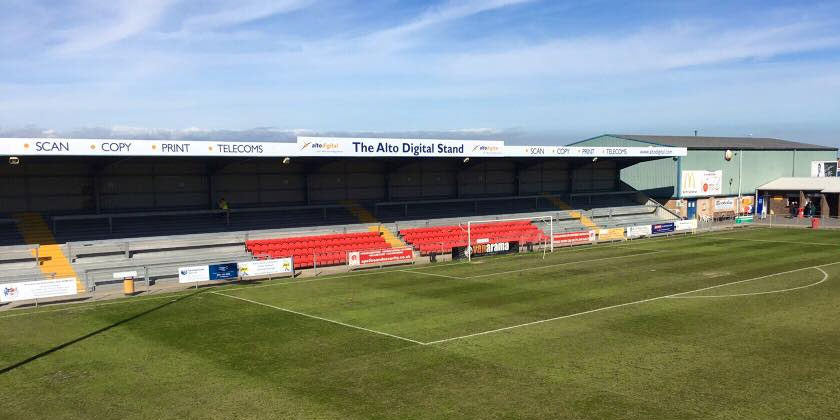 A two-goal second-half blast from Weston skipper Dayle Grubb ruined Fleet’s unbeaten away record on a day the travelling fans will want to soon forget, with many of them delayed in horrendous traffic until half-time. A late goal by substitute Matt Godden couldn’t retrieve a point in a match that Fleet desperately wanted all three from.

Fleet named an unchanged line-up and bench, understandable after a 6-0 win, but couldn’t find the same rhythm as against Hemel with the home side keeping possession well and shutting down the visitors’ routes to goal.

It took until the 24th minute for either side to have any real effort of note and it came from the Fleet, as Charlie Sheringham combined well with Sam Deering who advanced on goal and despatched a curling shot that went across the goal and just off target.

The action was more stop than start after that, with Nathan Ashmore called into action to tip over a speculative Grubb effort and Danny Kedwell firing an even more hopeful ball from long range, though it had some venom behind it.

Sheringham and Deering made way at half-time for Aaron McLean and Sean Shields and it initially seemed to lift the red shirts, Stuart Lewis sending one over after a good build-up and another effort looped just wide after Jordan Parkes turned well to get a shot away.

But 10 minutes into the half, Fleet found themselves behind after giving the ball away and Grubb accepted the favour, driving a low shot from 12 yards that skidded through several bodies and must have been seen late by Ashmore as it found its way in.

Fleet were denied a route back into the game five minutes later when Kedwell’s shot seemed to strike Ollie Barnes on the arm inside the penalty area but the referee presumably viewed it as ball-to-hand as he waved play on. Visibly frustrated, the visitors attempted to claw their way back into the Weston box and Kedwell was cautioned for a challenge on the home side’s full-back.

Weston then doubled their lead on 66 minutes when Grubb again got on the end of a Scott Wilson knockdown from a long ball forward and fired it past Ashmore to effectively kill off Fleet’s challenge.

Not that the Fleet lay down and bringing Godden on for John Paul Kissock, they went all-out for a lifeline.  One arrived 13 minutes from time, Matt Fish’s cross met by Godden’s head as the top scorer added another one to his tally for the season. McLean then drew a smart save from Luke Purnell as the climax became a little frenetic. Godden had another chance cleared off the line before things got antagonistic on the sidelines when Fleet tried to get a new ball back in play quickly but with time ticking away, Fleet’s opportunities grew fewer.

The Woodspring Stadium has rarely been a happy hunting ground for the Fleet, who lost here in the last promotion run of 2010/11, and it’s now all eyes on Stonebridge Road on Monday as Dartford arrive in what is arguably the most important North Kent derby in the history of the fixture.