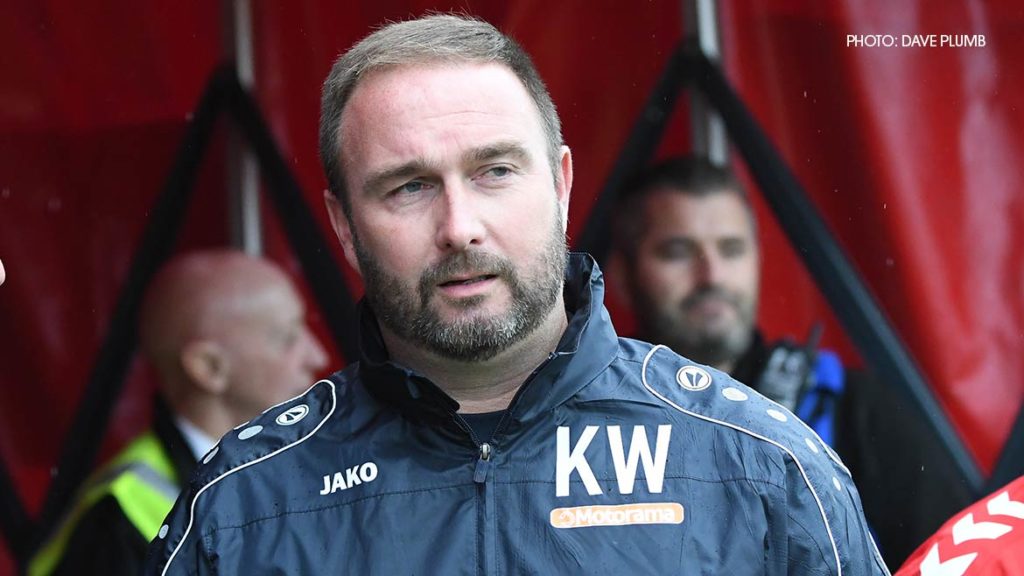 We’re all on board, says Watson

Kevin Watson has enjoyed a further week with the Fleet players, having previously had just two days to get his new ideas across before last Saturday’s game against Maidenhead United.

And ahead of the Emirates FA Cup clash with Woking, Fleet’s interim boss is determined to stamp his brand of football on the team – something they have been responding well to.

“They’re great lads and we’ve spoken this week,” Watson told the EUFC website. “What I like is I’ve had chats with four players who have come up to me and asked what they can do to get in the team. They like what we’re trying to do and they’re all on board.

“If I had an issue with a player, if they weren’t in our plans, I would tell them because it’s not fair to them. I don’t want any bad eggs, I want players as a squad who even when they’re not playing are willing our boys to do well and I think we’ve got that. Everyone will get a chance while I’m here and they’ve been spot on in the time I have been.”

Watson’s desire to play a more flowing, passing game is something he was and is keen to implement quickly.

“I saw what we had when I arrived here and having known a lot of the boys and what they’re about, I thought it was an ideal way to play,” he said. “I wanted to change some things, I am my own person and I’ve always liked 3-5-2. I brought Marvel Ekpiteta in and he’s done brilliantly for me at Bishop’s Stortford and Hungerford when I worked with [Hungerford manager] Ian Herring and then Newport County came knocking for him. As soon as he became available, I thought that’s something I need as I played him in a three before.”

Albie Morgan is another impressive new recruit and Watson was keen to fit the Charlton midfielder around his style.

“Albie originally, understandably, had to be persuaded. He’s played in League One play-off semi-finals last season, he was concerned about the league position and perhaps the way he thought we were going to play and I had several conversations saying that he fits in to what I want to do massively. He was arguably the best player on the pitch last Saturday. I couldn’t have been any more pleased with him. It’s a shame he can’t play this Saturday, but he has the rest of the month with us and when he goes back to Charlton I think he’ll be in and around their first team. That’s how highly I rate him, he’s an exceptional young footballer and I think we’re incredibly lucky to have him. I can’t believe a League One club hadn’t come in for him before.”

And Watson admits he’s learning all the time, certainly out of necessity having been thrust into the limelight against Maidenhead.

“After the Torquay game I had the lads in just for Thursday and Friday. I thought Saturday up to a point we were very good. We passed the ball exceptionally well. You have to bear in mind that with such a short space of time, I almost had to use the actual game environment to make judgements. I was still in that game asking myself what do we need, where do we go, how are we going to play and react. I was really pleased with how the boys did, as I say up to a point. To concede from two set pieces was disappointing, especially where the first one was a bit of a freak. We didn’t work their keeper as much as I would have liked, if at all to be fair.

“But it’s pleasing the players heard me, listened to me and carried out what I want which is to get the ball through to the front fast, two or three-touch, and shift other teams around. But you get to a point on the pitch where you can’t decline a cross or a shot at goal.”

And Watson is hoping his philosophy can impress the fans and the powers-that-be in the time he is given.

“It’s difficult to accomplish straight off. I think the way we tried to play was well received and losing in that manner meant we did at least show progress. But I have a problem losing full-stop and we all know it’s a results-driven business.

“All I would say at this point is I’ve done my apprenticeship, we are bottom, I’m taking over a team that has to be low in confidence and hopefully the owner can see a transformation. I think the people who have spoken to me since said they had seen a change in two days – so how does anyone change it more than that immediately? I would back myself over time to get results and mould the squad as I like to climb up the league.

“I feel I’ve done plenty of apprenticeships and this is the chance I’ve been waiting for, albeit not in great circumstances because Gary obviously brought me in and literally a week later, he’s lost his job. So they’re not ideal circumstances, I have to say.

“But I went and met the owner. He’s straight talking and told me what he would like. It’s a difficult position we find ourselves in but one I have said I’m quite prepared to take up the challenge on.

“I have a group of players now who I cannot believe they are where they are. It is incredible that we are bottom and two wins from being out of the bottom four. I got Tristan Lewis in last Saturday who has worked at this level and he can’t believe it either.”

But Watson is refusing to use that as an excuse for his side’s predicament.

“When you’ve played this many games and you are there, then you’re there for a reason. So whatever that reason is, we need to pinpoint it. It’s difficult to turn it around in two or three games. Anyone in football in their right mind will know you’re not just going to change it completely in two games. What I would hope is that everybody has seen enough of a change in that first 48 hours and the way we’ve tried to play to know this group of players, if we have longer with them, will get out of trouble and try to climb this league.

“It’s all about developing. Even last Saturday, I’m still learning who can play where. I learned stuff from Saturday’s game and if we had Maidenhead again this Saturday, I would do some things differently as a result. You’re always learning and that’s where we’re at. It’s a good job to have, there’s many that would like it and I feel privileged to have it currently and I’m working with good footballers. Like everything, it will take a little time and hopefully we can get results on the board at the same time.”

Ed Miller has been Ebbsfleet United's communications manager and programme editor since 2014 and responsible for the club website since 2007. Contact him on ed.miller@eufc.co.uk
PrevPreviousThis is no free hit
NextLV BET Hospitality CompetitionNext