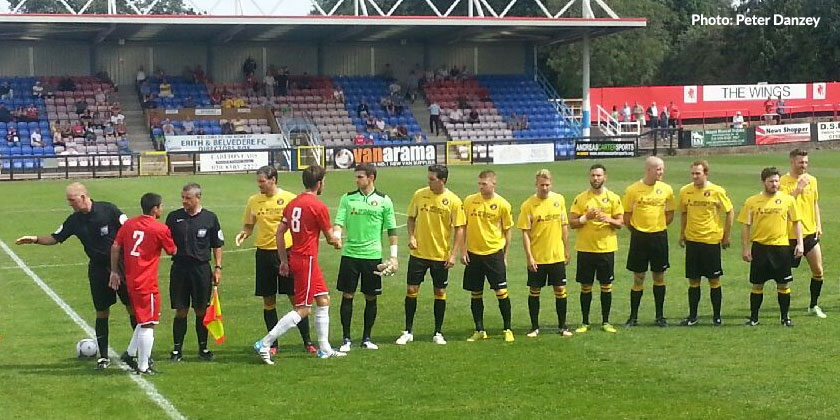 Fleet repeated the 3-2 scoreline of their previous visit to Park View Road with two-goal Jordan Parkes the hero in an entertaining match against National League opponents Welling United.

Daryl McMahon’s side played some pleasing football in the opening period and kept Welling largely confined to a defensive game for the first 45 minutes. Parkes grabbed his first before the 10-minute mark was out, left to convert a routine loose ball after Welling goalkeeper Ben McNamara and his defence failed to clear their lines.

A confident Fleet found a range of passing that had the home side scampering after the ball and unable to stamp any authority on the game, with Parkes, Stuart Lewis and John Paul Kissock showing a work rate and willingness to close down in midfield that, if they can maintain it into the season, should give plenty of other sides food for thought.

Fleet should have extended their lead on numerous occasions and Alex Osborn, Danny Kedwell and Parkes again all went close. Only on the stroke of half-time did the second finally arrive, Kenny Clark’s close-range finish from a corner enough to establish a commanding lead going into the break.

The usual pre-season flurry of substitutions disrupted the game from a Fleet perspective after half-time and 10 minutes into the second period, former Sutton player Robbie Wellard headed home a cross past a previously resolute Brandon Hall. And just past the hour mark, the Wings were on level terms, Afolabi Obafemi tucking home a cross from the impressive former Leyton Orient and AFC Wimbledon striker George Porter.

Fleet picked the pace up again in the closing stages and McMahon will be pleased to see the effect of his new signings as Parkes was on hand again, arriving at the far post to deftly head home a Matt Fish cross. Welling failed to respond in the remaining minutes and Fleet chalked up their third pre-season victory in a row.

Ed Miller has been Ebbsfleet United's communications manager and programme editor since 2014 and responsible for the club website since 2007. Contact him on ed.miller@eufc.co.uk
PrevPreviousFleet to add full-back cover in Braham-Barrett
NextPlayer sponsorships still availableNext