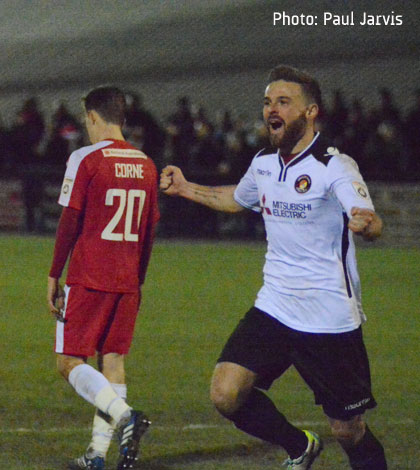 Fleet turned in an extraordinary performance to reverse a 2-0 deficit at half-time, survive the sending off in extra time of Anthony Acheampong and then win this FA Trophy replay at the death with a late Matt Godden strike.

As if the recent Fleet-Welling dramas weren’t enough for the headline writers, this had thrills and spills and will be long remembered by Fleet fans who were in fine voice throughout the match.

As promised, Jamie Day handed opportunities to a number of players who had yet to perform for him, and in came Shane Huke, Matt Johnson, Alex Osborn and Brendan Kiernan. And the new-look Fleet looked hungry in the opening exchanges, Johnson supplying a neat pass on two minutes that allowed Godden sight of goal and he had Benji Buchel stretching with a low shot.

On seven minutes, Kiernan slipped his marker down the left and fired in an excellent low cross. Godden beat Buchel to it from close range but the ball came back off the woodwork and Johnson skied the rebound over. It took Welling until the 12th minute to carve out their own opportunity when Sam Corne’s diagonal delivery allowed Malachi Hudson to whip a shot across goal but he ended up snatching at it and Brandon Hall was untroubled.

Kiernan continued to probe the flanks and Osborn was full of running and the two combined to force another save in his six-yard box from Buchel as Fleet kept the pressure inside the home box rather than along the edges of it.

But against the run of play Welling found themselves ahead in the same circumstances as they had at the PHB Stadium on 28 minutes. Anthony Acheampong wrestled Aristide Bassele rather too much for the referee’s liking inside the area and Keiron St Aimie stepped up to fire home the penalty past Hall. In the meantime, Dean Rance – who seemed to have been under rather too close attention from Welling tackles – limped off to be replaced by Billy Bricknell, meaning Johnson moved into the centre and Osborn out wide.

That goal gave the home side more confidence but Fleet still managed to create several openings. Godden saw his header cleared off the line by Zach Fagan while McMahon sent a fierce free-kick into Buchel’s midriff. Buchel also had to be alert to another Kiernan cross, robbing it from Osborn’s head as the Fleet No.9 rose to nod home.

But in first-half stoppage time, Welling looked like they’d done enough to kill off the tie with a well-worked second goal. Tyrone Marsh played a neat one-two with Bassele to wrong-foot the Fleet defence and when Bassele back-heeled into Marsh’s path, the visitors were wide open, allowing the Oxford loanee to fire his side into a 2-0 lead.

Down on their luck and probably feeling a little punch-drunk to be two goals behind, there didn’t seem a route back into the game for the Fleet. But they found one nonetheless. The second half probably saw fewer chances created, but of those that were, Fleet finished them. And it took just six minutes for the first when Johnson freed Osborn with a well-hit pass, who in turn steered the ball into the box where Kiernan was waiting to knock it past Buchel.

That was just the tonic the Fleet needed and they took the game to Welling, McMahon twice firing just over the bar. Anthony Cook replaced Osborn, who had run himself into the ground, and he was the man to rescue the game eight minutes from time. As the visitors buzzed around the Welling box, they won a succession of corners. From one, McMahon forced Buchel to punch clear and it sat up nicely for Cook who hit a low shot hard and fast through a crowded penalty area and it flew into the bottom corner.

Fleet could even have won it in normal time as Cook curled a free-kick agonisingly wide of the upright and then Godden headed just over before extra time was confirmed.

Extra time was a cagey affair and Welling could have wrapped it up towards the end of the first period but Hall kept the visitors in it. First he denied St Aimie with a superb reaction save on his goalline and then Marsh’s shot was pushed clear by Hall, though Kenny Clark almost converted it in his haste to clear off the line.

Karn Miller-Neave came on in a left-wing position but he barely had time to settle when he was forced to left-back when Acheampong received a second yellow card for a clear trip on Bassele as he ran through the Fleet midfield. With 11 minutes to survive, Fleet battled manfully, none more so than Miller-Neave who got in two saving tackles on St Aimie, who was a good foot taller than him. Welling stepped up the pace, clearly looking to force the issue before penalties loomed. Bassele fired a low shot that whistled past the foot of Hall’s far post and Marsh saw an effort go the same way.

Amazingly, the Fleet conjured up more magic with three minutes left. McMahon ghosted past Chris Bush and delivered a low cross that was perfect for the onrushing Godden who scooped it past Buchel to send the travelling fans wild. Fleet played out the final minutes with confidence, nullifying any Welling attempt to fashion an equaliser and hand Jamie Day his first win and against his old club – and in the most memorable manner possible.

Forest Green and Ady Pennock await in the next round and you wouldn’t bet against a Fleet side showing this spirit.

Ed Miller has been Ebbsfleet United's communications manager and programme editor since 2014 and responsible for the club website since 2007. Contact him on ed.miller@eufc.co.uk
PrevPreviousTurner returns to Fleet
NextFleet land Marsh on Christmas EveNext