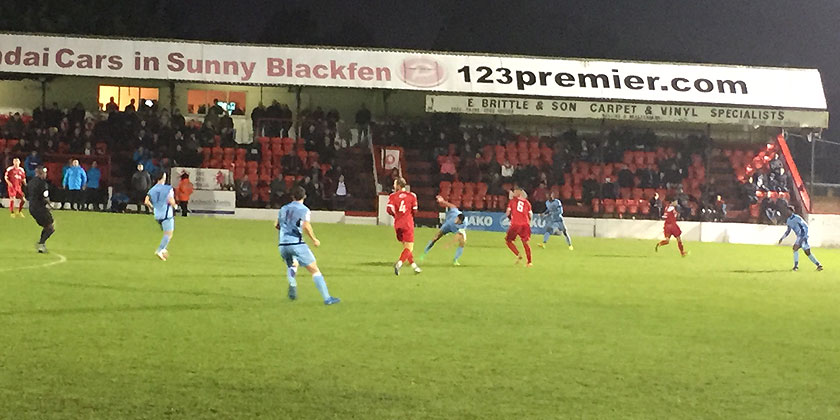 A winner from Jack Powell right at the end of this tough match saw 10-man Fleet pocket three points to spark jubilation on the field and on the terraces as the visitors made it eight games unbeaten in the league. Dave Winfield’s 38th minute sending-off made it an uphill task for the Fleet, who led 1-0 at the interval, but the players dug in until Powell’s strike relieved the pressure.

Daryl McMahon was once again able to name an unchanged line-up as Fleet kicked off against a Welling side playing for the first time at home since the return of their – and our -former manager Jamie Day as first-team coach.

Fleet were straight on to the attack when Danny Kedwell leapt between the Welling centre-backs to get a header on target but he had strayed just offside in the build-up. Welling had a chance of their own immediately after that when Fleet were guilty of giving the ball away in defence and Wings top scorer Adam Coombes blazed the ball over the bar when he was well-positioned to test Nathan Ashmore.

But 13 minutes in, with a lack of chances since the initial flurry, Fleet were in front. Anthony Cook sparked an attack on the right flank and Powell launched a low delivery into the Welling box where Darren McQueen met it and dinked a shot round his marker that sneaked in at the near post.

Powell had an opportunity to extend the lead minutes later when he arrived on to a Sean Shields through ball but that was just off-target. The home side weren’t overawed by the setback, however, and Ashmore had to be alert on several occasions as the strikers in front of him showed plenty of good movement. Lyle Della-Verde tested the Fleet goalkeeper with a shot after Welling had patiently put a passing movement together with Fleet’s defence chasing shadows. The same Welling player had an even better chance on 24 minutes but Ashmore got a wrist onto a shot from eight yards out that spun through several players before being cleared. And the Fleet keeper earned his money once more from a free-kick as Coombes’ set piece took a touch off the wall but still couldn’t wrong-foot Ashmore.

Fleet took the pressure off from the half-hour point and McQueen had a good shout for a penalty when Rickie Hayles barged into him, before Kenny Clark was a whisker away from getting a touch on a Powell free-kick.

Then came the talking point of the first-half, seven minutes before the break. An initially innocuous-looking clash between Dave Winfield and Matt Fish escalated as Winfield was judged to have led with an elbow and amid a storm of protest and counter-protest, the referee issued the Fleet vice captain with his second red card of the season. That resulted in immediate tactical switch for the Fleet, goalscorer McQueen making way for Jack Connors, and the makeshift back four held off another attack by Coombes to see the half out with a 1-0 advantage.

Another switch as the second half began, Sam Deering making way for Marvin McCoy, introduced a traditional Fleet back four but with Danny Kedwell marooned up front on his own, Welling’s territorial advantage grew considerably. On 49 minutes the first of several Welling corners was swung in dangerously close to Ashmore’s goal but whistled along the six-yard box and six minutes later Ashmore parried Coombes’ effort as the home side continued to press Fleet into their own half.

But the visitors were always looking to find a chink in the Welling armour and when Powell’s deep delivery from a free-kick found the head of Phillips, it seemed a certain goal but the ball veered away to bounce the wrong side of the post. Powell then picked out Shields with a raking through ball and the Fleet winger battled manfully against Fish before going to ground. The referee produced what seemed a laughable caution for the Fleet winger to provoke howls of anger amongst the visiting fans.

With Fleet fans still disgruntled over the decision, the action switched to the other end and the home side equalised. Sam Hatton’s corner flew out of the traps and former Bromley midfielder Danny Waldren raced on to it and planted a firm header through a ruck of players for 1-1.

Welling had two more chances to edge things in their favour. First, Waldren drove a powerful shot from outside the box that hit Phillips’ arm but the referee considered it was ball-to-arm and he waved away protests, including those of Jamie Day who was threatened with a walk to the stands. Then Ashmore saved the Fleet as he somehow reacted  when Mitchell Nelson reached a corner and sent it goalwards only for Ashmore to perform a miracle and stop the ball with his legs before shepherding it clear of danger.

It seemed both sides would settle for a point at that stage but this game had reckoned without Fleet’s persistence and Welling’s tendency to concede late. With a minute on the clock, it seemed Craig Braham-Barrett would see out a ball on the right byline. But substitute Bradley Bubb had other ideas and he brushed Braham-Barrett off the ball, manouevred his way into the box and cut it back into space for Powell who kept a calm head as defenders rushed in to block him and picked his spot before sending a shot beyond Chris Lewington to send the Fleet fans into wild scenes of celebration.

Ed Miller has been Ebbsfleet United's communications manager and programme editor since 2014 and responsible for the club website since 2007. Contact him on ed.miller@eufc.co.uk
PrevPreviousFleet up against some old faces
NextMacca’s faith in 10 men pays offNext