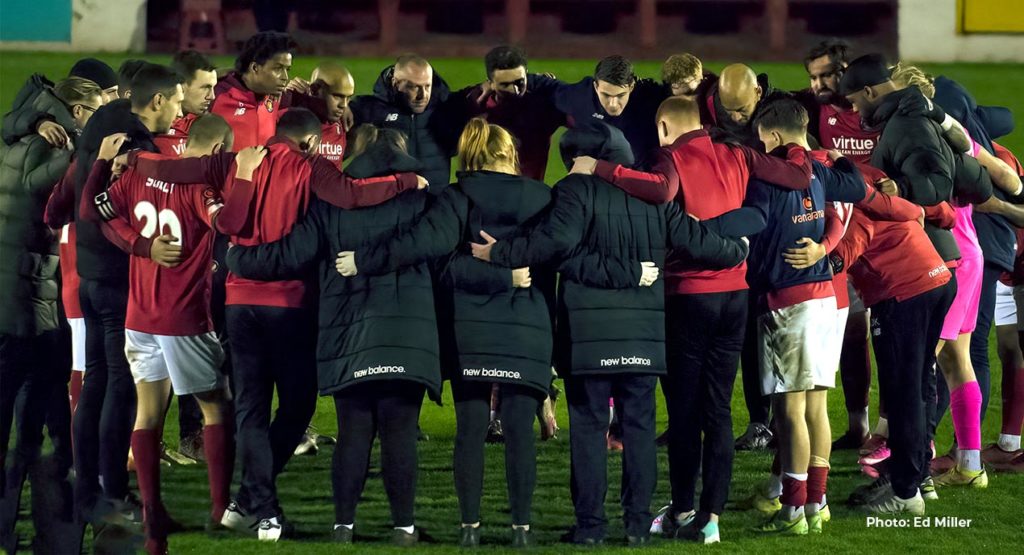 “We wanted to achieve for the fans”

Dennis Kutrieb played it cool as his side banked the three points after the North Kent derby – but he knew it meant the world to the Fleet fans who poured out of the gates not long after Ben Chapman’s winner had decided this first game of 2022.

“It’s more for the fans than for me if I’m honest because for me it’s three points on the board and I want to have in every game three points. But I played long enough and I’ve managed long enough to know what it means for everyone else and in the club it’s the biggest rivalry for us. Of course the players have to be aware of it and prepared for it.

“It’s a derby and derbies are different so you need to deliver the basics, to run, to work hard. You need to win your headers, your 50/50s. We had our quality and we were able to deliver certain things on the pitch when we had enough space and that’s what we did. We made important changes, as you could see Ben Chapman scored the winner and our squad has a little bit more depth now after Covid and after a few injuries and everyone is back on track and available for us.”

Of course January brings talk of transfer windows in higher divisions – such a window doesn’t apply to the Fleet, but Kutrieb is adamant he has enough quality in his squad right now that only a signing he couldn’t turn down would be considered in the short term.

“We’re not really looking for it,” he said. “But if something falls for us and it’s something where we say we must do it because it’s a perfect fit for us , I wouldn’t say we never would do it. But at the moment 23/22 players available and that means we have a good squad so we don’t need to add something [unless] it makes sense for us. It would mean that player would be able to start games for us. That’s what I said three weeks ago after a defeat, that’s what I say now. They have the right character, the right attitude and it’s not easy to find to be honest.”

For character and attitude, Fleet fans need look no further than matchwinner Ben Chapman who was named on the bench only to be introduced at half-time and fire home the crucial goal six minutes from full-time.

“Chapman has got a few goals for us in the past, even in training sessions,” said his manager. “You can see that he is able to do it. He’s such a good character and first and foremost we want to have the right characters. You can see it all over the pitch; it doesn’t matter if you win or lose a game, you need to react in the right way. The games are coming thick and fast now and we have a tough January and February.”

The derby win sent Fleet into second place above New Year leaders Oxford City but Kutrieb says points are what he looks for at the end of games, not table position.

“We are well placed and we take it, especially after the game today because it’s [against] a top team in the league. When you drop points against Billericay, who played a good game against us and defended really well, we needed everyone prepared to play again. I could see the energy levels were much higher, so these five days helped a lot. And now we have another six days and will get better with the energy levels after the Covid situation.

“I’m very happy with today because we dominated a top side of this league for nearly 90 minutes. They had two chances after two mistakes from us and that’s it so I think it’s a massively deserved win. [The table] means nothing because it’s still not 50% played and even if we had played 80% of the games it means nothing. But every three points means we are still there in the mix where we want to be. It’s going to be a tough season for everyone and I wouldn’t be surprised if we have automatic promotion [going down to] the last game day.”

Ed Miller has been Ebbsfleet United's communications manager and programme editor since 2014 and responsible for the club website since 2007. Contact him on ed.miller@eufc.co.uk
PrevPreviousFleet 1-0 Dartford
NextPoleon praises graft and goals spreadNext