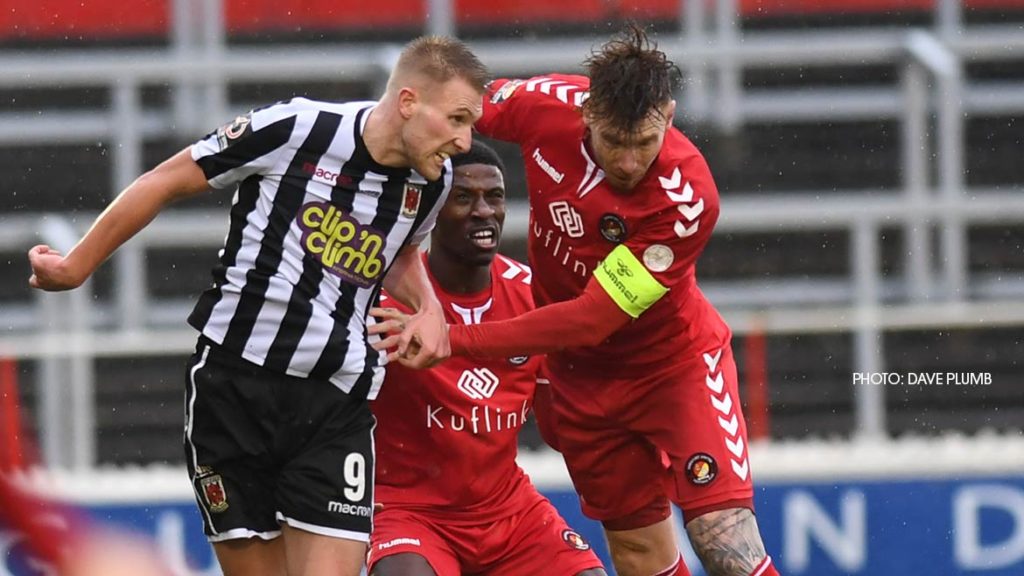 We rode our luck but we won ugly

Kevin Watson believed this afternoon’s crucial victory was more about the gritty nature of a positive result than the performance in a 90 minutes where the conditions dominated.

“We have a good knack of bouncing back from bad results and indifferent performances,” he told BBC Radio Kent’s Charles Webster. “Today we won ugly. We rode our luck. I’m adamant it wasn’t a penalty – Greggers takes his feet away, he lifts his hands in the air and the guy goes over. And then he makes a fantastic save and then another. When you’re down there and hanging on and desperate to get over the line, sometimes that happens.

“I wasn’t particularly pleased with the defending in the last 10 minutes but we can work on that. At this moment in time it doesn’t matter, we’re three points closer.

“Conditions were terrible. You don’t realise in this main stand how windy it was. The pitch cut up. It was going to be nervy, two teams fighting for their lives, it wasn’t ever going to be Man City-Liverpool. I’m not sure what people expected in difficult conditions. We didn’t play particularly well with the wind behind us in the second half and I don’t think they did with the wind behind them. Both teams did a little bit better against the wind.”

Watson made four changes after the reverse to Royston and he revealed his team selection was as up in the air as the ball was at times amidst Storm Dennis.

“We have competition for places now and I picked a team based on how players trained,” he explained. “Jermaine McGlashan has played four or five games and looked a bit jaded. People will ask why I left him out. Tomi Adeloye was unfortunate not to start but I put the last name on the teamsheet at twenty-to-two.

“I’d been wracking my brains all week because none of them have given me a case to definitely play so I went with my gut feeling which was a little bit leftfield to play Adam Mekki at the top of the pitch but his willingness to run and running power would stretch them. John Goddard played in the hole and did well, not his conditions. Then you drop Adam back in there.

“Gozie Ugwu ran himself into the ground, he scored two up there and it probably kept him in the side today. He did his job, then you put Tomi on. It’s a squad game and about all the 19, 20 players we have. The team that started today will more than likely not be the team that finishes at Aldershot on the last game of the season.”

Watson felt his side didn’t get behind Chorley enough based on the homework the Fleet had done on the visitors, but was more than happy with his skipper’s first goal of the season.

“It’s a great finish from Kingy. If I’m being a little bit picky, we knew Chorley liked to be expansive, spread out their back three and play. But on a turnover, there were big gaps to exploit, that’s how it was today and we just didn’t quite have the quality to break them down. When Glash breaks [at the end], a ball in front of Tomi Adeloye and he’s in on goal but it goes behind him and you’re on the back foot again.”

It’s been a week of change for the Fleet with CEO Damian Irvine now in place and Watson hopes the new man has the calming effect behind the scenes to allow the football to take centre stage.

“We met him yesterday, he came to the training ground,” Watson said. “I didn’t think he was going in to speak to the lads but just before we went out, I called him in. He’s a nice guy, we had a good chat. He’s got a great CV, he’s been there and done it and knows what he’s doing. I think we’re in good hands, most certainly from the chat I had with him for 10-15 minutes and from how he addressed the players, I think we’ll be OK. It’s been a tough time for the club, right from the very start of the season when Garry Hill had hardly a squad from the first game.

“I will not have any talk of the word relegation because I still firmly believe that this club will stay up. There’ll be people who’ll disagree because of the situation we’re in but that’s why the game’s all about opinions.

“There’s not one player or staff that believe we are done because we’re not. It takes grit, determination to win a game when two teams are scrapping for their lives, especially after last week. I don’t think I got over it until midweek even though it was the Trophy and may be a blessing in disguise but I don’t think so.”

Ed Miller has been Ebbsfleet United's communications manager and programme editor since 2014 and responsible for the club website since 2007. Contact him on ed.miller@eufc.co.uk
PrevPrevious“I’m here for the long term,” says CEO Irvine
NextPressure doesn’t exist, says cool customer GregoryNext