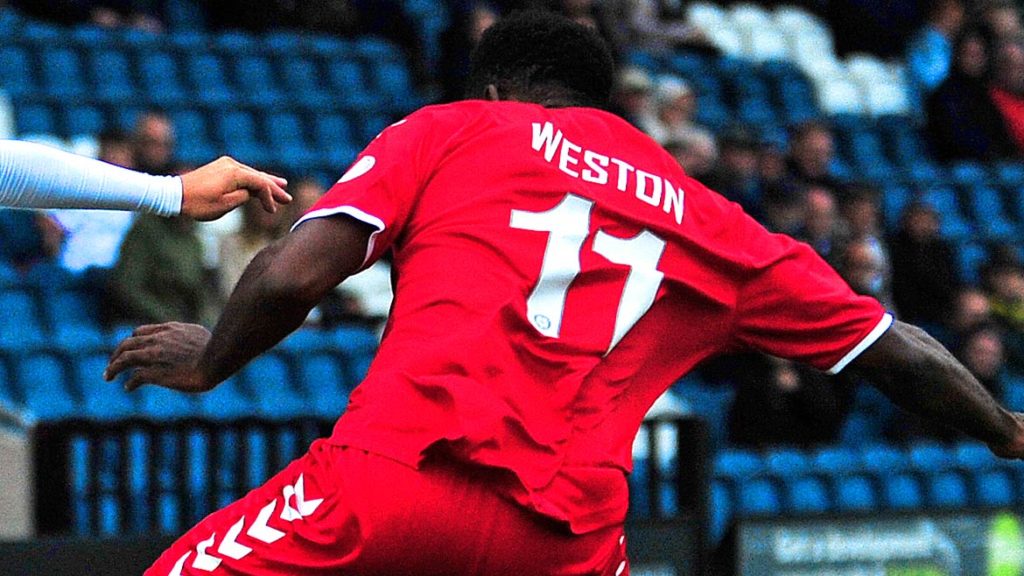 We have to make teams earn goals, says Weston

Fleet goalscorer Myles Weston echoed his manager’s words after the final whistle at Solihull, saying once his side cut out the needless goals, they can get those elusive points on the board.

The Antigua & Barbuda international, who re-signed for the Fleet in the summer, scored his seventh goal for the club as they enjoyed taking the lead in the 9th minute.

“That’s the first time we’ve gone ahead this season,” Weston told BBC Radio Kent’s Charles Webster. “It gave everyone a lift and it’s important. It’s been difficult because people don’t have to earn goals against us, we’re giving them goals. It’s not like the Bromley game where [Billy Bingham] struck it and that was a great goal and Ash couldn’t do anything.

“But we’ve got to make it difficult for people to score and today we did other than that second goal. We didn’t make it easy for them. They won 6-1 on Tuesday and today we worked together, we looked like a team. It’s just we’ve got to grind and keep going and keep working to get these first points on the board.”

Weston’s first-half strike was his first domestic goal since the Tranmere play-off game and it was one the wide man carved out for himself.

“I played right wing-back and I ended up on the edge of their box,” he said. “It fell down to me, I took a couple of touches and I just struck it. I thought, just hit it and hit it low and hard. It went far post and I was happy with the goal.”

Nonetheless, Fleet came away pointless once more but Weston revealed the dressing room is refusing to get downhearted.

“It was good, we played well today,” he said. “If we cut out the errors and the switching off, we’ll be alright but we have to do that sooner rather than later. We definitely played well, the performance was solid.

“Considering they’re top of the league and I think they’ll be up there, to me they didn’t really threaten us. In this league, once you switch off once or make a mistake you can get punished and I think that’s what happens today.

“We’ve got to be positive because we can’t afford to be negative. It’s early on in the season but we’ve got to make the ground up now. It’s important that everyone stays focused, we work together and keep going. We want to get points on the board now, sooner rather than later.”

The Fleet’s No.11 was deployed as a roving wing-back to the right of a central defensive three and he felt comfortable in the role.

“Considering that’s the first time we played that system, I think it suited us,” he confirmed. “To be honest, I don’t think systems are the problem, it’s just we’ve got to believe and stick together and grind. It’s going to be hard to get the results, it’s not going to be easy, no-one’s going to give us a result. So we’ve just got to stick together and keep going and grind it out. Right now it’s like this – but I tell you what, we’re going to work hard and get out of this and turn it around. We have to, we’ve got no choice.”

Ed Miller has been Ebbsfleet United's communications manager and programme editor since 2014 and responsible for the club website since 2007. Contact him on ed.miller@eufc.co.uk
PrevPreviousFleet boss confident results will turn round
NextNational League 40th anniversaryNext