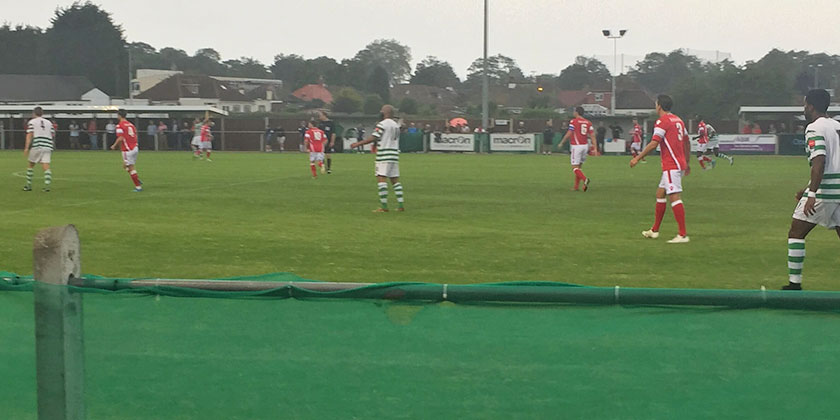 Ebbsfleet United’s first pre-season friendly on English soil produced the desired result as a well-organised visiting side came away with a 3-1 win at their Ryman Premier hosts.

Michael West and Aiden Palmer both had minor injuries and sat this one out and Daryl McMahon started with Tom Bonner wearing the armband for the second game running.

The hosts, minus new signing Cesc Fakinos but with the experienced Richard Graham in their midfield, began brightly and Leon Fisher broke through only to see Brandon Hall quickly off his line.

Fleet hadn’t done much of note in the opening spell but scored with their first attack on six minutes. Matt Fish’s searching cross from the right travelled some distance over the heads of the VCD defence and Osborn got his head on it under pressure at the far post to convert the chance at close range.

Hall was on duty again on 10 minutes when John-Paul Kissock got caught on the edge of his own box and the VCD No.9 broke clean through, thwarted only by the Fleet goalkeeper’s speed off his line.

That was about the only thing Kissock did wrong in a first-half he controlled from just in front of the back four, building up play slowly and methodically while also unafraid of carrying the ball into the opposing half and laying off passes to his teammates.

Stuart Lewis drove in a couple of shots from distance that weren’t far off before Fleet doubled their lead on 26 minutes when the referee awarded a penalty for handball. Matt Godden fired it low to the goalkeeper’s right, nicely placed into the bottom corner.

There was some neat passing and approach play in the final third with Godden and Adam Cunnington looking for a way through the VCD rearguard and the pair combined shortly before half-time, but Cunnington’s shot to the far post was skewed wide which should have made it 3-0.

A raft of changes in the second half seemed to disrupt VCD more than the Fleet and where the hosts had threatened in the first half, they spent much of the second with their backs to the wall. That said, nine minutes after the restart they had the ball in the back of the net when Jonathan Miles raced out of his box and the home side took advantage to hit the empty net. However, the referee had pulled play back for a foul – so VCD simply repeated the trick, Ashley Probets striking the free-kick past the diving Miles.

Fleet weren’t pegged back for very long and on 56 minutes extended their lead, Joe Howe, Jordan Parkes and Sean Shields involved in a build-up that saw Fish collect down the flank, delivering a cross right onto Danny Kedwell’s head and he powered the ball home.

Daryl McMahon’s side continued to press, with Parkes especially coming close on several occasions with a number of shots. Both Academy players, Karn Miller-Neave and Shilow Tracey, looked assured and Tracey in particular caught the eye playing out wide – surely one to be loaned out for experience and likely to be knocking on the first-team door after that.

Try as they might, however, Fleet couldn’t add any polish to the scoreline but will be more than satisfied ahead of Saturday’s visit to Welling.

Ed Miller has been Ebbsfleet United's communications manager and programme editor since 2014 and responsible for the club website since 2007. Contact him on ed.miller@eufc.co.uk
PrevPreviousThe Maccas go head to head
NextPreston loaned to Boreham WoodNext