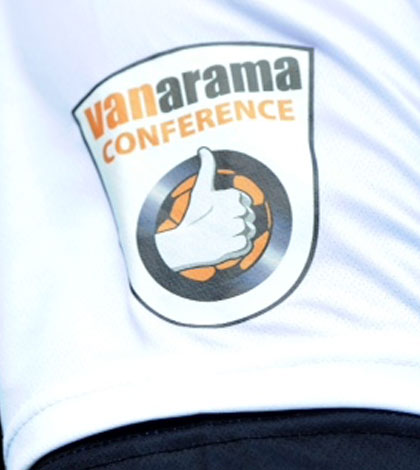 The Vanarama Conference is shortlisted in the category or the ‘Best Sponsorship of an Event or Competition’ alongside BMW’s 2014 Ryder Cup golf partnership and Stella Artois work as The Official Beer Supplier of the Wimbledon Tennis Championships.
The sponsorship was brokered by London-based sports marketing consultancy SportQuake who also manage the day-to-day activation.

As a result of the partnership, which is in its first year and has been extended to include the 2015-16 season, Vanarama’s brand awareness amongst football fans currently tracks at 25%.

Thanks to Vanarama, famous faces including Michael Owen, Robbie Savage and Matt Le Tissier were amongst more than 2,000 who tweeted their support for the Non-League Day campaign #Thumbsup4NLD and Vanarama also backed Football Conference clubs playing in the FA Cup to raise awareness in the wider football community.

Innovative Football Conferences prize giveaways, including Santa’s Van and Van-en-Tine’s Day, operated through Vanarama’s social media account have resulted in a growth in followers of 1,800% since the season kicked off.

Football Conference Chairman Brian Lee said: “Recognition from the Sports Industry Awards is no less than Vanarama richly deserve. As a sponsor and a partner, they have engaged with the Football Conference, its member clubs and most importantly our loyal fans with the fun values that we stand for. Whilst football headlines at the top level in this country is dominated by finance, the priority for the Football Conference is to share and celebrate the value of our national sport in a way that is enjoyable and exciting. Their contribution has been at times, witty, funny, catchy and even cheeky. It is refreshing to see this likable element permeating throughout our game. We know from the response our fans have made they appreciate the accessibility between all we do spearheaded by our title sponsor”.

Vanarama Brand Director Steve Mark said: “As title sponsors of the Vanarama Conference, we’re very proud to support all 67 clubs across three divisions. Vanarama recognises that it is the fans who make football and we’re delighted with the way Football Conference fans have engaged with us since the start of this season.

“To be shortlisted for a Sports Industry Award, the industry’s most prestigious award, alongside brands including BMW is testament to the hard work of all involved. I look forward to Vanarama’s partnership with the Football Conference as we approach the business end of this season, next year’s competition and beyond.”

The Sports Industry Awards night takes place on Thursday 30th April, 2015 at Battersea Evolution. The full shortlist can be found at: www.sportindustry.biz/events/awards/2015/shortlist

Ed Miller has been Ebbsfleet United's communications manager and programme editor since 2014 and responsible for the club website since 2007. Contact him on ed.miller@eufc.co.uk
PrevPreviousBishop’s Stortford 1-1 Fleet
NextFleet reiterate support for Football v Homophobia campaignNext