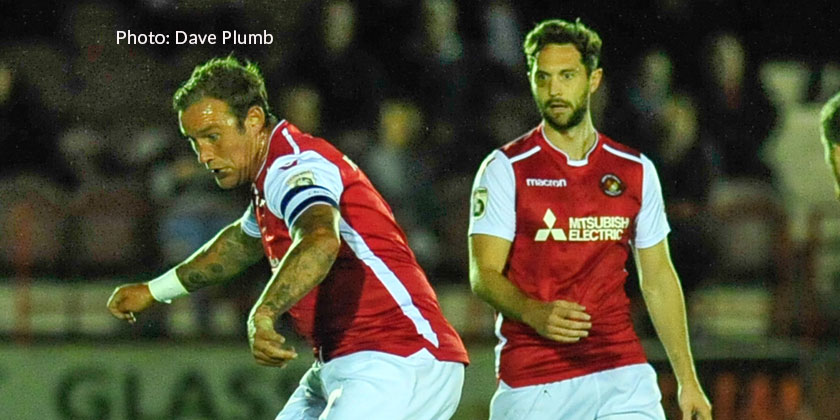 Tranmere in town ahead of tantalising league clash

With numerous Wembley appearances including a League Cup Final, plus two FA Cup quarter-finals and three play-off campaigns for the Premier League behind them in the past 20 years, it’s safe to say Tranmere Rovers are certainly one of the bigger clubs to come to Stonebridge Road in recent times.

Yet just a point separates them from the Fleet as the two prepare to do battle for the first time ever this Saturday.

Micky Mellon’s embattled side have three wins from 10 games this season but have followed up every one of those with a defeat as consistency continues to be hard to come by at Prenton Park.

Tranmere’s woes are temporary, though, according to Fleet boss Daryl McMahon and he sees plenty of parallels in their pursuit of the National League title and his own side’s quest for the South last season.

“Tranmere were the outstanding favourites to win the league before a ball was kicked,” McMahon told FleetOnline. “It’s a long season and I’m sure Micky Mellon is saying the same to his players and his supporters as we are. Tranmere will be feeling a little bit like we did last year, that weight of expectation you carry when you’re the biggest club, the favourite or best-supported club in the division. At this stage last year we had back-to-back losses against Chelmsford and Gosport. We had maybe three wins, the rest were draws and two defeats. It’s a bit like that for Tranmere now but there’s many months left in the season.”

Like his opposite number Mellon, McMahon has also been disappointed with the points return of his own side. “Even our start this year isn’t that different to last year,” he said. “We’re missing a win or two by comparison, but it’s similar in that we’re getting plenty of things right but we need to start putting the ball in the net when we’re on top. We’re disappointed with our start but we’re only one point behind Tranmere and we need to go out there, enjoy the game against them but also respond at key moments in games as we know we can.”

The Fleet boss acknowledged that the league table might not be nice to look at for supporters this weekend, but urged backing for his players who only need to get into the rhythm of a couple of wins to shoot back up the division. “I read an interview after Tuesday with Steve Bruce saying the hysteria around Aston Villa every time they don’t win a game is ridiculous, especially this early in the season. There’s a mentality now, even in August and September, that you have to win every game and be in the top half or the top five for the whole year. We’ve been accustomed not just as players but as a whole club to winning. We’ve lost something like 10 league matches in over two years which is an incredible run. But we’ve come into a new division, we’ve had plenty injured and new people coming in. We could have had two more wins in that drawing sequence. The players confidence is still high and we know we’re only a few wins from changing the league table. The crowd were excellent on Tuesday and I’m sure they can get behind us again in that manner on Saturday.”

McMahon also reflected on the lack of a clear leader in the division at this time, with odd results happening week in, week out. “This league is so open,” he said. “Every time a game finishes on a Saturday or a Tuesday night, you see funny results. One minute Leyton Orient are rocking and rolling and the next they get beaten 3-0 at home to Halifax. Everyone’s beating everyone, so it’s about us climbing the table and doing some of that.

“It’s about us sticking together and putting a couple of wins on the board and that changes the complexion of everything. The higher you are in the league, it obviously becomes easier to look at and our current position makes for worse reading on paper. Ten games in, the league hasn’t settled down, there are still too many good sides that are not near the top that will be come the end of it. And I’ll be amazed if Tranmere aren’t in that top one or two by the end of it all.”

Fleet’s list of injured is reducing all the time with McMahon hoping to call on a fully fit squad bar Sean Shields who pulled a stomach muscle last weekend and long-term casualties Bradley Bubb and Dave Winfield. Bubb is making progress, with light ball work and speed exercises but McMahon doesn’t anticipate him to be ready until late October at the earliest and more likely November, when he’ll also need a loan period to get up to the expected levels.

Tranmere are sweating on the fitness of former Scotland international and Blackburn and Derby County defender Jay McEveley, who signed for them in the summer from Ross County. Jay Harris also missed out in midfield recently while striker Andy Mangan has sat out games as well. Ben Tollitt, Jake Kirby and James Wallace are definitely out.

Mellon’s side have received plenty of criticism for their recent form, especially after losing at Maidenhead in midweek, and at home to Dover earlier this month, and they will be desperate to gain three points at Stonebridge Road to kick-start their campaign.

Mellon, who won promotion from this level with Fleetwood and also from League Two with Shrewsbury, said: “We have to try and get consistency, which can be very frustrating. But I’m absolutely sure it will turn. Football is about making and taking chances. We’re doing OK at one end, but we should have been more clinical at times and it could have changed a lot of games. In the final third, we need to show more quality and composure.”

It’s a frustration that McMahon’s Ebbsfleet side also share at this time but which side will prove the more clinical? Find out in one of the most eagerly anticipated league clashes at Stonebridge Road for some time at 3.00pm tomorrow.

• The game is segregated and Tranmere fans will have the Swanscombe End. All fans (including away fans) may now purchase tickets on the day (and NOT as originally advertised to away fans on a ticket-only basis). Please note away fans must buy any tickets on the day at the away turnstiles which are clearly signposted.

• The George & Dragon pub in Swanscombe has extended an invitation to Tranmere fans ahead of Saturday if they wish to enjoy a pre-match beer.

• Supporters are urged to use the parking facilities at Ebbsfleet International Car Park C, which is a short walk from the stadium. The cost is £3. Thames Way is a designated Clear Way and cars are liable to be ticketed. Please also note that there will be no parking at Ebbsfleet Business Park from this week as secure gates have been installed at the entrance. Parking in front of the gates is also prohibited as access is required at all times.

Ed Miller has been Ebbsfleet United's communications manager and programme editor since 2014 and responsible for the club website since 2007. Contact him on ed.miller@eufc.co.uk
PrevPreviousCryotherapy helps Fleet players back to fitness
NextFleet 0-0 Tranmere RoversNext