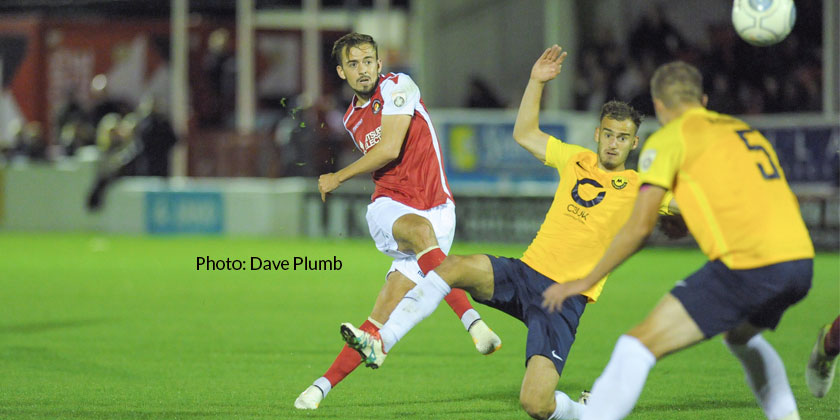 Torquay has familiar ring of history about it for Fleet fans

“Torquay” resonates with every Fleet fan who was at Wembley almost exactly 10 years ago as this club wrote its name into the history books… and now there’s every chance the seaside town could be remembered by a whole new generation of Ebbsfleet United supporters for an entirely different reason.

There’s plenty riding on this first visit to Plainmoor since 2008. Daryl McMahon could lead Fleet to the highest league position in our history, a win would achieve the highest ever points haul at this level and there’s the small matter of potentially achieving the first ever qualification for the National League play-offs by this football club.

A point, of course, will guarantee Fleet at least a top seven finish and a play-off game next week; all three would guarantee McMahon’s men a fourth-place finish and a home tie this coming Thursday. Fleet are potentially four wins from the Football League and that’s a whole new world for the supporters of this club.

Of course, that’s a long way away still: both manager and players never looked beyond their next game during last season’s promotion campaign and they’re experienced enough not to do so again this time around.

This season recalls the last and only time the club finished fifth, in 1979/80, when the Fleet were steady in ninth place for much of the campaign before grabbing fifth spot in the last two or three games.

“We’ve still got a bit to do,” McMahon said. “I don’t get carried away. We’ve still got a tough game at Torquay and it’s their last game of the season after being relegated so I’m sure it won’t be easy. We’ve played without inhibitions, we did so against Gateshead. We went out on the front foot, passed the ball, dominated the ball and we’ll try and do that again. It’s not always easy to play as well as we have but we’ll be trying.”

The permutations are myriad and Fleet fans will be as glued to live-score apps as they will to the action at Plainmoor this Saturday. A win or a draw make the maths easy enough, but even a defeat might still keep the Fleet in seventh if either AFC Fylde or Boreham Wood were to lose and one of Bromley or Dover failed to win.

But that action all happens elsewhere and the Fleet squad will be focused only on the task in hand. Destiny is theirs to write and with 150+ coach travellers and many, many more making their way to Torquay independently to back the players, belief in the visiting camp is strong.

Anyone who witnessed the second-half demolition of a durable Gateshead side on Tuesday will have been impressed by the backbone in the Fleet squad and the carefree way in which they went about their task despite twice being pegged back by the home team. That’s the application that will be required against a Torquay club making its swansong at National League level.

There will likely be little shakeup amongst the Fleet squad given the numbers available to McMahon but a settled lineup has certainly paid dividends in recent weeks with just one defeat in 13 matches.

Torquay, by contrast, suffered a 4-3 home reverse to a Guiseley side who played with 10 men for most of Tuesday night’s encounter, their 24th defeat of the season. Yet Fleet can’t be too complacent despite the negativity surrounding the Gulls at present. There was belief for a time that manager Gary Owers could pull the club out of the mire and they’ve only lost three of their last nine games, with wins over Leyton Orient and FC Halifax Town just two decent results in recent weeks. And McMahon will know better than anyone that the Gulls still have plenty of bite, given that they were surprise 1-0 victors at the Kuflink Stadium back in October. They are, in fact, the only side in the division that could possibly achieve a double against the Fleet this season.

Their goalscorer that evening, Jamie Reid, is one of several lively front players that Fleet will need to keep quiet which also includes former Eastbourne and Dagenham striker Elliot Romain as well as on-loan Cardiff forward Rhys Healey, who (like Danny Kedwell) struck a hat-trick on Tuesday night.

Torquay need to get over their “shambolic night of shame” as Tuesday has been termed in certain quarters and manager Owers pulled no punches. “If we play like we did tonight against Ebbsfleet, it will be even worse,” he said, confirming that he would not quit and sending out a message that players were on their way out the door in the summer. Whether that demotivates or otherwise will be clear in front of a disgruntled home contingent on Saturday but it makes Torquay unpredictable and the Fleet will need to mind there’s no sting in the tail before the Gulls descend to their lowest level since joining the Football League 91 years ago with National League South their destination.

Just 1,007 fans turned up at Plainmoor on Tuesday night, the lowest crowd by some distance this season, and the only thing stopping a similarly dismal crowd is likely to be the influx of hopeful Fleet fans. Torquay are unlikely to be much-changed from the side that won in Kent back in October, with the most notable absentee being striker Rhys Murphy who moved on to Gillingham in January.

Torquay as a town may well wonder what’s hit it when upwards of 400 Fleet fans undertake the long journey south-west with many making a weekend of it and already in place in hotels and caravans parks around the Devon coast. It’s all gearing up to be a weekend that will be remembered for a long time at this club but as ever it will all rest on what happens once the whistle goes at the earlier-than-usual time of 12.30.

It’s one not to be missed and, once more at the business end of a season as far as this football club is concerned, neither is it one for the faint-hearted!

Ed Miller has been Ebbsfleet United's communications manager and programme editor since 2014 and responsible for the club website since 2007. Contact him on ed.miller@eufc.co.uk
PrevPreviousMcMahon: “A performance was all I wanted”
NextTorquay United 1-1 FleetNext