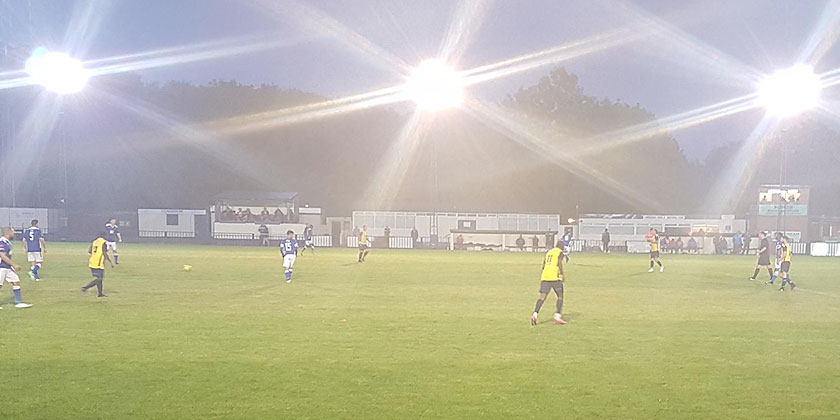 With unseasonal floods beneath the floodlights, Fleet touched down back on sodden English soil only to fall to a late defeat against a slick Tonbridge side. Two goals behind going into the last half-hour, Fleet looked like they might snatch a draw or even the win their second-half performance might have deserved but it was the home team who claimed the spoils.

With two of the new signings in the starting line-up, Fleet also named trialist defender Matthew Hall on the bench, the 20-year-old having played for Watford and Ross County in his youth. Neither of the trialists who turned out against Shrewsbury Town were involved.

The visitors started well and Anthony Cook was particularly lively, going close with a rising shot that James Behan nudged over the bar. But the game soon became bogged down and former Fleet youth and Dover midfielder Chris Kinnear was particularly effective in breaking up play.

Fleet strung together some decent moves in the final third, but Aaron McLean just couldn’t tuck away a shot as the goal opened up for him and Andy Drury’s soft shot deflected off Danny Kedwell to bounce just wide of the post.

Fleet’s best move came on 20 minutes when Drury dropped an inch-perfect pass into midfield, McLean quickly spread play wide to Cook and the wide man advanced and fired on target only to see Behan once again get a touch to send it over the bar. Moments later Sean Shields’ deft first touch allowed him to bring the ball down and fizz a shot goalwards but that too just failed to register on target.

Tonbridge then went ahead against the run of play on 29 minutes when a long throw caught out the Fleet defence who failed to clear and Andre McCollinn was on hand to steer a shot away from Jonathan Miles. From that point the weather worsened further with torrential rain not helping the spectacle and the two teams played out a rather lifeless last 15 minutes.

The expected deluge of subs didn’t happen as the second-half kicked off but it wasn’t long before they arrived, with six players introduced on 57 minutes. The impact wasn’t as intended as Tonbridge extended their lead a minute later with a very well taken goal. Their unnamed trialist, who was certainly fighting hard for a contract all game, did his chances no harm with an excellent strike somewhat out of the blue.

Fleet upped the tempo and the substitutes certainly made a difference. Myles Weston caught the eye as he played across both flanks and through the middle at various times, linking up well with Darren McQueen. Jack Powell and Jack Connors were also very involved as the visitors began to dominate possession.

They were rewarded on 61 minutes when McQueen showed few signs that his development had hit a wall over the close season, creating space for a shot from 25 yards and curling an excellent effort around Behan and into the top corner.

How the referee didn’t award a penalty three minutes later was a mystery. Dave Winfield, still lurking on the edge of the box from a previous attack, found a pass threaded through to him and he was 12 yards out when a Tonbridge defender came sliding in and all but picked the ball up with two hands before scooping it out of danger with a trailing arm.

Weston and McQueen continued to link up well and a wonderful exchange of passes between the two saw the latter in on goal only for full back Liam Smith to make a fantastic intervention to deny McQueen. Then on 75 minutes, Fleet got the equaliser they deserved. Drury on the left threaded a pass beyond the defence and on to the feet of Connors whose low cross was right on Kedwell’s toes and the No.9 planted a shot out of Behan’s reach for 2-2.

It looked like the friendly was Fleet’s for the taking but five minutes from the end, Tonbridge broke upfield and Alex Akrofi’s shot was bravely blocked by Kenny Clark only to spin clear to Dan Thompson at the far post and he had most of the goal to aim at as he headed home from close range.

Ed Miller has been Ebbsfleet United's communications manager and programme editor since 2014 and responsible for the club website since 2007. Contact him on ed.miller@eufc.co.uk
PrevPreviousFrom Algarve to Angels…
NextMacca plays a cool hand to land LukeNext