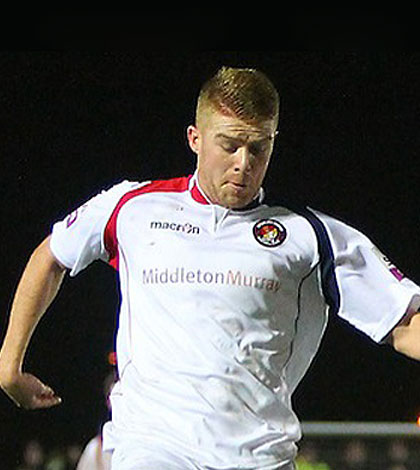 A goal either side of half-time saw Fleet ease to victory at Kent neighbours Tonbridge and put themselves back in contention for the title race – albeit with Eastleigh in pole position.

A thoroughly professional performance against a Tonbridge side that barely mustered a shot on goal saw Fleet record their fifth clean sheet in six games to move to within six points of leaders Bromley – a gap that had at one stage been 16 points.

Reluctant to tinker with a starting line-up that has been producing the goods of late, Steve Brown named an unchanged side once again against Tommy Warrilow’s Angels whose last win at Longmead came against title-chasing Eastleigh.

The visitors started well, with Anthony Cook’s energy driving things down the left flank as the Tonbridge defence backed off his every surge into the final third. With Fleet pinging the ball around well just in front of the Angels back line, the first chance of note arrived on eight minutes, Michael West combining with Alex Osborn who slung a ball wide to Cook and his first-time shot was well gathered by goalkeeper Lewis Carey.

Tonbridge weren’t entirely on the back foot and ex-Fleet loanee Luis Cumbers played in Henry Muggeridge who forced a corner but the visitors always looked the more threatening side. On 12 minutes, the irrepressible Cook was at it again, leaping onto a defensive lapse to angle a shot over Carey that cannoned back off the crossbar. And the Fleet winger was still enjoying the freedom of Longmead’s left flank four minutes later when he sprinted between two Tonbridge defenders and planted a cross into the six-yard box. Billy Bricknell met it well with his head but Carey in the Tonbridge goal pulled off an amazing instinct save with one arm to deny Fleet an almost certain goal.

But after that enjoyable opening spell, Tonbridge managed to play further up the field and Fleet’s early attacking verve faded, with the game entering a lull. Chris Piper briefly threatened the Fleet back line just before half-time but it proved a false dawn for Tonbridge as they were behind within 60 seconds. It was Cook again who put the chance on a plate, tormenting his full back before seeing a shot parried wide by Carey – but this time there was no let off for the Angels goalkeeper as Osborn was perfectly placed to polish off the rebound and give Fleet the advantage they needed.

With the goal having settled them, Fleet’s second-half performance was solid and competent. Daryl McMahon led the way with a shot that cleared the crossbar on 47 minutes but the game settled into the familiar lull of the first half once again, Fleet happy to sit on their lead against a side who had little to offer going forwards.

Not that the visitors weren’t keen to double the lead and they did just that on the hour mark. Cook’s corner to the far post was headed back across his own goal instead of away by Gary Elphick and in came Rance to plant his second headed goal in three games into the back of the net.

Fleet lost Anthony Acheampong to injury straight after that, with Yado Mambo filling in and, with nothing lost in terms of size in the visiting defence, Tonbridge still found themselves hitting a wall. They did have vociferous shouts for a penalty waved away by the referee when Sonny Miles fell in the box but came no closer than that.

McMahon then whistled a free-kick over the bar on 69 minutes but Fleet were happy to knock it about in midfield for the most part. Aiden Palmer and substitute Michael Thalassitis combined well shortly before full-time but the ball ran long while at the other end Muggeridge finally registered a shot on target for the Angels, while ex-Fleet striker Nathaniel Pinney saw another effort almost wrong-foot Edwards as it deflected off a defender.

But in truth, Fleet were home and dry and had looked that way from the half-time whistle. On this evidence, they should relish their next home tie – against the same opposition – on March 29. Before that, however, is a visit to Steve King’s Whitehawk side on Saturday.

Ed Miller has been Ebbsfleet United's communications manager and programme editor since 2014 and responsible for the club website since 2007. Contact him on ed.miller@eufc.co.uk
PrevPreviousMaking waves to Whitehawk
NextPreview: White-hot Fleet head to WhitehawkNext