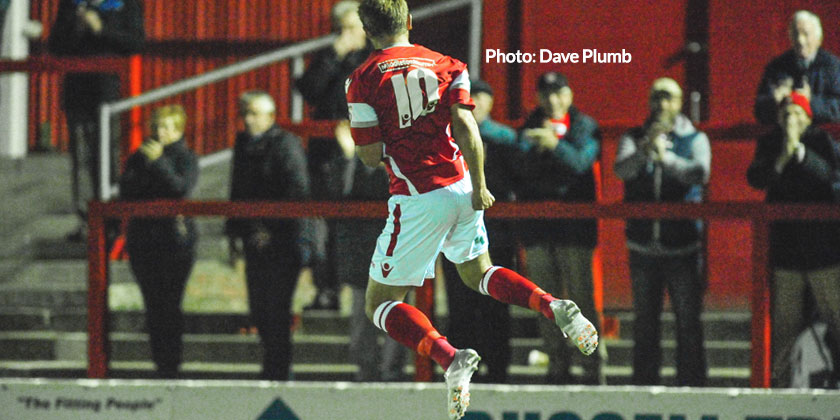 Daryl McMahon heads into Saturday’s big Kent derby at Stonebridge Road with the message to his players to just “keep doing what they’ve been doing best.”

Suggestions that the midweek defeat in the FA Cup to Chelmsford, Fleet’s first in 13 games this season, might leave his players needing a pick-me-up ahead of the Maidstone clash were laughed off by the Fleet boss. “We got beat but we did so playing really well, it was just one of those nights. It’s not like we’ve been terrible. We’ve got 10 wins and a draw in the league, there’s no need for me to pick these boys up, they’re confident and they just need to do what they’ve been doing since August.”

McMahon knows the improving Stones carry a threat, particularly with their form in recent matches which has seen them concede just one goal in their last five league outings, but he maintains that they were just as difficult to beat in August and that his side will need to match that performance to come through again this weekend. “We had to roll our sleeves up at the Gallagher then, they were a very good side, and we’ll have to do it again. It wasn’t like we just turned up and rolled them over in the first game, we had to fight for it.”

Danny Haynes and Michael West were due back in training after sitting out Tuesday’s FA Cup tie and there were no reports of further doubts in the Fleet camp ahead of Saturday.

Jordan Parkes, who opened his Fleet account with two goals at the Gallagher Stadium back in August, told FleetOnline for his programme interview this week that his goals in each of the three Kent derbies are the highlight of his career in a red shirt so far and he wants to keep that record up by notching another against the Stones this weekend.

Fleet’s goals-for column is a lot healthier than their opponents with the 22 goals scored by McMahon’s team more than double the Stones’ 10. But the visitors’ defence, with former Fleet player Jamie Coyle likely to start, has let in only six, so – like in the last two games – Fleet are going to find it difficult to break down.

Jay Saunders’ side will, of course, be without Alex Osborn who joined on loan from the Fleet last week. Their line-up will likely be full of familiar faces, however, with Adam Birchall having bolstered the front line after singing on loan from Bromley. Striker Jay May was also at Bromley for a spell and midfielder James Rogers was part of the Dover squad that pipped Fleet to promotion in 2013/14.

The Stones have also welcomed back Alex Flisher after a long lay-off with a knee injury and his long throw is a potent weapon in the visitors’ armoury.

It will be Maidstone’s first visit in the league to Stonebridge Road for 33 years, when a 2-2 draw in April 1982 didn’t prove quite enough for the Fleet, who were relegated from the Alliance Premier League a fortnight later. There have been a couple of Kent Senior Cup games since, most notably the 2-1 semi-final victory over the then-Football League Stones in 1991, but either way this has been a derby in waiting for a generation or more.

And with the two sides in the positions they are in, it couldn’t be any more finely balanced for neutrals and partisans alike.

Ed Miller has been Ebbsfleet United's communications manager and programme editor since 2014 and responsible for the club website since 2007. Contact him on ed.miller@eufc.co.uk
PrevPreviousYouth section benefits from donation
Next‘A collective achievement’ as Macca bags managerial awardNext