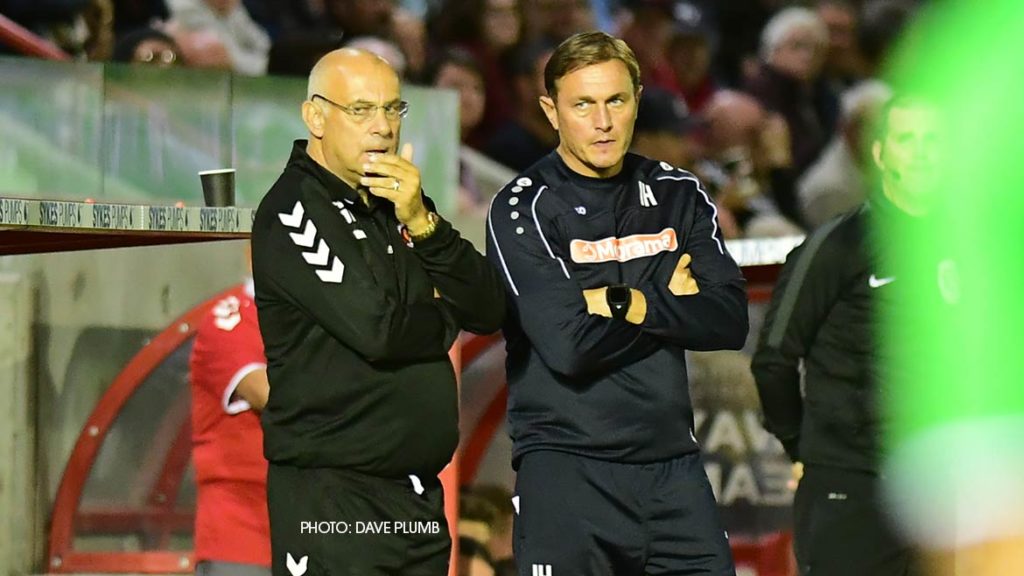 “There’s no Wednesday off here”

Garry Hill will have his players back in training on Wednesday morning as he remains determined to iron out his squad’s problems and get Fleet’s season firing.

The Ebbsfleet boss watched his side’s good start fall by the wayside after the first goal and he says there’s no room in Fleet’s battle for days off.

“Everyone’s in tomorrow morning,” Hill told BBC Radio Kent’s Charles Webster. “We’ve got to put it right as soon as possible. I’ve installed a lot of the players, I do believe they’re good players and that results will turn round but it’s not the start we wanted.

“I don’t have pleasure coming out here after the game and talking about a disappointing result or defending, but by the same token players can’t be thinking they’re getting days off with a situation where we are. That’s all gone. Most clubs there’s a Wednesday off, there’s no Wednesday off here. We’ve got some serious work to do. You don’t dwell on it for another 24 hours, we’ve got to get in here and clear our heads.

“It’s easy to turn round and make excuses or throw the towel in a little bit but that can’t happen. If we have to do the extra hours and not have a day off to get it right, we’ve got to do it. We have to look at formations, we have to look at personnel and you learn a great deal about people on and off the pitch.”

Hill felt his side were the more likely to score in the opening 25 minutes before Rhys Murphy’s opener but the giving away of cheap goals is proving increasingly costly.

“We started off quite positive,” he said. “I think we carried on from the performance on Saturday and I thought truthfully it was only going to be a matter of time before we found ourselves in front. We were getting a lot of good balls around Josh Umerah. He’s not 100% fit at the moment but I think you see his strength, his movement looked very good. Good balls were going into the penalty area and you were just hoping you’d get on the end of one.

“With their first real attack they’ve scored. The players thought it was a foul, but the ball’s travelled a long way and I thought we looked very deep. It was a cheap goal as far as I’m concerned. You come in at half-time and set your stall out for the second-half hoping you’ll go out there, clear your heads, get at them and get the crowd on your side. In two minutes we’ve got done straight away by a cheap goal. We’re conceding cheap goals at the moment and that don’t tell lies.

“We worked hard to get back at 2-1 and we got a free-kick. We should be punishing them with a ball into their box of quality. [But it was] a poor ball, we’ve got stretched and it’s 3-1. I look at their three goals tonight and no disrespect to them but I don’t think they’ve had to work for them. We’re not defending and taking responsibility enough. It’s costing us dear.”

Confidence is another issue for the boss, with his defence being breached too easily, giving the team a mountain to climb to get back into games.

“The biggest problem is a certain lack of confidence,” said Hill. “Getting one in front is certainly a lot more of a boost than being one behind. Twenty minutes in tonight, everyone might have been looking at it, we’re bright, we’re trying to play at the right tempo, then all of a sudden they score out of nothing. They’ve not had to work for that goal. This league’s unforgiving, it doesn’t matter who you are. If you don’t defend properly, you’re going to get punished.

“Yeovil have punished us proper but I thought when we got to 2-1 that the last 10 or 12 minutes were set up for a grandstand finish to possibly get a draw if not go on and win it but the discipline and the responsibility, where we miscue a free-kick and have got everyone upfield, we’ve got punished. They’re basically saying ask us a question, if you don’t and you give the ball away, we’ll punish you again and they’ve done that.”

And Hill’s not looking for excuses as Fleet sit at the foot of the table, albeit early on in the campaign.

“I understand players have to settle into football clubs and there’s a lot of new signings and a lot of good players,” he said. “But we have to stand up and be counted even though it’s very early in the season… but then six games are gone, 12 games are gone and you find yourself in a battle for the season. As much as we huffed and puffed, their goalkeeper hasn’t had enough to do. Aswad Thomas has scored again tonight. You’re talking about your left-back being the top scorer.

“It’s only four games in, yes, but the manner of the goals we’re conceding at the moment is very disappointing. Solihull got six away at Chorley tonight and the games don’t get easier. I honestly believed we would get a result tonight but [there’s been] individual errors or lack of responsibility in areas of the field where you can’t let goals in like we’ve let in. After four games, we’ve let 11 goals in.”

The manager knows the fans are hurting as much as he is by the team’s current predicament but with Solihull Moors up next, Hill is hoping the supporters stick with their side as much as they did on Tuesday night.

“I thought the supporters were trying to give the boys a lift,” he said. “They were encouraging at the end and clapped the players. You can’t knock that. They know it’s a new squad that’s coming together but we’re judged on our league position and having no points on the board, you can’t be looking for any excuses.

“I’m hurting. We’ve all got to hurt together, it’s the only way we’ll turn it round. It’s not the start we wanted or expected but we’ve got to keep going.”

Ed Miller has been Ebbsfleet United's communications manager and programme editor since 2014 and responsible for the club website since 2007. Contact him on ed.miller@eufc.co.uk
PrevPreviousFleet 1-3 Yeovil Town
NextZero tolerance on off-field incidentsNext