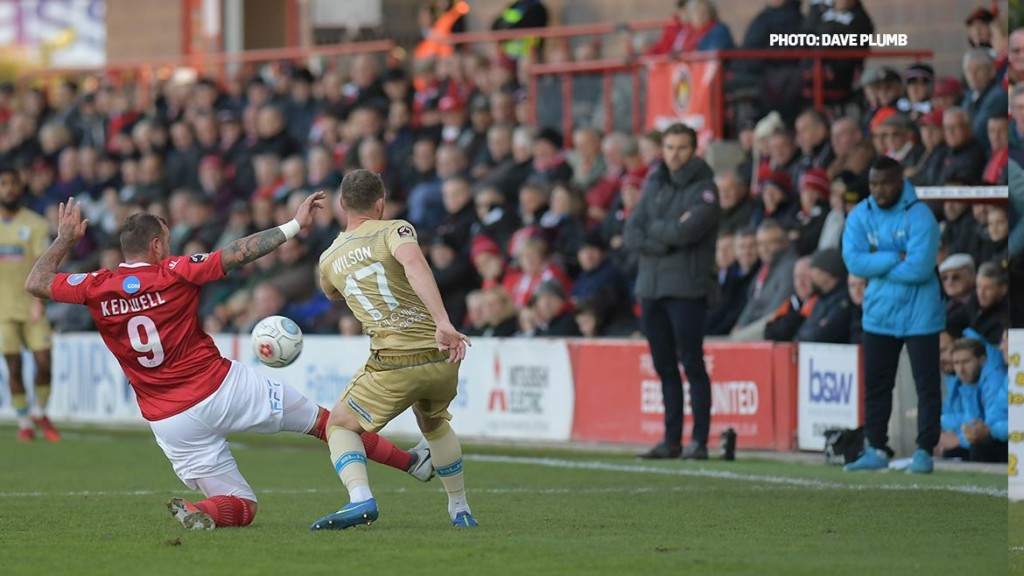 “The way we won showed commitment”

Daryl McMahon spoke of the “monkey off his back” as Fleet held on to record their second home win in the league. The 1-0 victory over Barrow was Fleet’s fourth match unbeaten and also the fourth game in succession in which they’ve taken the lead – stats the manager would have bitten your hand off for only a few weeks ago.

And while Fleet had to withstand plenty of Barrow pressure, the ugly win characterised the home side’s spirit – a fact that wasn’t lost on McMahon.

“The way [we won] shows a commitment,” he told BBC Radio Kent’s Charles Webster. “The will from everyone to keep the ball out of the box, out of the goal. We are [making progress]. It was a whole-hearted performance, a committed performance. We’ve always been committed to the football club, it’s a great football club, everybody’s here for the right reasons to progress the club as high as we can.

“It was what we needed. The clean sheet was massive as well. Probably unlucky not to have another goal and a penalty but glad to get the three points. Barrow were a good side, they played some good football. I thought Ashmore was outstanding today. I said to the lads in there the performance reminded a lot of Solihull at home in January last season where you needed to get that win and they got the win.”

There were times in the 90 minutes when Fleet might not have been at their best but for McMahon, the result overrode the performance in a reversal of many of Fleet’s home matches this season.

“You want that so badly and that’s why we probably defended a bit too deep in the second-half,” said the manager. “Because you’re just desperate to keep that clean sheet and desperate to win and hopefully now we can build on that. I think it’s a monkey off your back when you get that win. We’ve played far better here against sides… Chesterfield, Sutton, Bromley and didn’t win. Sometimes you’ve got to win ugly and we won ugly today.”

And the boss praised the home fans who have stuck with the club in lean times on and off the pitch in recent weeks.

“They were immense again, the fans have been terrific,” McMahon said. “They were noisy as you like all game today. I think they enjoyed the last bit at the end as well when Nathan came and caught it – it was like a goal we scored!”

McMahon has had to dodge questions about off-the-field issues for the past few weeks and he was glad that his side’s football did the talking.

Ed Miller has been Ebbsfleet United's communications manager and programme editor since 2014 and responsible for the club website since 2007. Contact him on ed.miller@eufc.co.uk
PrevPreviousFleet 1-0 Barrow
NextDanny dumbfounded by disallowed goalNext