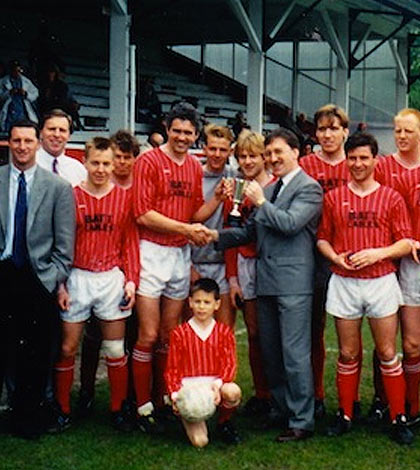 The ups and downs of promotion

Now approaching the climax of nine months of football, the Fleet are in a promotion race once more – much more pleasant than last season’s (or any season’s!) relegation struggle. A look back at previous promotion campaigns in our 68-year existence offers us some encouragement as we seem to succeed in our attempts more often than fail. That said, of course, these days it is not just sufficient to finish in a promotion slot because the hard stuff now starts with a virtual four-team knockout competition.

It might surprise younger supporters how long it took Fleet to actually be involved in a promotion battle – we were in our silver jubilee season of 1970/71 before we were involved in such a bid. That was for two relatively simple reasons: the first period of our existence between 1946 and 1958 was spent in a single division (the Southern League) and then, when it was split into two divisions, after comfortably qualifying for the top division we were generally looking at the bottom rather than top of the division – with inevitable relegation out of the top flight in 1963.

After seven modest seasons in which we rarely climbed above the halfway mark, our first concerted bid to regain Premier Division came in 1970/71. The season did not start very well with our first win coming in our fifth game and although matters gradually improved we were still no more than also runs as 1971 began.

Then everything clicked with 17 goals in five straight wins elevating us to the fringe of the title race. By this stage Guildford City were clear at the top but with four promotion spots available, our first promotion began to look realistic. Going into the last month of the season, Guildford were  followed by Merthyr, Rugby, Folkestone, Burton and the Fleet. A run of nine unbeaten games including difficult goalless away draws at rivals Rugby and Folkestone meant full points in our last two home games would see us promoted. A thrilling 4-3 win over eventual runners-up Merthyr was the first stage and then Tonbridge were trounced 4-0 to leave Fleet in third place with a record of:
P38  W19  D10  L9   F74   A42  PTS 67

The stars of Alf Ackerman’s side were inspirational captain Alan Lillis at centre half and top scorer Alan Jones with 16 league goals. Fleet legend Tony Sitford played a strong part too as did goalie Brian Hughes while not forgetting a certain Roy Hodgson in midfield. Sadly the heart of the team were lured to Maidstone for better money in the close season and the club were back in the lower division of the Southern League after a single season.

Tony Sitford took over from Alf Ackerman early in 1974 and by the start of his first full season in charge – the 1974/75 season – he had a formidable side assembled that steamrollered the opposition. Fleet didn’t lose a league game until Match 19 and only lost two all season, ensuring there were few nerves for fans with Mickey Angel, Colin Norman and Brian Woolfe sharing out the goals with Kenny Pearce, Ken Burrett and goalkeeper John Cowan preventing them at the other end.
P38   W24   D12   L2    F70   A30  PTS 84 – finished eight points clear of Hillingdon B

Having been selected for the newly formed Alliance Premier League on the results of the two previous seasons in 1979, it would take two relegations – from the APL in 1982 and Southern League Premier in 1986 – before we began another upward climb.

After two seasons under Eddie Presland which saw us in the top six but never looking like finishing in the two promotion places, the 1988/89 season saw his assistant manager Dennis Moore step up to the plate after Presland left. Moore kept Fleet in the mix all season, chasing eventual champions Chelmsford City, who finished right points clear.

Bury Town and Witney Town were our main rivals for the other promotion place and whilst our form was unconvincing towards the end of the season our rivals fared even worse. Despite losing our last two games, promotion was secured with four points advantage on third place Bury (pictured above). Our final tally was:
P42   W27    D6     L9      F70    A40     PTS 87

By the 1992/93 season we were again back in the lower division but with new signing Steve Portway scoring goals galore promotion looked a strong possibility coming into February. But following a shock 3-0 reverse at fellow title chasers Salisbury everything went pear-shaped with just one win in nine games allowing Sittingbourne to take the title, pushing Fleet 11 points further down in fourth place. So despite an amazing 52 league goals from Portway, the record for that season showed far too many games lost rather than turned into draws.
P42   W 25    D 4    L13    F99     A63   PTS 79

The following season saw the lesson well learned, with most of the same side romping to the title under skipper Tommy Warrilow, with Portway again scoring heavily with 37 (compared to second top scorer Micky Cotter’s nine). Simon Ullathorne had been a livewire down both flanks while Matt Gubbins, Lee Turner and Ian Gibbs all played key roles under manager Gary Aldous.
P42   W27     D11    L4     F87    A24   PTS 92

After three mid-table seasons in the Southern League Premier came the  shock decision to leave the Southern for the Isthmian/Ryman League in 1997. There were two main reasons for this, to cut down on the travelling and because it offered a perceived ‘easier’ route back to what was now the Conference.

Although the first part of the theory was unquestionably correct, the latter was open to conjecture, particularly in the first couple of seasons when manager Andy Ford was finding his feet and getting plenty of criticism. Gradually performances improved and the 2001/02 season saw us setting the pace along with Canvey Island, the much-fancied Aldershot left trailing in our wake.

When Canvey won a vital tussle at the end of March at a packed Stonebridge Road by the only goal, the Essex side appeared to have a vital advantage with only one promotion slot for the champions.

But on the home run Canvey stuttered and Fleet eased to the top. Despite frustrating home goalless draws with Purfleet and Basingstoke, and a reverse at home to Boreham Wood, our rivals fared no better. Victories at Braintree and Bedford secured the spoils and a return to the Conference after 20 years – four points clear of Canvey and a massive 26 ahead of third-placed Aldershot. The impressive record was:
P42    W31     D6       L5        F90      A33     PTS 99

An eight-season run-in the Conference came to an end in 2009/10 but under Liam Daish the team were determined to bounce back and although Braintree took a firm grip on the Conference South from early on, Fleet were always comfortably placed for the play offs finishing behind runners-up Farnborough and in front of Chelmsford and Woking. Michael West would then have his finest spell in a Fleet shirt, scoring twice in the 4-1 and 2-1 wins over Chelmsford and again in the 4-2 play off final victory at Farnborough. Our league record was:
P42    W22     D12    L8      F75      A51     PTS78

Several now established figures were in their debut season, notably Paul Lorraine and Preston Edwards, while Calum Willock’s 17-goal contribution was vital as was the midfield work of Ram Marwa.

Now comes the crunch and hopefully the team of 2013/14 will be as successful as most of those above in achieving their promotion aim.