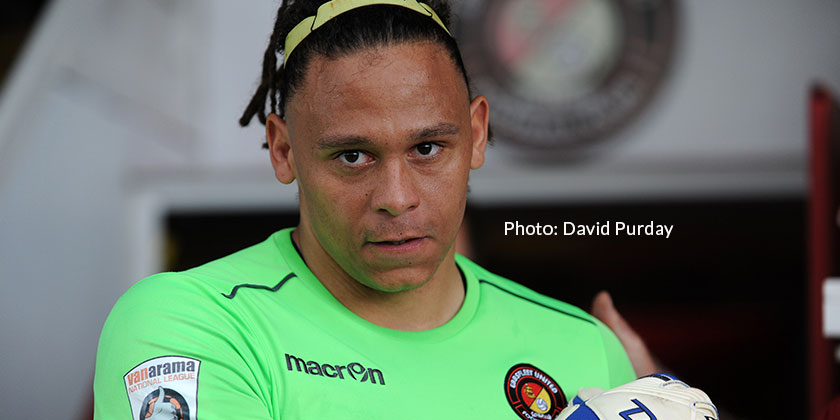 The only Fleet player to feature in every minute of every league game this season has said the post-match celebrations will never leave him as he reflected on clinching promotion last Saturday.

Goalkeeper Nathan Ashmore made his 63rd appearance for the club in the victory over Chelmsford City and he told Charles Webster how incredible it felt.

“I was ecstatic, it’s amazing,” said Ashmore, who was cheered on by family, friends and former teammates in the crowd. “It’s just an unbelievable feeling, I’m so glad that we did it together as a club, as a team. There were special moments with the crowd [after the game]. Honestly, the memories will never go from me. That one moment was unbelievable. That will stay in my heart for the rest of my life and the club will as well. I love the fans and winning Saturday is something to give back to the fans as well.”

The former Gosport keeper was adamant that his side deserved it across the 90 minutes and, more importantly, across the season. “I came to this club to get promoted,” he said. “I think we’ve played absolutely outstanding football. You hear it in football all the time, a team deserved to go up, but I tell you what, we did deserve to go up this year. Not to lose a game in the calendar year is unbelievable and we were 11 points behind when we played Dartford and lost there. To pull that gap down to the last weekend of games has been unbelievable.”

Having conceded just 12 league goals in 2017, and only on one of those occasions let in more than one, Ashmore was humble in accepting the praise.

“I haven’t been called upon as much [in 2017] but when I have been, I’ve been there and that’s my job. That’s what I love doing and that’s what I was brought here to do. As a keeper you’re a lone solider out there but I love the thrill, I love the challenge and to keep my concentration, that’s me all day long.”

Now the crowd favourite, runner-up in the player of the year vote, can’t wait to get started in the National League and he’s fully prepared for what to expect. “Bigger crowds to wind up, more crowds to bring pineapples for my hair so it’s all right!” he joked. “I’m happy and ready for the challenge.”

Ed Miller has been Ebbsfleet United's communications manager and programme editor since 2014 and responsible for the club website since 2007. Contact him on ed.miller@eufc.co.uk
PrevPrevious“It’s going to be a busy few months” – Macca
NextChris Pilkinton’s funeral detailsNext