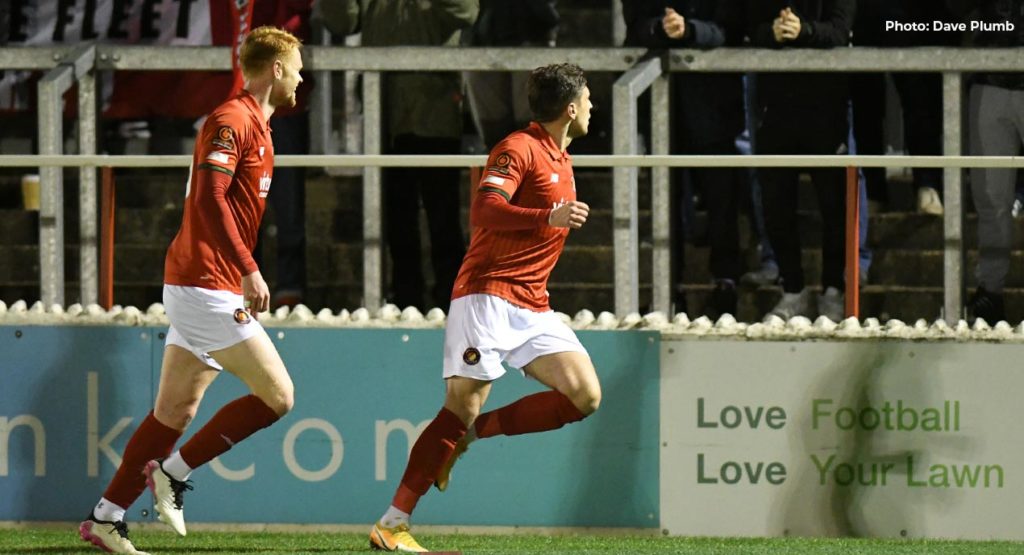 The fine lines of finishing

He said it after the Dartford defeat and Fleet manager Dennis Kutrieb reiterated it after he saw his side put five past St Albans City – finish properly and win your games.

The Fleet boss has been impressed with St Albans, both this season and last, and he conceded that they looked a little tired, but insisted that shouldn’t take anything away from the Fleet performance.

“We expected a very tight game because it’s a very good opponent,” said Kutrieb. “Fortunately for us they played three days ago and you could see they were a little bit tired, it’s a tough game at Havant for 90 minutes and work hard to get a 1-0 win. I can understand it because it was exactly the same lineup, they didn’t make any changes from three days ago. We had a good day, they had a bad day but now we need to make sure we get a few wins on the bounce.

“[They are] a strong attacking side so if you see Shaun Jeffers, if he has half a chance he scores goal. Mitchell Weiss is a great player, both wingers are good players so they have a good team and they will definitely be in the mix for the play-offs. I would be very surprised if they are not in the play-offs at the end of the season.”

While St Albans made no changes to their side, Kutrieb was pleased to hand two debuts to his latest signings while having sympathy for the likes of Alfie Egan who was an unused substitute on the night.

“Sometimes it’s tough to make decisions,” said the Fleet boss. “When you see Alfie Egan was sitting on the bench waiting to see if he can get a few minutes or not, and he played a great game here a few weeks ago against Hampton. But it is what it is, I always felt we can make those changes because the boys know what we want to do on the pitch. That’s the reason why we can make these changes if someone is a little bit tired.

“Like Christian N’Guessan, we took him off after 60 minutes because we could see he’s a little bit tired. We never want to make risks but still get it wrong sometimes like with Joe Martin against Dartford or Greg Cundle who got injured against Dartford. We can’t foresee everything but of course we try to find good solutions.

“I’m really proud today – new scoreboard, new sausage rolls in the stadium! You can see we make step by step [progress] and we want to make the same steps on the pitch. It’s not all about just on the pitch, it’s all the other things as well. Even the signing of Louie Moulden is another thing, I’m really proud that we can get a Premier League keeper. That’s all little small things where I think we’re in a good way but we need to make sure we do the same on the pitch and I was really impressed because the boys delivered a great performance.”

Fleet have the second best home form in the league but even with a couple of defeats on the road in the past weeks, the boss insists that with the right mindset and approach, then his side can put those results behind them.

“For me I would say it was more a bad spell for results. I can’t really say it was a bad spell [in terms of] performances because we played a good game at Dartford. It’s hard to judge when you get a tough defeat at Dorking, then play three days later at Maidstone which is another strong side and concede a penalty after one minute. It’s football and it’s mindset and mentality as well. I’m always on the side of my players and would never blame them but we need to make sure we do the same on Saturday and then we play a tough game at Havant. If we think like, oh, we can turn up on Saturday and just get another win, definitely not. We need to work at least with the same intensity we did today and then see where we are after the game.”

Ed Miller has been Ebbsfleet United's communications manager and programme editor since 2014 and responsible for the club website since 2007. Contact him on ed.miller@eufc.co.uk
PrevPreviousFleet 5-0 St Albans City
NextMekki revels in a fired-up FleetNext