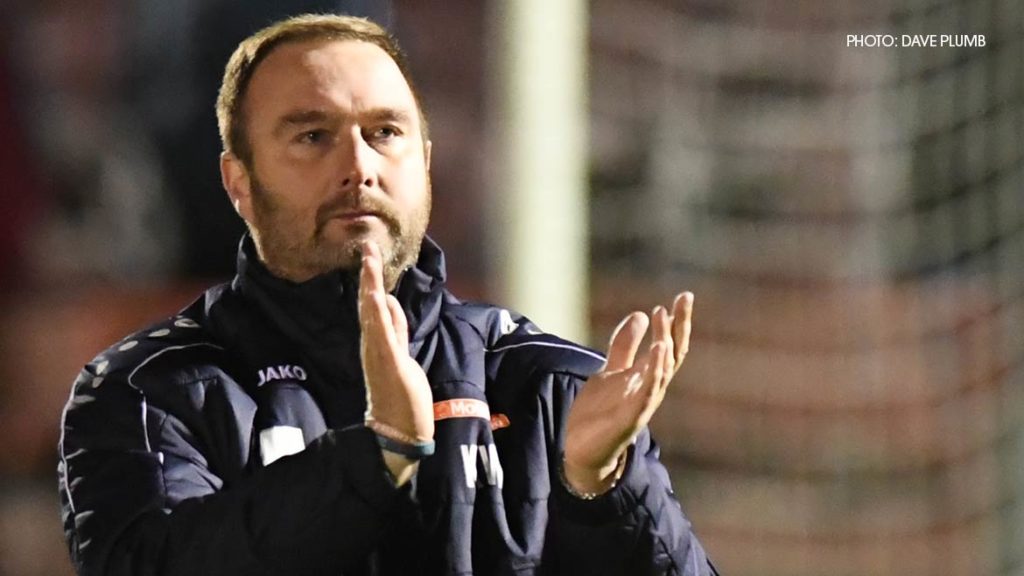 “The confidence is apparent”

And the boss is seeing real evidence that his side, having tightened up at the back, are playing the game with poise and confidence.

“I’m not sure what that is, two defeats in 12?” he told BBC Radio Kent’s Charles Webster. “The confidence in not losing is all of a sudden becoming more apparent to the eye on the side. We’re being confident, strong we’re taking a touch, we’re getting it, we’re passing it when we need to. And long may that continue.

“The pitch was sticky, it was a bit of a blustery day as well, it’s an open ground. I was delighted with the confidence we showed to get on the ball and pass with a purpose. Some of our movements, especially the second half, were excellent and I said that to them.

“We’ve narrowed the gap [in the league] significantly with the run we’ve been on, we’re drawing other teams into it from above us who have not won in a while. I’m confident and this group of players is confident that we’ll get out of the trouble we’re in.”

Trouble wasn’t on the menu as Fleet took a break from league action and sidestepped the banana skin of a cup tie at BetVictor Isthmian challengers Enfield Town. And that was exactly the display Watson wanted from his players.

“I’m ecstatic because it’s always a banana skin when you come to a lower-league club but I thought in general our play was excellent, we passed it well,” he said. “You had to match Enfield’s work rate today first and foremost, which we did and bettered as well. It’s all about attitude in these sort of games and my boys’ attitude from the minute we got here, from the warm-up to the start of the game to the end was spot-on.

“I was really pleased. Yes, Jordan’s made a [penalty] save which might of got their tails up but we’ve had a lot of chances to bury that game and put it beyond doubt. And 2-0’s a scoreline where if they do get one all of a sudden it becomes a little bit edgy and a bit of a game but we were more than value for our win.

“It’s been a tough week but we’ve come here and it’s not been ground out to a team two leagues below. We’ve come here and played very well. That is the way I’d like my teams to play. I said at half-time, Payney tried one crossfield ball, one touch, Frankie tried when a ball came to him, one touch. Today’s pitch wasn’t a one-touch pitch. It was take at least two but don’t take too many, don’t get caught on the ball and second-half, they were excellent.”

Fleet effectively killed the game off with one goal in the first 60 seconds and another before the half-hour mark had elapsed and Watson enjoyed seeing those goals go in.

“Tomi did well [for the first], crossed it,” he said. “I’ve told the boys not to turn down crosses when they get crossing positions, to put it into a dangerous position. Reidy’s got a bit of a fortunate bobble – in a sticky six-yard box the ball fell for him nicely but he’s a goalscorer and he’s prodded it home.

“The second goal was excellent technique – great touch and great volley from Gozie. I thought he was outstanding today and if people want to ask why I brought him off, it’s because he was feeling unwell. I told him he can be unwell every week if we wants to play like that!”

Ugwu wasn’t the only one feeling adverse effects, with Marvel Ekpiteta rested due to a back complaint and Myles Weston also shielded from the rigours of midwinter.

“Westy’s got a little bit of a knee problem as well,” Watson said, “and I did say if I don’t need to use you today I won’t. He would have played, he’s been superb but in the grand scheme of things there are more important things coming up for the club. Having said that, I want to take this club as far as I can in the Trophy. It’s the FA Cup for non-league teams and we’re obviously in the top league so we want to go as far as we can and win games.”

And Watson’s not too bothered about who he’s paired with in the Round 2 draw, though will surely want to avoid a long trip with the ties going national from the next stage,

“I’m not really [bothered who we get],” he said. “It’s an old cliche, if you’re going to go to Wembley and win it, you’re going to have to play the best teams and beat the best teams the further you go so it’ll be nice to stay away from a team in our division. Knowing our luck, that’s exactly what we’ll get but you’ve got to play these teams so it’s no issue who we get.”

Ed Miller has been Ebbsfleet United's communications manager and programme editor since 2014 and responsible for the club website since 2007. Contact him on ed.miller@eufc.co.uk
PrevPreviousEnfield Town 0-2 Fleet
NextTrophy break will do us good says WilsonNext