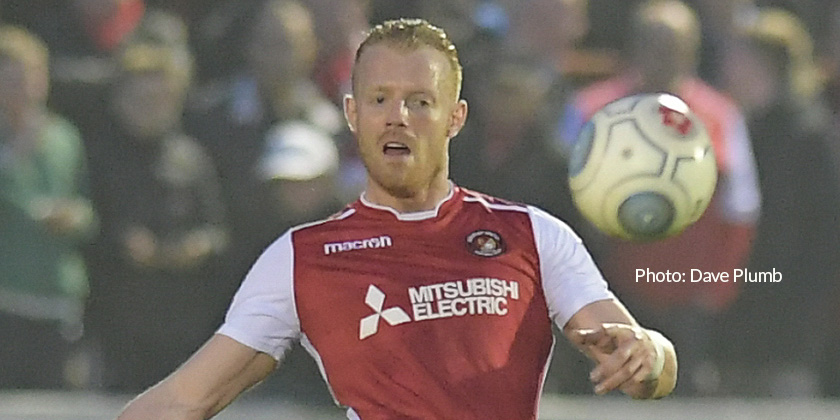 It’s been a while between goals for one of Fleet’s most prolific centre-backs but Kenny Clark couldn’t have chosen a better time to connect with a Jack Powell corner than the 81st minute of last night’s then-goalless affair at Eastleigh.

Clark, who last hit the net in August at home to AFC Fylde, can usually be found amongst the goals in a Fleet shirt, having scored 14 in almost 160 appearances. He could have done so in last night’s first half with an effort, forcing Spitfires goalkeeper Ross Flitney into a smart save from a corner, but there was little Flitney could do late on as Clark powered a header home.

“About time,” said a triumphant Clark in conversation with Charles Webster. “I’m well overdue a goal but it was a tough game coming to Eastleigh. They always make it hard for you and I don’t think we were great tonight but we stood strong and kept going. I think we got our just rewards.”

It took Clark a while to emerge from a victorious changing room and the mood in the Fleet camp was high… without anyone getting ahead of themselves.

“The changing room’s absolutely buzzing at the moment,” said the Fleet defender. “We’ve got a lot of confidence and a lot of belief but we take it one game at a time and see what happens. We just look at our next opponent and focus on them, try and get the three points and perform as best we can and don’t get ahead of ourselves.”

It’s Fleet’s third successive clean sheet, a fact that often goes unnoticed in the other statistics of an 11-game unbeaten run, and Clark knew his defensive colleagues had to stand strong against a big Eastleigh outfit.

“You know what they’re about,” he said. “They’re going to make it tough for us. They’re a very big, physical team. Credit to us, we stood up to it and we had that little bit more.”

A mouth-watering fixture at home to Sutton United awaits this Saturday but Clark says his teammates will enjoy their Wednesday off and then knuckle down to prepare to catch a side that only weeks ago were in the title race.

“We’re going to get in Thursday, focus on Sutton, go through our video clips like we normally do and our analysis and prepare for that game right,” said Clark. “Fingers crossed we come out with the result that we want. It’s our first time back in this league for a couple of years and our goal was to be Top 10 and our goal is still that but whatever extra comes will be good.

“We’re 11 unbeaten, a good bit of form. We did the same last season as well, we’ve just got to keep going and keep our feet on the ground.”

Ed Miller has been Ebbsfleet United's communications manager and programme editor since 2014 and responsible for the club website since 2007. Contact him on ed.miller@eufc.co.uk
PrevPreviousPlaying with a smile on our faces…
NextPitch hire looms at the Kuflink once moreNext