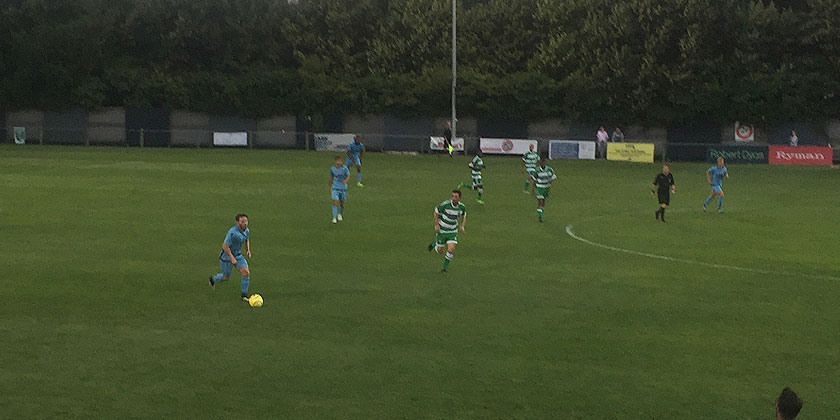 A late Bradley Bubb goal separated the sides at Bayliss Avenue this evening as a well-organised Thamesmead side had goalkeeper Tyler McCarthy to thank for shutting out the Fleet, especially in a first half of numerous chances.

In sultry conditions on a fairly dry pitch, Fleet looked to be in control early on but the home side with winger Warren Whiteley especially weren’t without their forays into the visitors’ half. Ashmore had to be down well to one such attack from the flanks after only five minutes but most of the goal action came at the other end.

Sean Shields was a whisker away from scoring on 10 minutes as he darted in between a defender and the goalkeeper but the ball ran long for him in the six-yard box and McCarthy gathered. Minutes later Jordan Parkes had two efforts cleared out of the penalty area and on several occasions Sam Deering and the central midfield trialist, who showed a good range of passing, played balls into the box that were well met by the Thamesmead defence.

The home side had another effort on 18 minutes when Mark Phillips and Ashmore misread a ball into the box and former Fleet striker Luke Coleman was almost on to it before Ashmore fended him off. Thereafter, Fleet were back on the attack. Trialist Darren McQueen looked set to score with a reactive snapshot from 10 yards but McCarthy did ever so well to block and Danny Kedwell couldn’t keep the rebound down.

McCarthy then denied Parkes and McQueen with a double save as both Fleet players lurked with intent on 20 minutes before Shields looked to have opened the scoring with a low shot to the keeper’s right but once again a gloved hand stretched out and turned it away. And without knowing too much about it, McCarthy then denied Deering whose ball across goal was somehow nudged off target.

Even when McCarthy was beaten, as he was in the 35th minute by the midfield trialist’s free-kick, the post saved him. Phillips limped off holding his groin and then Shields sent a close-range header off target as Thamesmead held firm until half-time.

Jon Miles replaced Ashmore at the break, the former Gosport keeper’s elbow wrapped in an ice pack as he departed. The second half saw the pace slacken somewhat and a raft of substitutions made the flow more disjointed as time went on. Five more Fleet subs were introduced and McQueen showed two more glimpses of his pace and talent before also departing for Billy Holmes.

Fleet upped the ante again in the final 15 minutes and Kenny Clark looked to have won it when a goalmouth scramble saw him chest the ball down and fire it goalwards only for it to come back off a body on the line. Goalkeeper McCarthy then proved himself a useful barricade once more when a ball sat up nicely for Anthony Cook on 12 yards and he struck a good shot that the keeper pushed over the bar.

Just as it looked as if Fleet were to be frustrated, they broke the deadlock on 86 minutes. Billy Holmes showed decent vision from the middle of the park to pick out Bradley Bubb with a raking pass and the Fleet striker advanced on to it and tucked it beneath the advancing McCarthy for 1-0. He had a similar chance on the opposite flank moments later but pulled his shot just wide.

It was hard luck on a dogged Thamesmead side whose resilience will have impressed manager Tommy Warrilow, but Fleet deserved the win on the balance of chances and will be happy enough with it after a gruelling few days.

Ed Miller has been Ebbsfleet United's communications manager and programme editor since 2014 and responsible for the club website since 2007. Contact him on ed.miller@eufc.co.uk
PrevPreviousThamesmead next on pre-season trail
NextFleet forge further Travis Perkins linkNext