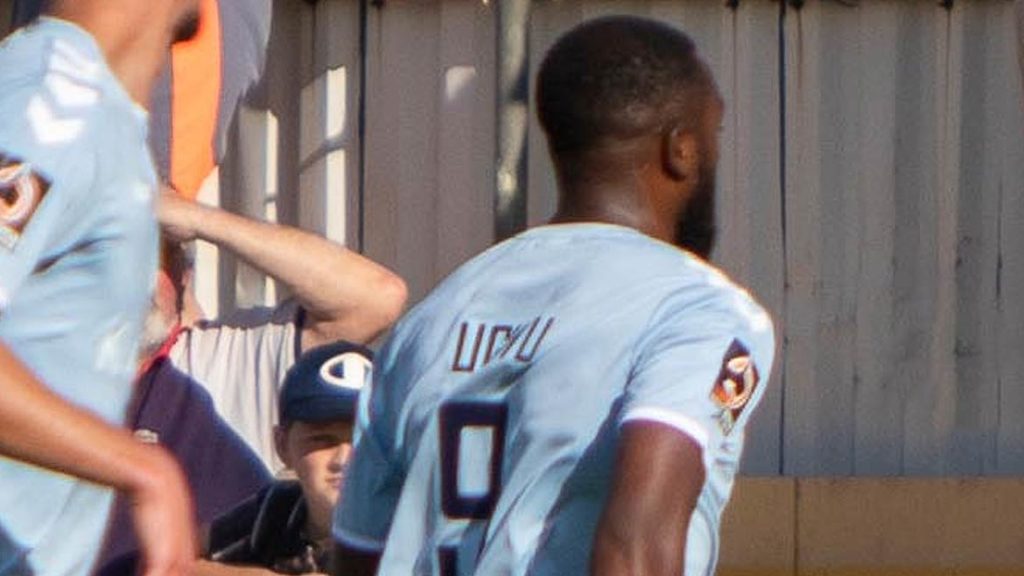 Having not scored against Sutton in five games or won here since 2002, Fleet fans can barely remember anything approaching success at Gander Green Lane.

In the closing stages of this match, they were fearing the worst once more only for their side to sensationally grab the three points after nine minutes of added time, caused in the main by an injury to Jordan Holmes that saw defender Tyler Cordner having to shut out Sutton.

Gozie Ugwu was the man tasked with the penalty to give Fleet their first back-to-back win of the season and the striker seized that opportunity to roll home a late, late winner.

A warm afternoon became a wet one just as the game kicked off but Fleet’s start was solid and competent. Morgan wasted no time in making himself noticed with a fine through ball into Ugwu’s path and Fleet’s No.9 had a second sight of goal from Myles Weston’s delivery moments later.

Weston was in action at the other end before too long when he got a foot in inside the box to break up a Sutton attack but Tommy Wright’s effort still had Jordan Holmes scrambling to scoop the ball behind for a corner.

Fleet went ahead in the 10th minute courtesy of a free-kick 25 yards out. Three blue shirts sized it up but it was Morgan who assumed responsibility, firing a shot against the inside of the post that redirected across the face of the goal and it went in off goalkeeper Jamie Butler’s back.

Sutton lacked spark at that stage as they tried to mount a revival. Holmes had to tip over a half-chance from Harry Beautyman and he got the merest of touches to direct Wright’s weighty effort into the side netting.

But Fleet let the home side back into it on 23 minutes. Andre Blackman wanted time to turn away from danger 35 yards out but he was caught in possession by David Ajiboye who advanced, sized up the target and let fly with an eye-catching effort that zipped past Holmes’ despairing dive.

It was an entertaining opening but the quality didn’t last beyond that goal and the remainder of the half was something of a midfield struggle.

Weston and Frankie Sutherland tried to pick out passes into Ugwu, who fired the best of them over the bar under pressure. At the other end, Marvel Ekpiteta had to race across his six-yard box to head clear a cross by Jon Barden on the stroke of half-time but it seemed the conditions were in the ascendancy as the teams departed for the break.

It was Sutton who emerged the more lively of the sides and Fleet struggled to get out of their half in the first few minutes after the break. Holmes was out smartly to parry an Ajiboye shot as the Sutton player was afforded time and space on the right of the box.

Fleet had to wait 10 minutes to create anything and Weston’s persistent run from wide into the box teed up a chance in the six-yard box for Ugwu. He connected but Butler somehow got in the way and Sutton cleared.

Sutton resumed the attack and Wright got behind the Fleet defence to send a cross skidding along the penalty area that was begging for a touch but the yellow shirts were too far behind it.

But Fleet got their noses in front again on the hour mark. A corner from the right was half-cleared by Kenny Davis and it sat up just outside the box for Payne. He had options to return it into the danger zone but chose to hit an excellent dipping volley that arrowed past Butler and under the bar.

The visitors improved and managed to hold Sutton at bay for a period but the home side got back into it from a set piece. That arrived on 74 minutes when Rob Milsom’s corner was sent spinning towards goal and Holmes, who had been contained between several Sutton players on numerous occasions at corners, couldn’t fight his way out before Omar Bugiel stole in to force it home at close range.

Sutton sensed victory and they had another opportunity on 81 minutes when substitute Kyel Reid brought down a delivery and hit a shot goalwards that went through Holmes’ hands but the goalkeeper saved it instead with his face.

Clearly concussed, it took five minutes of treatment before Holmes was deemed unfit to continue and without a goalkeeper on the bench, Tyler Cordner had to don the gloves.

With nine minutes added, it was anxious times as the home side won corners, throw-ins and free-kicks but Cordner did enough to keep Sutton frustrated. He punched one clear and tipped another over the bar, before fumbling one catch that he grabbed at the second attempt as Fleet fans had their hearts in their mouths. A Milsom free-kick was swung in and diverted off the post but still Fleet’s goalmouth held out.

The home fans were becoming increasingly upset at their team’s inability to get a shot at Cordner and they were made to pay as the time ticked down. A break upfield saw Reid fouled as he tried to spin around Dan Matsuzaka. From that free-kick the ball curled towards substitute Jamie Grimes and he was pulled down by Bugiel, the referee awarding the Fleet our first penalty of the season.

In those dramatic circumstances, players could have been forgiven for passing the responsibility but as designated spot-kick taker Ugwu stepped up and went for precision over power, laying the ball to the left of the goal for the winner. And scenes aplenty amongst the fans behind the goal.

Ed Miller has been Ebbsfleet United's communications manager and programme editor since 2014 and responsible for the club website since 2007. Contact him on ed.miller@eufc.co.uk
PrevPreviousSutton preview: points are paramount
NextYou make your own luck, says jubilant WatsonNext