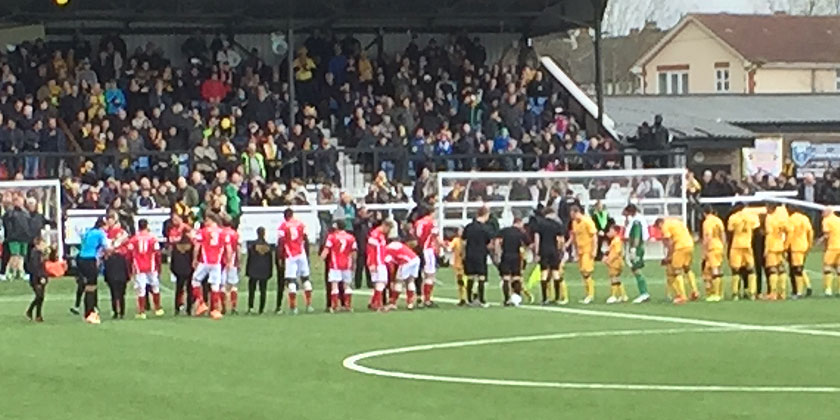 Fleet’s recent record at Gander Green Lane didn’t see an upturn when it mattered most as Sutton United all  but confirmed their automatic promotion spot with a 2-0 victory in front of a 3,142 attendance. Fleet had the best of the opening spell but once the home side got their noses in front, they rarely looked troubled, and a penalty on the stroke of half-time simply put another nail in the visitors’ coffin.

There was just one change to the starting line-up with Anthony Acheampong in for Kenny Clark and Fleet took the upper hand in the early exchanges as Sutton initially seemed unsettled, though they won an early corner. After that, however, the red shirts had a couple of chances as Sean Shields attacked Dan Spence in the left-back position.

It was Shields who found his way through on four minutes after being played in by Matt Godden but Ross Worner stood up to it and made the save. Another neat move four minutes later saw Matt Fish’s ball into Stuart Lewis turned into Godden’s path but his shot lacked power and again the goalkeeper gathered.

Slowly Sutton marshalled their midfield and Tom Bolarinwa down the right caused a few problems. Bedsente Gomis got sight of goal and Nathan Ashmore had to be nimble enough to stretch for his shot while Shields timed an excellent tackle on the edge of the box to perfection to stop Nicky Bailey as Sutton broke at speed. Back came Fleet and John Paul Kissock went down under a Jamie Collins challenge that produced noisy shouts for a penalty but the referee immediately waved away the protests.

Collins then wasted a free-kick for Sutton while Lewis and Godden combined at the other end but with the Sutton defence second-best, Godden hit his shot off target. It was difficult to see where a goal was coming from and when Sutton grabbed one on 25 minutes, it was something of a surprise. Bolarinwa was afforded too much space to attack down the right and his cross into the six-yard box was flicked over Ashmore and into the roof of the net by top scorer Dan Fitchett.

Fleet’s temporary spell in the ascendancy ended with that goal and Sutton seemed confident enough going a goal in front to simply soak up any balls forward from the visitors. The remainder of the first half ebbed away with little creatvity or cutting edge by either side, at least until time added on when Sutton grabbed a crucial second. A break down the middle by Gomis delivered a ball into the middle of the Fleet box and as Tom Bonner and Bryan van den Bogaert moved to close down Ross Stearn, the player went down and the referee awarded what seemed like a fairly soft spot kick. Gomis made no mistake, sending Ashmore the wrong way for 2-0.

That killer blow gave Fleet little hope against a Sutton side unbeaten in 23 games and the home team simply and effectively shut up shop for the next 45 minutes. Fleet threw on Anthony Cook for Kissock and he had a couple of runs that extended Kevin Amankwaah but by and large, Sutton’s strength and physicality simply steamrollered Fleet’s build-up play.

On 50 minutes, Parkes and Cook played some neat football and a cross was on Kedwell’s head at the far post but his effort was saved by Worner. Sutton still looked capable of adding a third and Fitchett headed over as the Fleet defence nervously tried to clear a goalmouth scramble.

Fleet kept the pressure on in the Sutton half but balls across the back line weren’t testing the goalkeeper and when he was called into action, Worner mopped up effectively, gathering crosses and set pieces at will. Parkes had a late effort parried to safety by Worner, as did Godden, but Fleet just didn’t get enough clear sights on goal and as the half wore on, both teams seemed to have mentally settled for their respective positions.

Having led the league for seven months, Fleet’s grip on the top spot has been prised away by a remorseless Sutton who made it 24 games unbeaten with this win and only a few days after taking first place, they now look set to stay there. Barring a miraculous set of results and glut of goals, Fleet will now cast an eye to their likely play-off contenders and seek to get the point against Eastbourne that will all but guarantee second place.

Ed Miller has been Ebbsfleet United's communications manager and programme editor since 2014 and responsible for the club website since 2007. Contact him on ed.miller@eufc.co.uk
PrevPreviousView video of Dean Pooley’s Burma challenge
Next“Sutton deserved their win” says Fleet bossNext