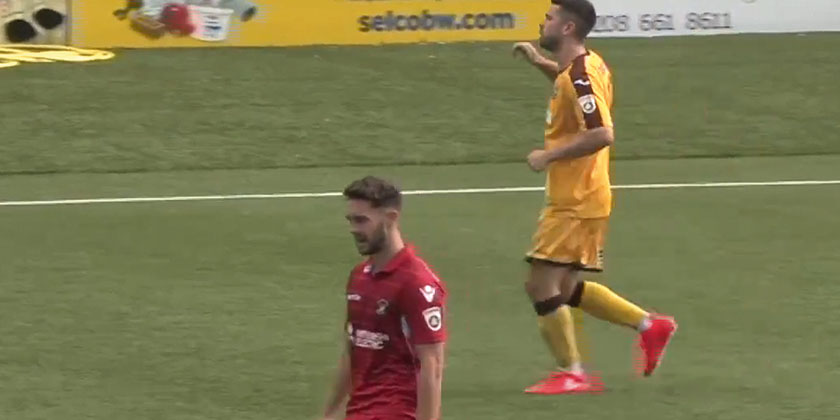 Fleet were able to welcome Dean Rance back in their final pre-season friendly but still had absences in defence and attack as last season’s rivals Sutton United scored twice in the second-half to win an often physical encounter.

A fairly sedate opening saw Jack Powell and Danny Kedwell combine to set up Bradley Bubb but the new Fleet striker couldn’t quite get on the end of the cross.

Sutton started to see more of the ball in the Fleet half from the quarter-hour mark and Nicky Bailey had a couple of fierce efforts from distance. The visitors defended well to Sutton’s probing attacks, with Roarie Deacon involved in much of their good work, almost springing the offside trap which would have left him clean through and then being denied a penalty shout shortly before half-time.

One of Fleet’s better chances was also moments before the break, Powell’s free-kick whipped in and Jordan Parkes’ resulting header just off target. Parkes was in on the action just after half-time as well, firing Nathan Ashmore’s huge ball forward into the side netting.

However, Sutton led 12 minutes into the second period. A corner was delivered on to the head of Jamie Collins who rose beyond Kenny Clark and his powerful effort was sent beyond Ashmore for 1-0. Powell almost notched a cheeky equaliser straight from the kick off, launching the ball upfield and Ross Worner had to make a fingertip save to push it over the bar.

And four minutes later it was 2-0 with Fleet caught on the break from their own corner. A clearance upfield saw the men in red exposed on the right and although the visitors got bodies back, a Ross Stearn cross into Dan Fitchett saw the U’s top scorer of last season reach the ball first and head home.

A number of Fleet subs were introduced and the visitors had a few late chances, Worner first to a Sean Shields cross ahead of Darren McQueen and then he cut out a Kedwell effort. Clark went close from a free-kick and another set piece from Powell was won by the lively Shields but Sutton proved resilient to whatever Fleet could muster and their defence snuffed out the best opportunities.