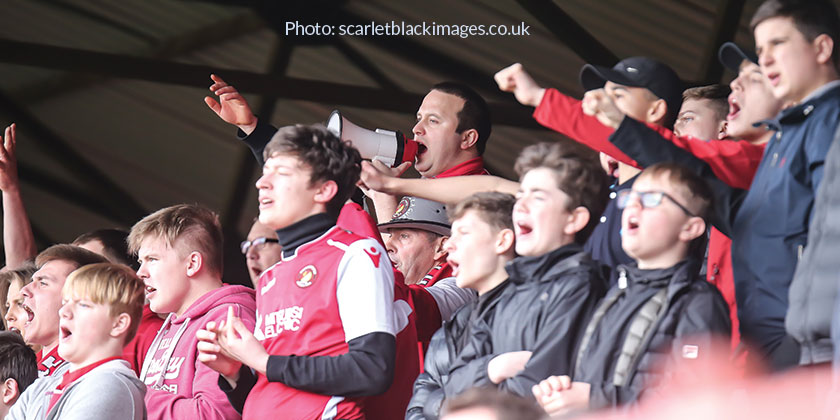 It wasn’t so very long ago (three years in fact) that an Ebbsfleet-Sutton fixture was a meeting of National League South also-rans. In Daryl McMahon’s last season as a player, lower mid-table Sutton were about to do damage to Fleet’s faltering play-off challenge, with both sides finishing 2014/15 well outside the play-off positions.

Fast forward to Saturday and both clubs will be after the three points that make the right to play for promotion to the EFL a little bit more assured. It’s been a fantastic voyage for both sets of supporters over the past two seasons and there’s still a chance, regardless of Saturday’s result, that both clubs could come against each other further down the line should play-offs be the destination.

Sutton, of course, won the crucial encounter in the National League South title race almost exactly two years ago but Daryl McMahon pays that no mind and any talk of “revenge” is a million miles from his concerns.

“That season’s just not relevant anymore,” he said. “We’ve played each other three times since I’ve been manager and it’s all square with one win apiece and a draw. But it’s not about the past, it’s about Saturday. I get on well with Paul Doswell, I nearly signed for him a couple of times and I played for his assistant Ian Baird at Eastleigh. I know both of them well, I know their team pretty well and they know us well. We’ll both just be focused on our teams performing on the day.”

The Fleet boss is adamant his side should go out to play with the freedom and expression that has marked their recent superb form. His side may well have climbed into the play-off places at last but McMahon insists the pressure is with other clubs.

“Yes, it’s a big game,” he said. “But I think another one with the pressure on the other team. Sutton were the only team until two or three weeks ago that were chasing Macclesfield down. They were second and they’ve fallen away a bit so it’s another game for us to go out and enjoy like we have been doing because of the good run we’ve been on. We’re confident and it’s about keeping on doing what we’ve been doing. I expect Sutton to come out and look to reverse their recent form and of course it will be tough but we’ve had plenty of tough games lately and we must continue that positive train of thought.”

Fleet had to be resolute to gain a 1-0 win at Barrow and patient to record the same scoreline at Eastleigh but McMahon won’t change his outlook home or away, regardless of the opposition.

“I think in all the other games in our run we have come out first and tried to score,” he said. “We just didn’t take chances in some of them. We had a couple of good chances against Macclesfield in the first five or 10 minutes that we didn’t take. I don’t think there’s ever been games where our tactics are to sit back and see what happens. We always look to score first. It doesn’t feel any different whether it’s the league leaders or a team like Eastleigh with nothing to play for.”

The players had their usual Wednesday off following the trip to Eastleigh and the management staff are treading carefully ahead of three games in eight days on the back of a busy period before that.

“A lot of it just about keeping it ticking along,” McMahon said. “On Thursday we obviously do analysis and intensive preparation for the next game and the next opposition. The players who played Tuesday have more of a warm-down couple of sessions and the lads that didn’t get as many minutes will train more fully. We’ll work on our set pieces, pre-match stuff, but it’s mainly low intensity to save the energy for Saturday. But the players are enjoying it and when you’re on a roll like we are, the energy and confidence sustains you.”

Sutton have won only one of their last seven matches and if they are to consolidate their place in the top positions they will need to do something they have never done in Northfleet and that’s win having recorded two draws and six defeats from eight appearances at Stonebridge Road.

The U’s still possess plenty of players from their 2015/16 title-winning season, with skipper Jamie Collins and Nicky Bailey remaining central to the side’s success. Collins returns after a recent suspension while other familiar names in the side include Craig Eastmond, Ross Stearn, Craig Dundas, former Fleet loanee Louis John, Tom Bolarinwa and Dean Beckwith. Manager Doswell has supplemented those players with experience in the form of ex-Braintree midfielder Kenny Davis, former Welling and Peterborough star Harry Beautyman and Barrow striker Byron Harrison.

Bolarinwa is an injury doubt as is fellow midfielder Simon Walton. Young striker and top scorer Tommy Wright, who managed 50+ goals on loan at Salisbury last season, is likely to lead the line, while former Welling striker Ross Lafayette – recently returned from a loan period at Maidstone – is also in the running.

Saturday’s game is segregated. Sutton United supporters should use the Swanscombe End turnstiles which are situated 150 yards to the left of the home entrance. Supporters are encouraged to use Ebbsfleet International Car Park C (£3) and not park along Thames Way which is patrolled by traffic officers on match days. Turnstiles open at noon for Community Day, with funfair stalls and rides for children and music provided by the No Limit Street Band and Knights Academy.

Ed Miller has been Ebbsfleet United's communications manager and programme editor since 2014 and responsible for the club website since 2007. Contact him on ed.miller@eufc.co.uk
PrevPreviousPitch hire looms at the Kuflink once more
NextFleet 0-1 Sutton UnitedNext