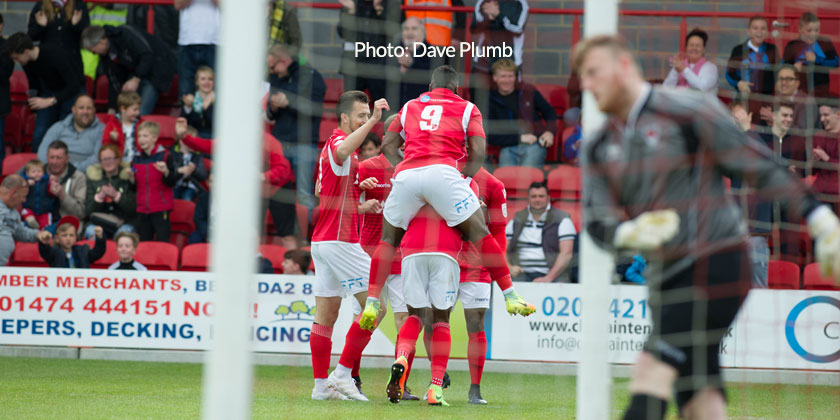 Success is still there to be had, says boss

Daryl McMahon’s message after Fleet wrapped up their league campaign on 96 points was that his side are still in a position to make the season a big success. “Me as a person, them lads in the changing room, we’re fighters and we bounce back,” he told BBC Radio Kent’s Matt Cole. “You work hard to be successful and we’re still in the situation where we can be successful and we’ve got a fantastic changing room.”

Despite achieving the second highest points total in the club’s history and not clinching the title, the manager was philosophical about the outcome. “The squad have been outstanding,” he said. “Since I’ve been here, that’s 180 points in 84 games which to not win the title in two seasons when you think about it, is quite incredible. But it happens.

“We congratulate [Maidenhead], they’ve had a fantastic season and to get 98 points is a great achievement and I wish [Alan Devonshire] all the best.”

McMahon admitted it was clear from the atmosphere around the ground that the Magpies had done their job at Margate and he thought his side’s second-half performance eased off a little as a result.

“The players knew what was happening elsewhere and it probably knocks the wind out of your sails a little bit. We started brilliant, like we asked them to do. We asked for an early goal to try and put some pressure on because we thought that would get down to Margate but to be fair to Maidenhead, they’ve been great all season as well, they got the win and they’ve won the title. You’ve got to try and stay focused. I thought we were in the first half, I think second half we didn’t look like the side we have been for the past two or three months.”

The Fleet boss doesn’t think there’ll be any hangover, however, as his side negotiate the first leg of the play-off semi-finals. “I don’t think there was anything to learn from today’s game. You could tell from the atmosphere around the ground, you could tell the score in the other game and that affects the tempo of the game.

“But we’re definitely in form and we look forward to the play-offs now. We’ll re-focus ourselves on Monday for Wednesday’s game. We’ve been to Hampton a couple of weeks ago, it’s a tough place to go. The pitch is not the best and they’ll probably make it as bad as they can for us, they did last time as they admitted after the game! It’ll be a tough game but it’s always tough games in the play-offs.”

And McMahon will stick with the squad at his disposal rather than use any of his loan players who are still contracted to the Fleet through May. “I think the side this year is better than the side last year. The points tally tells you that, the goals column tells you that and the quality of the football as well. You’ve got to think of the dynamics of the changing room. The team that we had has obviously won 17 games and three draws so we’ll stick with what we’ve got.”

Ed Miller has been Ebbsfleet United's communications manager and programme editor since 2014 and responsible for the club website since 2007. Contact him on ed.miller@eufc.co.uk
PrevPreviousFleet 1-0 Oxford City
NextVote for Nathan! Plus two England C call-ups!Next