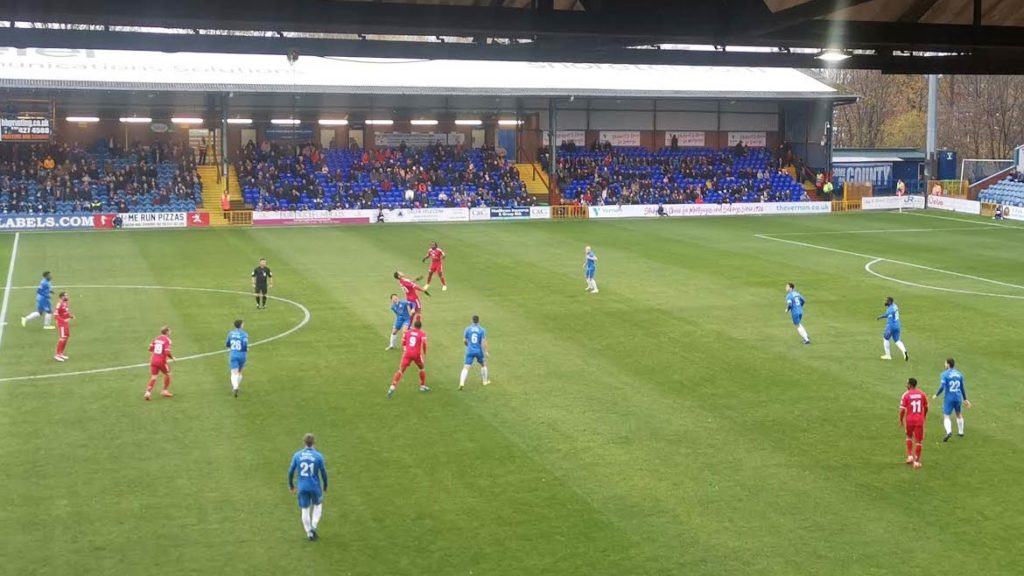 Fleet were a minute or two from a first win at Edgeley Park but instead had to settle for Stockport’s first draw on their own ground this season as the home side fired home a late free-kick equaliser.

The visitors held up well to County’s second-half pressure after Tomi Adeloye’s 35th minute opener had put the Fleet within a whisker of all three points.

There were three changes for the Fleet, with Adeloye making his first start while Alex Reid and Ayo Obileye joined him in place of Lawrie Wilson, the suspended Josh Umerah and Charlton-bound Albie Morgan. Jordan Holmes, after a gruelling flight back from China this week, made do with the bench while Harry Palmer continued in goal. Alex Lawless was out altogether with a recurrence of his injury.

Stockport led the charge from the start, with Tyler Garratt engaging Marvel Ekpiteta in plenty of one-on-ones. Fleet struggled to get a hold on the game initially and Garratt soon gave way to Ben Jackson as the pivotal figure in the Hatters side as he continued to ask questions of the Fleet back line.

He whipped a cross from the left into the box that Jack King had to get a foot on eight minutes in and from then on, the home side kept the pressure on with a couple of corners. Grimes had to head low to keep one of them away from Palmer’s goal but then he succumbed to a back injury and was replaced by Andre Blackman.

That meant Fleet had to change from a four to a three at the back but Stockport continued to press and twice in as many minutes Palmer had to deny the lively Jackson, once with his feet as the County man was free to the left of the box and once from a cross into the middle.

The Fleet goalkeeper was then caught off his line as he came for a long ball to cover his defenders and when it was recycled into the middle, his side were relieved to see Jackson fire over the empty goalmouth.

Fleet had barely had a sniff at the Stockport goal before Reid almost got on the end of a through ball on 27 minutes but that was quickly snuffed out as Stockport resumed the advantage.

Ekpiteta was booked for a foul on Devante Rodney as he hared down the right but the busiest man for the visitors was physio Calum Green who was called on to administer treatment five or six times with an increasingly impatient home support ringing in his ears.

On 34 minutes Adeloye’s shot was blocked and Weston teed up a curling effort from outside the box that swung wide but the visitors were just getting started.

A minute later, in an excellent move, Weston found Josh Payne who released Ugwu wide on the right. His cross was the perfect height as it came to Adeloye to meet 12 yards out and the shot was controlled and on target, going in off goalkeeper Ben Hinchcliffe.

That brought Fleet out of their shell and Adeloye almost returned the favour as he supplied Ugwu with a pass from the middle and the Fleet top scorer swept a shot just past the far post.

Whereas the opening half hour was a little drab, the last quarter was entertaining fare. Fleet should have made it 2-0 five minutes before the break when Blackman’s useful run into the box from his wide left position saw a good delivery along the six-yard box. Weston and Reid were both on it but Stockport managed to hack the ball free.

At the other end, King was fortunate that his short header only went for a corner and from that, Frank Mulhern crashed an effort off the underside of the bar.

That still wasn’t quite the end of the action, however, as on the stroke of half-time, Fleet got in behind again and after two efforts at the Stockport goal, Obileye’s turn and shot whistled just wide.

Fleet brought Tyler Cordner on for the cautioned Ekpiteta at the beginning of the second half but almost saw their lead disappear within moments of the restart when Garratt’s vicious shot from the left skipped across Palmer’s goal.

It was an otherwise slow start to the second half but it livened up and with County attacking towards their noisy home end, Fleet were up against it for spells.

Fleet were mainly restricted to attacking on the break but it made for an end-to-end encounter at times. Palmer made a solid save as Jackson got round Ugwu down the right and he had to punch away a corner as the Fleet goal came under some sustained pressure.

Payne drew a save from Hinchcliffe, Ugwu was almost on to Weston’s fine long ball forward and Frankie Sutherland let fly with a decent drive from distance but the Stockport goalkeeper wasn’t too busy as he watched his teammates somewhat laboriously press for an equaliser.

Strong and pacy, it was almost too quick at times from County who – when they didn’t overplay their hand – found King and Cordner to be in fine form. Behind them, Palmer continued to get a hand on most things sent his way and on 83 minutes produced a top-drawer save from Mulhern’s weaving run and shot.

King and Cordner got in the way of another couple of efforts and substitute Alfie Egan succeeded in stopping the one-way traffic in midfield as Fleet defended well in a hectic last 10 minutes.

But having seemed to have stemmed the flow as the board went up for time added on, County – masters of the late goal – earned a free-kick 25 yards out. Much as Weston had equalised against Hartlepool for the Fleet a week earlier, substitute Sam Walker sent in a searching effort that curled over the wall towards the home strikers but cleared them all to sail past Palmer to end the game all square.

Ed Miller has been Ebbsfleet United's communications manager and programme editor since 2014 and responsible for the club website since 2007. Contact him on ed.miller@eufc.co.uk
PrevPreviousPlenty at stake in Stockport
NextAn off day with the ball, says Fleet bossNext