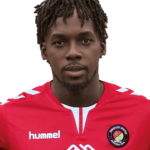 Former Charlton and Stoke City youngster with plenty of non-league experience who signed for the Fleet in October 2019, having trialed at the club earlier in pre-season.

Having played for Stoke’s U23s, Tomi went on to feature for Macclesfield Town, Chelmsford City, Leatherhead, Dover Athletic and Welling United. Most recently he has ben at FC United of Manchester, Hartlepool United and Dagenham & Redbridge, where he scored their winning goal against the Fleet last season.