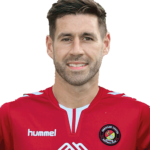 Experienced former Southend United and Republic of Ireland youth international signed from Stevenage in January 2020.  A Fulham academy graduate, Michael signed for Swindon Town in 2008, making 100 appearances for the Robins in Leagues One and Two. He spent seven years from 2011-18 with Southend, clocking up more than 250 appearances for the Shrimpers and he played in the Wembley final that clinched promotion to League One in 2015.

He was a regular in the Stevenage squad last season after he signed for them in summer 2018 and returned to the club earlier this season, featuring 17 times in League Two from October to January when he signed for the Fleet.