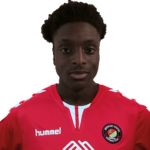 A central defender who can also operate on the right, Mathew progressed via the club’s academy last season.

The teenager played in the Kent Senior Cup and made his National League debut as a substitute in the final game of the 2018/19 season. He signed first-team forms in August 2019.