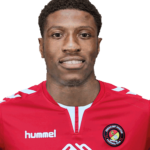 Versatile defender signed on loan from Newport County in October 2019. A central defender who can also cover at full-back, Marvel came through Oxford United’s academy alongside twin brother Marvin, now at Leyton Orient.

Marvel dropped into non-league with North Greenford United while still a teenager but has worked his way up through the levels, playing for Chelmsford City and moving on to Bishop’s Stortford and Hungerford Town, working with Fleet’s caretaker manager Kevin Watson at both those clubs.

At Hungerford last season season, Marvel was captain and won three player of the year awards. He came to Newport’s notice after a successful season and signed a two-year contract with the League Two club in the summer.